1. Cytology the outer layer of cytoplasm in some cells, esp protozoa, which differs from the inner cytoplasm (see endoplasm) in being a clear gel
2. Spiritualism the substance supposedly emanating from the body of a medium during trances
Collins Discovery Encyclopedia, 1st edition © HarperCollins Publishers 2005 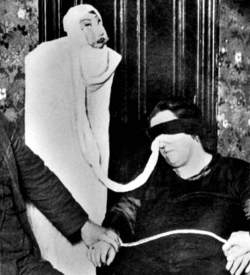 Spiritualists attempt to detect ectoplasm emerging from a medium during a trance at a séance. Fortean Picture Library.

Ectoplasm (literally, “exteriorized substance”) refers to a phenomenon that began to appear in Spiritualist séances in the late-nineteenth century. Reports circulated that a mysterious vapor-like substance would on occasion flow out of the body of a medium while in trance. Increasingly, mediums claimed that the substance would resolve itself into the likeness of a person, a physical representation of an individual who resided in the spirit world. Often this person was identified as the spirit control who always worked with the medium and guided the séance from the spirit realm.

As early as the mid-eighteenth century, Swedish visionary Emanuel Swedenborg (1688–1772) claimed to have seen a vapor steaming from his body. Passing references to similar phenomena are found even earlier. However, it was not until the early twentieth century that any systematic attempt to study ectoplasm occurred. In 1908 Baron Albert von Schrenck-Notzing (1862–1929), a German psychical researcher, and Charles Richet (1850–1935), a French researcher, began close observation of Eva C. (public name of Marthe Béraud), a materialization medium. They and a later observer, Gustav Geley (1868–1924), published reports concerning the genuineness of the phenomena they had observed, in spite of stringent attempts to detect any fraud.

The early observations of ectoplasm were photographed, and these pictures show a variety of amorphous substances that seem to emanate or ooze from the several natural orifices of the medium’s body, most frequently the mouth. Schrenck-Notzing summed up the early research in his 1920classic, The Phenomena of Materialization, in which he asserted, “We have very often been able to establish that by an unknown process there comes from the body of the medium a material, at first semi-fluid, which possesses some of the properties of a living substance, notably that of thepower of change, of movement and of the assumption of definite forms.” Obviously, the existence of such a substance would have immense implications for our understanding of the world.

Over the next few decades a number of famous mediums, such as Mina S. Crandon (1889–1941), better known as Margery, and a variety of notable observers including Arthur Conan Doyle (1859–1930) offered their support to the idea of ectoplasm. Various psychic researchers speculated on the nature of ectoplasm and what its existence would mean for understanding the physical universe. However, beginning in the 1920s, one after another of the physical mediums was discovered in fraud, a result of the more sophisticated forms of detection. A significant event was the series of discoveries made following the death of Gustav Geley. Never-published photographs of Eva C. clearly showed fraudulent activity controlled by the medium’s constant companion, Juliette Bisson. Wires running from Eva C.’s head were supporting the supposed ectoplasmic material.

A series of exposures of fraudulent activity led to the rapid decline of materialization séances and the claims to produce ectoplasm, though talk of the reputed substance remained a popular topic within Spiritualist circles, often accompanied by a bemoaning of the disappearance of the great materialization mediums.

Claims to produce ectoplasm and attempts to demonstrate its appearance did not disappear altogether, though the practice was banished to the fringes of the Spiritualist community. As late as 1960, parapsychologist Andrija Puharich (1918–1995) was allowed into materialization séances at Camp Chesterfield, in Indiana, and found the use of phosphor-covered cheesecloth being used to fake ectoplasm. These were published in a Spiritualist periodical, but similar false séances may still be viewed at Chesterfield and a few other Spiritualist centers to the present. Lamar Keene, a medium who operated in that subculture, left the movement in the mid-1970s and authored an exposé of it.

Recently, a new generation of both Spiritualists and psychic researchers have developed a fascination with the possibility that ectoplasm really does exist. In 1988 English professor John R. Crowley, a member of the Board of Trustees of the American Society for Psychical Research, wrote an article defending the reality of ectoplasm. Two years later, British Spiritualists founded the Noah’s Ark Society, devoted to the revival of physical mediumship. Although small, it has become an international organization. Its periodical, the Ark Review, includes articles on ectoplasm, among other related subjects. In spite of this renewed interest, there is little evidence of the existence of ectoplasm, certainly not enough to indicate it was ever more than the center of an elaborate hoax worked by a small group of mediums operating as stage magicians. A heavy burden of proof rests on any who would advocate the existence of ectoplasm in the contemporary world.

The weakness of arguments for the existence of ectoplasm is one of the factors that has led to the decline of support for traditional Spiritualism, although other movements supportive of contact with spiritual entities thrive. 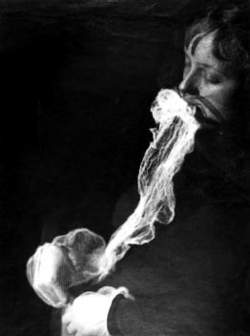 The word “ectoplasm” comes from the Greek ektos and plasma, meaning “exteriorized substance.” Professor Charles Richet (1850–1935) coined the term in 1894. Ectoplasm has been described as the spiritual counterpart of protoplasm. It is a white substance that appears to stream out of the body of some mediums during a séance. It can come from any orifice, such as the ears, nose, eyes, mouth, nipples, vagina, or even from the navel. It can form itself into a materialized spirit, or part of a spirit (an arm, hand, or face, for example) in a materialization séance. It can also extrude from the medium’s body and extend to support a trumpet or a levitating table. It is often accompanied by a slight smell of ozone. Harry Edwards’s book The Mediumship of Jack Webber (1940) contains a number of excellent photographs, taken in infrared light, showing ectoplasm issuing from the British medium Jack Webber.

Ectoplasm can be photographed with infrared film but seems to disappear in white light. If exposed to a sudden flash of white light, ectoplasm will immediately snap back into the medium’s body, often times causing injury to the medium. As early as 1700, Emanuel Swedenborg (1688–1722) spoke of “a kind of vapour streaming from the pores of my body.” Gustav Geley (1868–1924), when investigating Eva Carriere (known as “Eva C”), spoke of a dimly phosphorescent column which formed beside him. A luminous hand slowly emerged out of this column, perfectly formed and of natural size. This spirit hand then patted him several times on the arm in a friendly way.

Some mediums who do not usually produce materializations often speak of feeling a “cobwebby type of feeling” over the face, which is probably a beginning form of ectoplasm. Elizabeth Hope (1855–1919), who used the name “Madame d’Esperance,” described a feeling of being “covered with luminous spider webs.” She said, “I feel that the air is filled with substance, and a kind of white and vaporous mass, quasi-luminous, like the steam from a locomotive, is formed in front of the abdomen.” At another time she said, “It seemed that I could feel fine threads being drawn out of the pores of my skin.”

Guiley states, “In experiments in the early 1900s with her colleague, Juliette Bisson, and later with German physician Baron Albert von Schrenck-Notzing, [Marthe] Beraud would produce masses of amorphous white or gray material. She was thoroughly examined before each sitting, often wearing tights or a veil. Schrenck-Notzing even had Bisson examine Beraud’s genitalia to verify that she concealed nothing.” The ectoplasm was described as “sticky, gelatinous icicles dripping from her mouth, ears, nose and eyes and down her chin onto the front of her body.” If touched, the ectoplasm would immediately withdraw into the body. It could, however, pass through fabric material without leaving a trace. A Canadian medium, “Mary M.” produced ectoplasm in which miniature human faces appeared. Medium Florence Cook (1856–1904) produced enough ectoplasm to form the life size figure of her spirit guide Katie.

Unfortunately some fraudulent mediums produce what looks like ectoplasm but is actually fine cheesecloth, gauze, or similar. Helen Duncan (1897–1956) was once caught with ectoplasm made from a combination of wood pulp and egg white, and another time with cheesecloth. One fraudulent medium admitted that he had drawn a face on gauze rolled in goose fat.

the peripheral layer of animal and plant cell protoplasm characterized by a lower concentration of organelles and other components than in the endoplasm, the other major part of the cytoplasm. The ectoplasm is very distinct in many protozoan and some tissue cells, for example, fibroblasts. The subdivision of cytoplasm into ectoplasm and endoplasm is arbitrary.