(1943–  ) sociologist, civil rights activist, sports consultant; born in East St. Louis, Ill. He attended San Jose State College (Calif.) where he played basketball and was a discus thrower. As a young African-American graduating into the 1960s and well aware of racial injustice, he chose to combine an academic career with that of an activist. By 1968 he had gained national attention by urging African-American athletes to boycott the summer Olympics; he failed in this goal but was widely credited with influencing two sprinters, Tommy Smith and John Carlos, to give the Black Power salute on the victory stand. By 1970 he had joined the sociology faculty at the University of California: Berkeley, (becoming a tenured professor in 1977) and along with his academic career, which included such books as The Sociology of Sports and The Revolt of the Black Athlete, he served as a consultant to the San Francisco 49ers football team and the Golden State Warriors basketball team. In 1987, after Al Campanis made his racially insensitive remarks on national television, Edwards was hired by Peter Ueberroth, the commissioner of baseball, as a special assistant to promote the hiring of African-Americans, Latinos, and women in more administrative and managerial jobs in organized baseball. Edwards was in demand on the lecture circuit and on television on all issues relating to minorities in sports, and despite his somewhat intimidating appearance—he was 6 feet 8 inches tall, had a shaved head, and often spoke intensely—he never actually changed his simple and reasonable message: that African-Americans and other minorities get a fair deal in sports and elsewhere in society.
The Cambridge Dictionary of American Biography, by John S. Bowman. Copyright © Cambridge University Press 1995. Reproduced with permission. 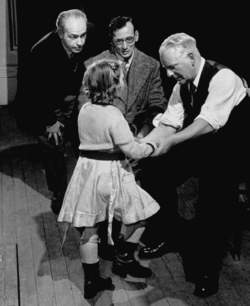 One of the most prominent Spiritualists of the twentieth century, Harry Edwards, shown here in 1952, led a ministry centered on his remarkable healing powers. Time Life Pictures/Getty Images.

Harry Edwards, the most outstanding Spiritualist healer of the twentieth century, was born in London on May 29, 1893. He grew up in Wood Green and at the age of fourteen completed his schooling and was apprenticed to a printer. His apprenticeship ended shortly before he joined the army in 1914. His unit was sent to India during World War I. While there he was promoted to captain and was sent to Iraq to build a railroad through the Middle East. He completed the war at the rank of major.

Upon his return to England, he married a childhood girlfriend, opened a printing business,and became involved in politics. A nominal member of the Church of England, in 1936 he visited a Spiritualist meeting looking for answers concerning the death of a nephew. He subsequently not only became deeply involved, but became a medium (a person believed able to directly contact the spirits of the deceased) himself. His fellow mediums, however, told him that he was more gifted as a healer and should concentrate his efforts in that direction. Their counsel was confirmed by his early experiences on behalf of several very ill people, some of whom he never met.

A healing ministry developed during the hours he could take from his printing business, weekends and evenings, and continued to grow until World War II broke out. He enlisted in the Home Guard and, during the war, healed as opportunity arose. One result of the war was the bombing of his home and the loss of his early healing records. He designated the front room of his new home as a healing room, and his healing work picked up and grew as the war came to a close. By 1946 it was obvious that his healing was taking precedence over his printing. He turned the business over to his brother and moved again, this time to Burrows Lea, where he had room to open what became known as the Healing Sanctuary.

The number of letters asking for healing grew to the thousands per week, and his public programs on healing were well attended. In 1953 he was included in an investigation by the leadership of the Church of England on “Divine Healing,” which voiced its concern with healings that occurred outside of the services provided by physicians or priests. In spite of being basically ignored by the establishment, the work at the Sanctuary continued to expand.

In the 1960s Edwards wrote a number of books, including an autobiography. By this time, Edwards had become a major asset to the British Spiritualists movement, and he became an apologist for the cause. His book Spirit Healing especially emphasized the role of the spirits of the deceased in the healing process.

Edwards was born Henry James Edwards and became the best known healer in Britain, if not the world. He began healing in 1935 and claimed to have cured more than 10,000 people; many of them previously pronounced “incurable.” His mail totaled tens of thousands of letters a year; sometimes as many as 5,000 letters in one week. He practiced both direct healing and absent healing, with a success rate of between 85 percent and 90 percent.

During World War I, Edwards was working in the Middle East building a railroad. In the course of the work many of the laborers injured themselves and went to Edwards for healing. They referred to him as hakim, “healer.” Edwards himself didn’t think he was doing anything unusual, attributing their fast recovery to them rather than to himself. On returning to England, after the war, he didn’t pursue his healing abilities.

Edwards attended a Spiritualist church service in 1922 and was very impressed with it. However, it was not until 1935 that he went with a friend to a small Spiritualist service held in a house close to where he lived. He received a number of messages from the mediums telling him that he had a tremendous healing potential. At the time he ran a small printing and stationery business. He started going to two different development circles and received encouragement regarding the healing gift. His first attempt at a healing involved a man in Brompton Hospital, who had been dying from consumption and pleurisy, but recovered fully and returned to work.

Shortly after this first incident, a woman went into Edwards’s shop without really knowing what had impelled her to enter it. She told him that her husband had been in a London hospital, suffering from advanced lung cancer. The doctors had given up and sent him home to die. Edwards told the woman he would seek spirit healing for the man. He did so and the very next morning that man was up and making a cup of tea for his wife. When the man next went to the hospital a new doctor refused to believe that the records in front of him applied to the man he was examining, who was obviously doing well. Soon the man was back at work and, to Edwards’s knowledge, lived at least another twenty years. Such cures continued. His next patient had tuberculosis and a cavity in her lung, and healed completely after Edwards did a healing. Edwards said, “Later she became a nurse in the same sanatorium where she had been a patient less than a year before. This girl never suffered again. She married, has a family and is fully well today.”

Edwards said, “The healer does not heal of himself or by reason of any technique or ritual that he may adopt. The healing directive comes from Spirit.” He thought of himself not as the healer but as the channel for healing energy. As Edwards went on to explain, “These three cases proved to me that there was ’something’ in healing. Coincidence was ruled out.” (Spirit Healing, 1960). Before long he opened his house in Shere, Surrey, as a healing sanctuary where the sick came in everincreasing numbers. The Harry Edwards’ Spiritual Healing Sanctuary is still in operation today. At Edwards’s death in 1976, Joan and Ray Branch, who had worked with Edwards for many years, took over the running of it. Like Cayce, Edwards found that he was able to heal just as successfully absently, when the patient was hundreds or even thousands of miles away. He had many spectacular successes, including several cancer cures.

Edwards publicly demonstrated his gift of healing in every major city and town in Great Britain and in many countries abroad, performing what the press often termed “miracles of healing.” His clients included members of the British royal family, and other royal families, cabinet ministers and politicians, movie stars, sports personalities, and religious leaders. Many doctors and specialists were frequent observers at his healings and would bring their own patients for healing. He had a great respect for the Native Americans’ knowledge of herbs and healing and for other similar cultures. He believed that it was Native Americans who worked through him. Edwards also later came to recognize that he was working with spirit guides that included Louis Pasteur and Lord Lister, the nineteenth century English surgeon.

Feedback
Flashcards & Bookmarks ?
Please log in or register to use Flashcards and Bookmarks. You can also log in with
Flashcards ?
My bookmarks ?
+ Add current page to bookmarks
Mentioned in ?
References in periodicals archive ?
SANDY Edwards, Harry Fairbairn, BMW Franchise Manager, said: "The X4 is the latest mini SUV on the market.
Get theXfactor
Other batsmen to hit form for Mirfield were Tom Edwards, Harry Chamberlain and Harry Pickles.
RAMSAY STRIKES IN SUPERB STYLE; Four wickets in as many deliveries for Mirfield star
Powerful running from Nathan ScarlettS Brooke, Jason Lancaster, Matheson, Edwards, Harry Peters and Eddie McGuire saw Panthers camped in the opposition 20, but they could not turn pressure into points.
Panthers put up good show after lay-off; Junior Rugby League
Great defensive displays up the middle from Ryan Edwards, Harry Peters, Jason Lancaster, Carr and McGuire showed that Harehills should be passing out wide, which they did to good effect, finishing the half 18- 4 up.
Panthers hit by Drig blitz
Other tries came from Timmy Taylor (2), Callum Parkinson, Joe Clayton and Ashley Jones, while Ryan Edwards, Harry Peters and James Chappell were among the goalscorers.
New National joy for the Panthers
Good performances came from Jack Brick, Joe Clayton, Callum Parkinson, Tim Taylor, Ryan Edwards, Harry Peters, Edward McGuire, Jordan Ramsden and Jamie Chappell.
Newsome Panthers impress in Co-op competition