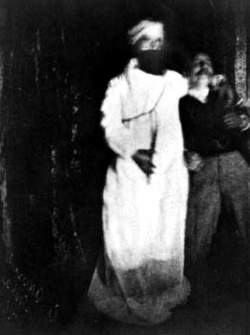 Born in Islington, London, on July 10, 1857, William Eglinton first heard of Spiritualism at the age of seventeen when he attended a debate at the London Hall of Science with his father. The debate between Dr. Sexton and Mr. Foote was lively enough to inspire Eglinton’s father to go home and start a development circle. Eglinton was part of the circle but quickly became disillusioned when nothing seemed to happen. He fixed a sign on the door of the circle room saying “There are lunatics confined here; they will shortly be let loose. Highly dangerous.” His father was not amused and told him to either join the circle or leave the house while the séance was in progress. Eglinton chose to stay, though was determined to undermine any eventual phenomena.

Instead, Eglinton went into a trance and caused the table to move. Later he said, “Something did happen, but I was powerless to prevent it. The table began to show signs of life and vigour; it suddenly rose off the ground and steadily raised itself in the air, until we had to stand to reach it. This was in full gaslight … The next evening … after we had read the customary prayer, I seemed to be no longer of this earth. A most ecstatic feeling came over me, and I presently passed into a trance.” He produced materializations, through his guides Joey Sandy and Ernest. These materializations appeared in full moonlight. News of his successes spread and he was soon so inundated with requests for séances that he gave up his job with a printing firm and became a full time medium. Eventually his mediumship developed to rival even that of Daniel Dunglas Home. Sir Arthur Conan Doyle said, “His work resembles that of D. D. Home. His séances were usually held in the light, and he always agreed willingly to any proposed tests. A further point of similarity was the fact that his results were observed and recorded by many eminent men and by good critical witnesses.”

For twelve years Eglinton was subjected to the severest examination by such people and bodies as the Brixton Psychological Society, British National Association of Spiritualists, Archdeacon Colley, Scientific Research Committee of the BSA, Society for Psychical Research, Upsala University, Alfred Russel Wallace, Professors Charles Richet, Tornebom, Edland, Zöllner, Dr. Myers (brother of Frederick W. H. Myers), and many others. The well known stage magician Harry Kellar said of Eglinton, “I went as a sceptic, but I must own that I came away utterly unable to explain, by any natural means, the phenomena that I witnessed.”

Staying at Malvern as the guest of Dr. and Mrs. Nichols, Eglinton displayed incredible materialization in the open air; out in the Nichols’s garden. In The Scientific Basis of Spiritualism (Boston, 1882) Epes Sargent wrote, “Mr. Eglinton lay on a garden bench in plain sight. We saw the bodies of four visitors form themselves from a cloud of white vapour and then walk about, robed all in purest white, upon the lawns where no deception was possible.” Eglinton was constantly in sight and there was no possibility of an accomplice scaling a wall without being seen.

In the June 2, 1876, issue of The Spiritualist, Archdeacon Colley described how Eglinton was “entranced and carried by invisible power over the table several times, the heels of his boots being made to touch the head of our medical friend [Dr. Malcolm]. Then he was taken to the further end of the dining room, and finally, after being tilted about as a thing of no weight whatever, was deposited quietly in his chair.” On March 16, 1878, Eglinton held a séance at the home of Mrs. Makdougal Gregory and at it transported himself from the room into another room on the floor above. The account of the séance was published in the March 22, 1878 issue of The Spiritualist. Eglinton traveled to various parts of the world, including South Africa, India, Denmark, Germany, France, and Russia.

On October 29, 1884, Eglinton held a séance for the British Prime Minister William Ewart Gladstone, described as “the greatest British statesman of the nineteenth century.” (Encyclopedia Britannica) Gladstone did not profess to be a Spiritualist, although after this séance he did become a member of the Society for Psychical Research. Gladstone said, “I have always thought that scientific men run too much in a groove. They do noble work in their own special lines of research, but they are too often indisposed to give any attention to matters which seem to conflict with their established modes of thought. Indeed, they not infrequently attempt to deny that into which they have never inquired, not sufficiently realizing the fact that there may possibly be forces in nature of which they known nothing.”