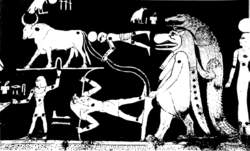 A fresco of the northern constellations discovered in the lower burial chamber of Seti I. Reproduced by permission of Fortean Picture Library.

The ancient Greeks viewed Egypt as an exotic, mysterious land, somewhat as contemporary Westerners regard India. Thus, anything Egyptian carried with it an aura of prestige that artifacts or ideas from other areas of the world did not enjoy. For this reason, Greeks such as Herodotus tended to associate astrology with Egypt, although Egyptian astrology had been adopted wholesale directly from Mesopotamian astrology, and the Egyptians had added little to the science of the stars. It was only later, after Hellenistic culture had been imposed upon the land of the Nile, that Egyptians contributed to astrology.