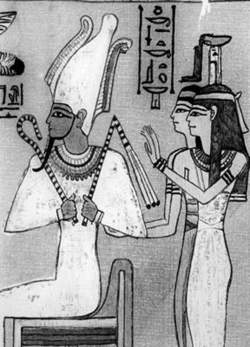 Egyptian goddesses Isis and Nepthys, attendants of Osiris, King of the Dead, from the Egyptian Book of the Dead. Fortean Picture Library.

For many generations, Heliopolis was the religious capital of Egypt. It was the city sacred to Ra, the Sun God. As the religion of Egypt grew, Ra developed a family—a sort of protective dynasty. The nine members of his family became the principal deities of the Egyptian pantheon called the Great Ennead of Heliopolis. Their names were Ra, Geb, Nut, Shu, Tefnut, Osiris, Isis, Set, and Nephythys.

The name "Ra" became an international household word after the "Ra Voyages" of the intrepid Norwegian adventurer and anthropologist Thor Heyerdahl in 1969 and 1970. Believing the history of Central America was influenced by ancient Egyptian sailors, Heyerdahl built a faithful replica of the kind of reed boats Egyptians had made. He then set out to prove pre-Columbian contact was at least possible. On his second try, sailing from Morocco to Barbados, he made it. The name painted on the sail of his boat was "Ra."

Ra was both creator and father to one of the most famous dysfunctional families in history. His family, as will soon be seen, were not only brothers and sisters, many of them were also husband and wife. They freely loved each other, murdered each other, and performed all kinds of mayhem. It is no wonder he decided to leave Earth and retire to become god of the sun and sky, leaving his grandson Osiris to rule the world.

Nut and Geb were sister and brother as well as wife and husband. Their children were named Osiris, Isis, Set, and Nephthys. Nut was the goddess of the sky and the heavens. She is usually pictured with blue skin, covered with stars. Her husband, Geb, was god of the earth. His sacred animal was the goose.

But one day their brother, Shu, god of the atmosphere, caught them in a passionate embrace. He wasn't necessarily upset about the embrace. This was, after all, ancient Egypt, when gods did stuff like that. His problem was that they hadn't told him first. So he separated them. This perhaps explains how heaven and earth came to be separated by atmosphere.

Although the two brothers and one sister got into enough squabbles, it was their children who really carried the family quarrels to an extreme.

One of the most important and well-known stories in Egyptian mythology explores the complicated relationship between these gods and goddesses.

Osiris ruled the world after Ra, his grandfather, left to take his new job ruling the sky. Osiris was married to his sister Isis, the most important goddess of the Egyptian pantheon. She was the goddess of motherhood, marital devotion, and healing. This last she was especially good at because she had coaxed her grandfather, Ra, into telling her his secret name, enabling her to perform all kinds of spells of enchantment.

Osiris and Isis had another brother named Set. He showed up at a party of gods once, carrying a coffin. As part of the entertainment, all the gods climbed into the coffin to see who it best fit. Unknown to Osiris, however, Set had the coffin made exactly to Osiris's measurements. It turns out he was jealous because Osiris had Ra's old job instead of him. Of course, when Osiris got into the coffin, it fit him like a glove. All Set had to do was close it up, seal it with lead, and kill Osiris by spiriting him off down the Nile River, into the Mediterranean Sea, and all the way to Phoenicia. Osiris, although dead by then, eventually found protection when a great, aromatic tree spread its roots about the coffin and enclosed him in its trunk. The problem came when the tree got cut down to form a pillar in the new palace of Astarte, daughter of Ra, in Phoenicia.

Isis was devastated. But eventually she found out about the great, sweetsmelling pillar in Astarte's new palace and immediately knew Osiris was inside. (Goddesses know these things.) Hieing herself off to Phoenicia, she got a job nursing Astarte's new baby.

She took such a shine to the young baby that she decided to burn off any mortality he might have so he could be immortal. While the fire slowly burned, she took on her favorite guise of a bird and, to pass the time while her magic was doing its work, flew around the room paying special attention to Osiris's coffin entombed in the pillar.

As you can well imagine, the child's mother wasn't too happy to discover what was going on when she burst into the room one afternoon, only to find her child in the fireplace while a bird flapped around the pillar.

But all's well that ends well. Isis persuaded Astarte that the pillar contained her husband, and she managed to get permission to put him on her barge and transport him back to Egypt. Of course she embalmed him first to prepare him for his death journey home. So imagine her surprise when she finally opened the casket, presumably to have sex with her dead husband, only to discover that somewhere back in the Nile River a crab had eaten his genitals! After a fascinating series of events, however, she finally managed to have sex with him and conceive a son, Horus.

At any rate, Osiris was brought back up the Nile in Isis's barge and, because he was the first living being ever to die, he soon landed a job as lord of the dead. Because he had been prepared for his final journey by being embalmed, he showed the ancients how to prepare for their own journeys after death.

Meanwhile Horus grew up and declared vengeance on his uncle Set—who once, somehow, a very long time ago, used to be his twin brother—for killing his father, Osiris.

At any rate, he eventually caught up with Set and castrated him before defeating him in battle. Some versions of the story have the battle still continuing—the battle between good and evil.

Horus went on to be reincarnated in every pharaoh. They were all seen as divine, sons of the gods. Horus was their prototype.

Nephthys was the youngest child of Nut and Geb. Although she was both sister and wife to Set, she left him when she discovered what he had done to her brother, and she was there to console her sister Isis upon the death of Osiris, who was both her brother and brother-in-law, being her sister's husband.

These gods and goddesses have served an important purpose in history. Almost certainly they represent the struggle between religious cults in prehistoric, ancient times. The cult of Set probably did go to war and eventually defeat their "brother" cult of Osiris. The cult of Isis probably did side with that of Osiris, and the sister cult of Nephthys probably did break allegiance with the Set cult to side with that of Isis. All these people were once "brothers and sisters," who once worshiped Ra, the Sun God, now remembered in ancient stories and myths. And if a "brother" from one cult married a "sister" from another cult, they could become the mother and father of a third cult. So it's really not as complicated as it at first seems to be.

By reading the myths in this way, we may be reading the real religious history of ancient Egypt. These myths may be the closest thing we have to a window on the past.

Feedback
Flashcards & Bookmarks ?
Please log in or register to use Flashcards and Bookmarks. You can also log in with
Flashcards ?
My bookmarks ?
+ Add current page to bookmarks
References in periodicals archive ?
Egyptian gods and goddesses. New York, NY: Penguin Young Readers.
Researching the Historical Representations of Ancient Egypt in Trade Books
Entrance of a tomb inside Gebel al-Mawta in Siwa, February 13, 2001 -- Wikimeda/ Roland Unger Fourth, the Crocodile tomb represents yellow crocodiles of the god Sobek and has walls and ceilings painted in red, ochre and cobalt blue of the ancient Egyptian gods and goddesses. From the top of Gebel al-Mawta, you can take a panorama view over the whole oasis.
Be brave and enter Gebel al-Mawta in Siwa
Children from Our Lady's Catholic Primary School, Prescot, take part in a workshop about ancient Egyptian gods and goddesses as part of a National Museums Liverpool and Hope Street theatre scheme to let young people find out more about ancient history and museum collections
Around the Classes
Encyclopedia browser ?
Full browser ?
CITE
Site: Follow: Share:
Open / Close