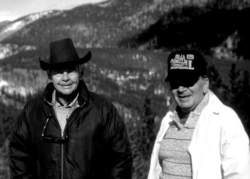 Jule Eisenbud (left) published his study on the abilities of Ted Serios (right), who claimed to generate photos on film using only his mind. Courtesy Fortean Picture Library.

Born in 1908, Jule Eisenbud became a physician, psychiatrist, parapsychologist, and founding member of the Medical Section of the American Society for Psychical Research. Eisenbud authored many articles on psychiatry and psychoanalysis and also contributed articles on parapsychology to such journals as Journal of Parapsychology, Psychoanalytic Quarterly, Journal of the ASPR, and Journal of the SPR (London). Eisenbud practiced psychiatry beginning in 1938, and in 1950 moved his practice to Denver, where he was a clinical professor at the University of Colorado Medical School.

Eisenbud experimented with extrasensory perception, telepathy, and the psi faculty. In 1963, he published an article arguing that it is impossible, in the field of parapsychology, to devise an experiment that is truly repeatable. His best known book was The World of Ted Serios: Thoughtographic Studies of an Extraordinary Mind (1967). This was based on his experiments with an alcoholic bellhop from Chicago, who could produce photographs using his mind alone. By concentrating his thoughts, Serios could look into the lens of a Polaroid camera and cause the ensuing photograph to be of what he was thinking. Eisenbud tested and examined Serios for some years and found no trickery or fraudulence of any kind. Two reporters, Charles Reynolds and David Eisendrath, claimed that Serios was a fake but they had never had the chance to examine the “gismo” Serios used (a small paper tube he pointed at the camera to aid his concentration), as had Eisenbud.