Eisenhower and the Extraterrestrials 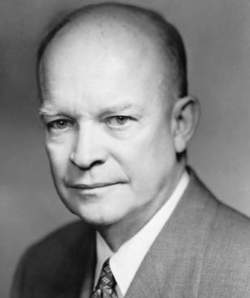 President Dwight Eisenhower is said to have been well familiar with the presence of alien vehicles and the Etherians on our planet.

Eisenhower and the Extraterrestrials

In 1954 President Dwight D. Eisenhower inspected a variety of alien space vehicles on a U.S. Air Force base.

The story of President Eisenhower and the “Etherians,” an extraterrestrial species, finds its origin in a letter from Gerald Light, Los Angeles, California, to Meade Layne, San Diego, the director of Borderline Sciences Research Associates, dated April 16, 1954. Light writes that he had just returned from Muroc (Muroc Dry Lake, located at Edwards Air Force Base, California) and that he made the trip in the company of Franklin Allen of the Hearst newspapers, Edwin Nourse (President Truman’s financial adviser) of the Brookings Institution, and Bishop McIntyre of Los Angeles. Light asks that these names be kept confidential.

Then Light discloses the shocking sight that met those assembled at Edwards Air Force Base when “Etherians” appeared with their alien craft:

When we were allowed to enter the restricted section. I had the distinct feeling that the world had come to an end. For I have never seen so many human beings in a state of complete collapse and confusion, as they realized that their own world had indeed ended with such finality as to beggar description. The reality of otherplane aeroforms is now and forever removed from the realms of speculation and made a rather painful part of the consciousness of every responsible scientific and political group.

During my two days’ visit, I saw five separate and distinct types of aircraft being studied and handled by our Air Force officials—with the assistance and permission of the Etherians! I have no words to express my reactions. It has finally happened. It is now a matter of history.

I will leave it to your own excellent powers of deduction to construct a fitting picture of the mental and emotional pandemonium that is now shattering the consciousness of hundreds of our scientific authorities and all the pundits of the various specialized knowledge that make up our current physics. In some instances I could not stifle a wave of pity as I watched the pathetic bewilderment of brilliant brains struggling to make some sort of rational explanation which would enable them to retain their familiar theories and concepts. I shall never forget those forty-eight hours at Muroc!

Light believed that President Eisenhower would soon go directly to the people via radio and television and make an official statement that the aliens had landed. That official announcement of aliens among the human population was never made. Conspiracy theorists assert that either the president reconsidered informing the American public or Majestic-12 and other secret government agencies persuaded him to keep the nation in the dark concerning the aliens.

In the 1990s the Earl of Clancarty, a member of Great Britain’s House of Lords, repeated the testimony of a British pilot who had been vacationing in Palm Springs in February 1954 and was summoned to Edwards Air Force Base by military officials. According to the pilot—a man Lord Clancarty respected as a gentleman of the greatest integrity—the aliens disembarked from their space vehicles and approached Eisenhower and a small group of political and military figures.

The ETs seemed able to breathe the air of Earth without the need of a helmet or other apparatus, and the pilot described them as basically humanlike in appearance, about the same height and build as an average man. However, their features were, in his opinion, somewhat misshapen. The aliens spoke English, and the thrust of their dialogue centered on their wish to begin a program of education that would make all of humanity aware of their presence. The British pilot recalled that Eisenhower was not in favor of this plan. In a very forthright manner he told the aliens that he didn’t believe the people of the world were ready for the sudden revelation that extraterrestrials were on the planet. Such an announcement, in Eisenhower’s assessment, would only cause widespread panic.

The aliens appeared to understand the president’s point of view, and they agreed not to institute their proposed program of widespread education about their presence. Instead, they informed Eisenhower, they would continue to contact isolated humans until more people got used to their being here. The president agreed with a program of limited contact, but he urged the aliens not to do anything that would create panic and confusion among the people of Earth.

The ETs next demonstrated a number of their incredible technical advances. (Eisenhower reportedly was very uncomfortable when they displayed their ability to become invisible.) The aliens then boarded their craft and left the air base. Those who had witnessed the historic meeting were sworn to maintain complete secrecy.

Lord Clancarty clarified that although the pilot had kept his vow and had not previously disclosed word of the remarkable events at Edwards Air Force Base, he believed that all the principals who were present in 1954 were now deceased.

In 1993 Dr. Hank Krastman of Encino, California, revealed in Unexplained magazine that he had been present that day in 1954 at Edwards Air Force Base as a young sailor in the Royal Dutch Navy. Krastman was trained for internal services dealing with matters concerning the NATO pact and CIA affairs, and at nineteen years of age he was serving as an adjutant to his ship’s commander. Krastman remembered that on February 19, 1954, they were briefed about a top-security meeting that would take place the following day. The next morning they left Long Beach Navy Base in a van with a military police escort, and they arrived at Edwards Air Force Base at 10 A.M.

Escorted to a hangar at the far west side of the base, Krastman recognized President Eisenhower and, among others, the great physicist Albert Einstein, the German scientists Wernher von Braun and Victor Schauberger, and the American billionaire and aviation innovator Howard Hughes. Krastman wondered what the “two Nazi war criminals” von Braun and Schauberger were doing there. To the young Dutch sailor, von Braun, with his wartime work on the German V-1 and V-2 rockets, and Schauberger, who was involved in Hitler’s secret V-7 flying discs, were enemy scientists who had been responsible for the deaths of many of his countrymen.

Krastman heard his commander being told that there were five alien ships in another hangar and that some of the ETs would demonstrate the capabilities of the craft. Krastman was not allowed to enter the hangar that contained the aliens and their spaceships. When his commander returned, he was very pale and would not give any information regarding what he had seen.

The next day, Krastman said, various large crates were loaded onto their ship for the return voyage to Holland. He later found out that the crates were destined for a secret underground NATO base—a converted coal mine of great depth—in Limburg, Holland.

In 1959 Krastman returned to the United States as an immigrant, and he has continued to dig into the true meaning of his peculiar experience in February 1954.

Some researchers continue to believe that Eisenhower never called the press conference that Gerald Light had been so certain would take place because the truth about flying saucers would have created “a state of complete collapse and confusion” a “mental and emotional pandemonium,” and “pathetic bewilderment.”