[i′lek·trə]
(astronomy)
An asteroid with a diameter of about 113 miles (182 kilometers), mean distance from the sun of 3.117 astronomical units, and C-type surface composition.
McGraw-Hill Dictionary of Scientific & Technical Terms, 6E, Copyright © 2003 by The McGraw-Hill Companies, Inc. 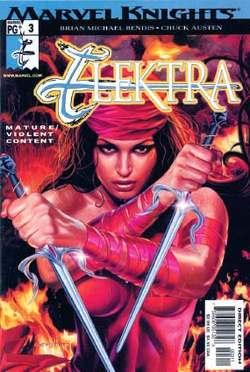 In his initial encounter with Elektra in Daredevil #168 (January 1981), Marvel Comics’ sightless Man without Fear receives from her the blunt end of a dagger to the back of his head, then a merciless kick across his jaw, proving that issue’s cover copy to be no hyperbole: “Once he loved her … now she is his most deadly enemy!”

“Elektra came into existence simply because I wanted Daredevil to have a femme fatale,” comments writer/penciler Frank Miller in Les Daniels’ historical volume Marvel: Five Fabulous Decades of the World’s Greatest Comics (1991). Yet “simply” never applies to Miller’s complex work. Elektra Natchios, once the college love of law student Matt Murdock, Daredevil’s alter ego, retreats from her boyfriend and society after her father, a Greek envoy, is assassinated. Emotionally poisoned by her father’s murder, she embarks upon a Zen-like quest to find purpose in her life, receiving martial-arts training first from a teacher in Japan, and then in a mysterious Arctic retreat, from Stick, the sensei who similarly instructed Murdock. Too indignant to become a noble warrior, Elektra allies herself with the Hand, a cult of ninjas that manipulates her into executing her original teacher in a deadly rite of passage. Her life now has direction: Armed with a pair of three-pronged blades called sai, the crimson-clad Elektra becomes an executioner for hire. Single-handedly plowing through throngs of gangsters, assassins, and ninjas alike, Elektra ricochets her sai off of walls with staggering accuracy while spinning, ducking, punching, and kicking, leaving no foe standing.

At the time of her debut in late 1980, Elektra defied the stereotype of the classic superheroine, that prim, altruistic mighty maid of previous decades who had slipped into cliché. Elektra was a female character unlike anything comic-book readers had seen before: Determined, self-assured, and vicious, she chose not to veil her identity behind a mask or alter ego— she was Elektra, the assassin—nothing more, nothing less. Although she was a killer, Elektra was a symbol of empowerment: Women no longer have to be victims, her actions spoke. Miller may have been “simply” creating a femme fatale with Elektra, but in the process he redefined the superheroine for the 1980s and beyond. And unlike the female love interests that had previously been introduced in comics, Elektra emerged not as a disposable character, but as an equal to her lover.

Elektra’s saga continued throughout intermittent issues of Miller’s Daredevil run (as well as in a 1981 solo story by Miller in Marvel’s black-and-white anthology magazine, Bizarre Adventures). The assassin had a heart, readers discovered, as she still loved Murdock, the blind man behind the devil mask, affording her character emotional complexity beyond her brutality. Yet that bond was overpowered by their wills: Elektra was committed to serve as the executioner for Daredevil’s foe the Kingpin, while the heroic Daredevil was pledged to stop her. In Daredevil #181 (1982), Elektra was stopped—by another assassin, Bulls-eye, who skewered her to regain his position in Kingpin’s corner. Mortally wounded, Elektra crawled to Murdock’s home and died in her lover’s arms. Unable to accept the passing of such a forceful spirit, Murdock exhumed her in the very next issue for firsthand proof that Elektra was indeed dead. A mere five months later, a story written and penciled by Miller—“What if Bullseye Had Not Killed Elektra?”—was published in What If? #35, but it merely teased readers with make-believe.

Elektra lived again, however. Miller resurrected her in Daredevil #190 (1983), by metaphysically cleansing her soul. The character resurfaced, first in The Elektra Saga (1984), a four-issue repackaging (with new material added) of her Daredevil appearances, then months later in what would be creator Miller’s banner year.

That year was 1986. Miller returned to Daredevil, but only as writer for a brief, critically acclaimed stint, and produced his magnum opus Batman: The Dark Knight Returns for DC Comics. Elektra: Assassin, launched in August 1986, reunited author Miller with his popular creation in an eight-issue postmodern prequel to her Daredevil appearances. Lavishly painted by Bill Sienkiewicz, Elektra: Assassin pitted Elektra against a pigheaded federal agent and a demon bent on starting a nuclear war. Sienkiewicz’s experimental art style and Miller’s scathing political commentary made Elektra: Assassin a controversial milestone for Marvel Comics.

By the 1990s, more superheroines had followed Elektra’s edgy lead—Avengelyne and Shi, for example—dulling some of the assassin’s uniqueness. Yet Marvel consistently maintained a presence for the character. A four-issue Elektra miniseries was published in 1995, followed by more reprints of the original Miller material and a crossover with Image Comics’ Cyblade in early 1997. In July of that year, Marvel released Elektra #1, an ongoing monthly comic. Daredevil guest-starred in the first issue and Bullseye surfaced shortly thereafter. Without Miller’s participation, however, and with the embittered Elektra being out of place in the mainstream Marvel universe, the series died after nineteen issues.

In the 2000s, editorial changes at Marvel Comics helped Elektra regain her stature. Some of the publisher’s grittier characters have been allowed to explore explicit themes in the company’s Marvel Knights and MAX imprints. After co-starring with the immensely popular X-Man Wolverine in the three-issue Elektra & Wolverine: The Redeemer (2001), Elektra was back on the stands in September of that year in a new and appropriately violent series. In her solo adventures, Elektra’s marks are clearly criminals; however, despite their wrongdoings she brutally assassinates them, making her a villain (or, at best, an anti-heroine) in the eyes of the authorities in the comics, and also from the perspective of some readers.

Elektra’s profile received another boost with the release of the live-action movie Daredevil (2003), starring Ben Affleck in the lead. Daredevil appropriated much of Miller’s material from his first run on the comic book, including the hero’s relationship with Elektra, portrayed by actress Jennifer Garner. Garner’s interpretation of the character captivated viewers, including young girls, elevating Elektra from cult-comic status to mass-media acclaim. At the time of the release of Daredevil, Garner commented, “I wish that I had read Elektra when I was growing up because I think that she’s very empowering to young women. I can’t pass up the comics now; I have to stop and see if there’s a new Elektra out.” Garner went on to star in the 2005 Elektra film directed by Rob Bowman for Twentieth Century Fox. —ME