[i¦lek·trik ′mēd·ər]
(engineering)
An electricity-measuring device that totalizes with time, such as a watthour meter or ampere-hour meter, in contrast to an electric instrument.
McGraw-Hill Dictionary of Scientific & Technical Terms, 6E, Copyright © 2003 by The McGraw-Hill Companies, Inc.
The following article is from The Great Soviet Encyclopedia (1979). It might be outdated or ideologically biased.

(or electricity meter), an electrical measuring instrument that totalizes the electric energy fed into a network by a generating station or consumed by users over a given time period. The type of measurement performed by electric meters places them among the integrating measuring instruments. Meters for DC circuits use permanent-magnet, moving-iron, electrolytic, or electrodynamometer systems. Induction mechanisms, which record the consumption of both active and reactive power, are the most common system for AC circuits. Meters of all types except electrolytic are miniature electric motors; therefore, they are often called motor-type meters.

The principal difference between electric meters and pointer or luminous indicating instruments is that the moving part in a meter is not restrained by a spring and therefore can rotate freely, with each revolution corresponding to a predetermined value of the quantity being measured.

The design of an induction electric meter for single-phase alternating current is shown in Figure 1. The current and voltage circuits of the meter are connected in series and in parallel, respectively, with the circuit being monitored. Current flowing through the circuits induces alternating magnetic fluxes Фu and ФI in the electromagnets. A torque proportional to the power P arises as a result of the interaction of the flux Фu and the eddy currents induced in the disk by the flux ФI. The number of revolutions of the moving element during the time interval t is proportional to the energy

. The result of the measurement, usually expressed in kilowatt-hours, is displayed on a counter connected to the axis of the disk by a worm drive. 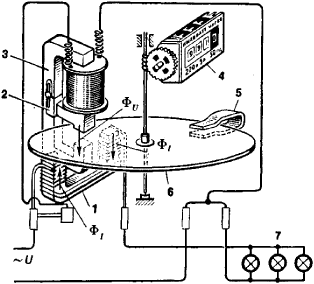 Feedback
Flashcards & Bookmarks ?
Please log in or register to use Flashcards and Bookmarks. You can also log in with
Flashcards ?
My bookmarks ?
+ Add current page to bookmarks
Mentioned in ?
References in periodicals archive ?
These are an extension of prepaid electric meters - which was first launched on a pilot basis in 2010 in 500 houses - to all customers as an option on a commercial basis, as well as studies to find out the viability of automated machine reading (AMR) and replacement of a large number of analog machines with digital meters.
All customers to get prepaid meter option
However, in this case, Wisconsin Public Service, wanted a product to interface with a third-party vendor they were using for electric meter AMR applications.
Open-protocol gas encoder index enables flexible AMR for gas meters. (Tech Notes)
I asked the school janitor where the electric meter for the school was, so I could take my class down and show this meter's dials to them.
The Digital Age. (in the Light Lane)
In the meeting the issue of Installation of ZERO-RATED Electric Meter at any Rental Place were also discussed on which Federal Minister for Finance Mr.
PWMA delegation meets Finance Minister
The team removed electric meter and got registered a case against owner Mohammad Younas under electricity act 462-J.
Power pilferage detected in powerloom factory
Digi X-Grid is an "Extended Grid" that enables real-time, IP-based monitoring and control of home energy devices beyond the electric meter, allowing Siemens to add a web-based energy consumption and management platform for consumers.
Digi technology gives Siemens AMIS users real-time utility usage information
Japanese Fuji Electric (TYO:6504) said on Wednesday it had decided together with its US partner General Electric (NYSE:GE) to postpone setting up their agreed electric meter joint venture until after it receives a remaining regulatory approval.
Fuji Electric, GE delay closing of electric meter JV deal
In 2009, the Commission has established that one citizen's electric meter with a mechanism for an automatic protection has repeatedly interrupted the power for 1 hour after the appliance registers load over the threshold.
Bulgarian Court Fines Austrian Utility EVN
As a third step, cancel your electric meter quarterly bill and go for a pre-payment electric meter where you will be able to purchase your electricity cards at the post office on a weekly basis.
Use it or lose it
However, in this case, Wisconsin Public Service wanted a product to interface with a third party vendor they were using for electric meter AMR applications.
New measurement system improves ability to read meters. (Product Development)
Here is a piece of news you will find amusing: The Bases Conversion and Development Authority (BCDA) under Arnel Casanova was caught using illegal jumper cables on its electric meter at a log cabin in the Voice of America section of Camp John Hay in Baguio.
BCDA harassment of developer continues
Electrical savings: A not-for-profit tenant or owner with a direct electric meter can save the 8.55 percent sales tax cost.
Buy or lease is big question