a document-reproduction process that is based on the heat produced by a spark discharge.

Used primarily in small-job printing to make mimeograph stencils or, less often, offset printing plates, electric-discharge duplication is performed with an electric-discharge duplicator (Figure 1). A black-and-white or color paper original that is typewritten, typeset, or prepared in pencil or india ink is clamped to a rotary unit consisting of a metal cylinder. Also clamped to the unit is a sheet of plasticized, electrically conductive stock, which will become the stencil or plate. 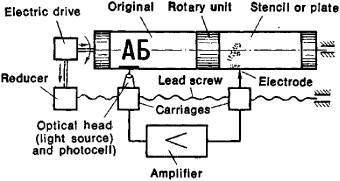 As the rotary unit turns, the original passes under an optical head that contains a light source and a photocell and that moves along the cylinder at a uniform rate. A light beam from the source is reflected from the surface of the original—the intensity of the luminous flux varying according to the reflectance of the portion over which the optical head passes—and falls on the photocell. In the photocell the luminous flux is converted into an electric signal, which, after being amplified, is fed to a needlelike electrode that is moving in synchronism with the optical head. A spark discharge occurs between the electrode and the surface of the rotary unit, burning holes through the stock in places corresponding to the dark portions of the original. The time required to produce the stencil or plate is 5–10 min. The resolution of electric-discharge duplicators ranges from 60 lines per millimeter to 240 lines per millimeter.