a device that automatically maintains a constant voltage at the inputs of any receiver of electric power (voltage stabilizer) or a constant current in the circuits of such receivers (current regulator). Constant values are maintained regardless of variations in the mains voltage or load.

Voltage stabilization can be achieved with ferromagnetic stabilizers. This group, which includes ferroresonant stabilizers, is based on the magnetic saturation of the ferromagnetic cores of transformers and reactors. Electronic stabilizers, which constitute a second group, employ semiconductor devices and, less frequently, electron tubes and effect stabilization by regulating the deviations from a set value. Single-phase and three-phase stabilizers for alternating voltage, predominantly of the ferromagnetic type, are produced in the USSR. These devices have power ratings from tens of volt-amperes (VA) to hundreds of kilovoltamperes (kVA). Stabilizers for direct voltage, predominantly semiconductor devices, are also produced, with power ratings from several watts (W) to several tens of kilowatts (kW).

Stabilization of current, which is usually understood to mean direct current, is achieved with the aid of either electron devices having a strongly pronounced nonlinearity of volt-ampere characteristics (barretters, vacuum diodes), or electron-tube amplifiers with negative feedback with respect to current. For constant loads, the current in the amplifier can also be held constant with a voltage stabilizer. 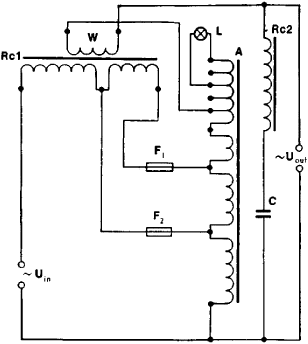 Ferroresonant stabilizers are widely used for stabilizing the alternating voltage, usually at commercial frequencies, supplying control and measuring instruments, regulating elements and actuators in electrical automation systems, and household appliances and radio apparatus (power ratings from tens of VA to several kVA). A voltage stabilizer for television sets and radio receivers is shown in Figure 1. Here, the mains voltage is 127/220 V, and the stabilizer incorporates a terminal block for switching the taps of the autotransformer when shifting from one mains voltage rating to another. Since reactor Rcl operates in a saturated mode, variations in the mains voltage have practically no effect on the reactor’s magnetic flux. An auxiliary winding W is used to compensate for small fluctuations. The unsaturated reactor Rc2 and the capacitor C form a ferroresonant circuit providing a stabilized output voltage. The internal resistance of the electrical stabilizer is considerably lower than the resistance of the rated load. With mains voltages of

and variations in frequency of 49.5–50.5 hertz, this type of stabilizer can provide an output voltage of

that is, it has a coefficient of stabilization of 3 percent.