a rod made of materials, especially metals, that are good conductors of electricity, which is mounted on top of a building or other structure and attached to the ground by a cable. By virtue of its position, shape, and conductivity the rod attracts lightninglightning,
electrical discharge accompanied by thunder, commonly occurring during a thunderstorm. The discharge may take place between one part of a cloud and another part (intracloud), between one cloud and another (intercloud), between a cloud and the earth, or earth and
..... Click the link for more information.  discharges much more readily than the building on which it is mounted. When struck, the connecting cable carries the discharge safely into the ground, preventing any damage to the building. Benjamin FranklinFranklin, Benjamin,
1706–90, American statesman, printer, scientist, and writer, b. Boston. The only American of the colonial period to earn a European reputation as a natural philosopher, he is best remembered in the United States as a patriot and diplomat.
..... Click the link for more information. , in his kite experiment (1752), proved that lightning and electricity are identical and subsequently invented the lightning rod.
The Columbia Electronic Encyclopedia™ Copyright © 2013, Columbia University Press. Licensed from Columbia University Press. All rights reserved. www.cc.columbia.edu/cu/cup/

[′līt·niŋ ‚räd]
(electricity)
A metallic rod set up on an exposed elevation of a structure and connected to a low-resistance ground to intercept lightning discharges and to provide a direct conducting path to ground for them.
McGraw-Hill Dictionary of Scientific & Technical Terms, 6E, Copyright © 2003 by The McGraw-Hill Companies, Inc. 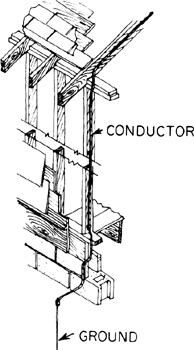 lightning conductor
A metallic cable or rod, running from the highest point on the roof of a building (and insulated from it) to the ground; protects the building, should lightning strike, by providing a direct path to ground.

A rod-like electrical conductor attached to the highest exterior point of a building; provides a direct electrical path to the ground if lightning strikes the building, furnishing protection against lightning-induced damage; invented in 1752 by Benjamin Franklin, who established that lightning is an electrical phenomenon.
McGraw-Hill Dictionary of Architecture and Construction. Copyright © 2003 by McGraw-Hill Companies, Inc.