a class of electronic devices designed for various kinds of conversion of information in the form of electric or light signals.

A distinguishing feature of electron-beam instruments is the use of a stream of electrons that are concentrated (focused) into a narrow pencil (an electron beam), which is controlled with respect to intensity and spatial position. In the simplest case (Figure 1) the beam is formed by an electron gun, and its intensity is controlled by varying the potential on a control electrode (modulator). The beam is deflected in two mutually perpendicular directions by electric or magnetic fields (which are situated transverse to the axis of the device and which are created by deflection plates or by magnetic coils outside the device) and is guided to one point or another on a two-dimensional target. The interaction of the pencil with the target converts signals according to the properties and structure of the target. 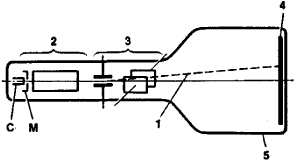 If the target of an electron-beam instrument is a luminescent screen made with phosphors that glow when bombarded by electrons, then the instrument will be capable of converting a time sequence of electric signals into a two-dimensional brightness distribution of the screen’s luminescence—that is, it will be capable of rendering the electric signals visible. This may be done in two ways. In the first method the electric signals to be converted are fed to the deflection plates or coils and control the position of the beam on the screen; as a result, a graphic representation of the signals is created on the screen. For example, if the horizontal deflection plates are supplied with a linearly varying voltage that deflects the beam in the horizontal direction at a constant velocity and if the varying electric signal to be studied is supplied to the vertical deflection plates, then an oscillogram of the signal will be traced on the screen in a rectangular coordinate system. Electron-beam instruments that function in this mode are known as oscillograph tubes. If the beam position is controlled simultaneously in two directions (horizontally and vertically) by specially formed signals, it is then possible to produce on the screen diagrams, numerals, letters, and other symbols that convey the appropriate information. Such instruments are used in data displays. One type of instrument for displaying symbols is the character display.

In the second method, the electron beam is moved over the surface of the screen according to some specified method. During the deflection process (scanning) the input signal is fed to a control electrode to vary the beam intensity and, consequently, the brightness of the luminescence at various points on the screen, thereby creating a halftone image that corresponds to the sequence of electric signals. This principle is used in such electron-beam instruments as the kinescope, which converts a television signal into an image, and the indicator tube, which is used to create a radar display image.

If the target used is a photosensitive layer that varies its electrical properties (such as electrical conductivity) under the influence of light, then the electron-beam instrument will be capable of performing the reverse conversion of a two-dimensional optical image into a sequence of electric signals. When an image is projected onto such a target for transmission, local changes occur in the potential of the surface layer. The changes cause a change in the current flowing through the layer as the target is swept by an electron beam of constant intensity according to the method adopted for television scanning. The time variations of the current constitute the television signal. Instruments designed for such a conversion are called television camera tubes.

In some electron-beam instruments, control of the beam intensity by the input signal changes some optical characteristic of the target so that as the beam is deflected local changes (modulation) occur in the luminous flux emanating from an intense external light source and uniformly illuminating the surface of the target (Figure 2). The modulated luminous flux creates an optical image, which is projected by a lens onto a large screen (seePROJECTION TELEVISION). Such instruments are classified as light valves. They use various phenomena to modulate the light by means of the action of electrons on a substance: changes effected in the color of certain crystals (seeSKIATRON); the deformation of an oil, thermoplastic, or other film; and electron-optical effects in crystals.

Some electron-beam instruments have targets comprising a dielectric layer on an electrically conducting substrate. Electric charges can be accumulated on such targets by means of an electron beam. A sequence of electric input signals is converted during scanning into a charge (potential) image on the target, which can be retained for the time interval required. The process may be termed signal writing. The information coded in this manner can be reproduced in the form of output electric signals by rescanning the target with an identical or different electron beam. This reverse process is called reading. A change in the reading scanning rate relative to the rate for writing makes it possible to alter the frequency spectrum of the output signals relative to that of the input signals for transmission over narrow-band communications channels. Changing the scanning method used for reading makes it possible to alter the signal sequence; such alteration is important, for example, when converting radar signals to television signals. By repeatedly accumulating periodic signals accompanied by random signals (interference) before reading, the ratio of useful signal to interference can be increased. Electron-beam instruments with targets of this type can also store signals and reproduce them with a time delay, compare signals with subsequent signals, and repeatedly reproduce a single recorded signal. Such instruments are called cathode-ray storage tubes. It is possible to combine dielectric targets with a luminescent screen in a single instrument designed to create a visual image that can be stored (seeSTORAGE TUBE, VISUAL). Such instruments are used to produce oscillograms of nonrepeating processes and to create a bright image without flicker. 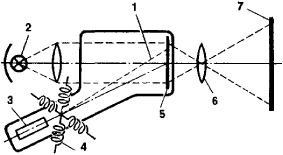 A special group of electron-beam instruments provides instantaneous conversion of electric signals by means of metal targets having various structures. In function-type electron-beam instruments, which belong to this group, a flat target has a multitude of apertures arranged in such a way that the electron transmission of the target is a given function z = f (x, y) of the x– and y-coordinates of the target. When two independent electric signals Ux and Uy are fed to both pairs of deflection plates so that the electron beam is deflected on the target to a point having the coordinates x and y, the electrons passing through the target register an output signal z in the circuit of a collector located behind the target. Each kind of function-type electron-beam instrument is designed to realize some particular function, such as z = xy,

, or z = arc tan y/x. Several such instruments can be connected in series. By using a metal target having rectangular apertures arranged according to some particular pattern, it is possible to convert an analogue signal into a discrete signal in the form of a sequential or parallel series of binary-code pulses. Electron-beam instruments having such targets are called cathode-ray coding tubes (seeCODER). If a target is divided into a number of sectors that are insulated from each other, then the instrument can be used as a commutator for low-current electric signals (see).

Depending on the purpose and the operating principle, electron-beam instruments may have more than one electron gun and may differ from the simplest types in exhibiting considerable structural complexity. However, all types operate on the basic principle of an interaction between controlled electron streams and targets.

Feedback
Flashcards & Bookmarks ?
Please log in or register to use Flashcards and Bookmarks. You can also log in with
Flashcards ?
My bookmarks ?
+ Add current page to bookmarks
Mentioned in ?
References in periodicals archive ?
About 35% to 40% of all electron-beam instruments currently use [LaB.sub.6].
Double your e-beam's life