(redirected from Electronic combat)
Also found in: Dictionary, Thesaurus, Acronyms.
Related to Electronic combat: electronic warfare
The following article is from The Great Soviet Encyclopedia (1979). It might be outdated or ideologically biased.

(ECM), measures taken to deliberately disrupt the normal operation of radioelectronic equipment for military purposes by using electronic techniques. ECM is used to protect aircraft, including airplanes, guided and ballistic missiles, and helicopters, surface ships, submarines, and ground targets from enemy detection by electronic devices and from destruction by radio-controlled missiles or other weapons. Such measures are also used to disrupt other enemy activities involving the use of radio equipment, for example, to jam radio communications. ECM includes actions taken against the operation of radio and radar equipment (radio ECM), infrared equipment (infrared ECM), and optical-electronic equipment, including lasers.

Radio ECM directed against the operation of radar stations, remote-control and data-transmission radio lines, radio-navigation devices, and radio-communications devices is accomplished by creating deliberate radio interference, changing the characteristics of signals reflected by objects, forming dummy targets, and using missiles that home in on targets that emit radio waves. Deliberate radio interference is one of the most common and effective radio-ECM techniques, particularly in countering the normal operation of radar equipment (see). Changes in the characteristics of reflected signals are achieved by reducing the intensity of reflection of radio waves or by distorting the structure of the radio waves when they are scattered by targets. Such changes of echo signals may also be achieved by using special coatings that absorb radio radiation, artificially changing the configuration of objects to camouflage distinctive features, or altering the propagating medium of radio waves, for example, by changing the properties of the plasma layer surrounding a ballistic missile.

Dummy targets are used to overload electronic systems that process data and sort targets, or they may be used to jam the reception of information on the attitude and movements of the target. This makes it difficult or impossible to launch a missile against the true target, or it can divert guided missiles or other means of destruction away from targets. Dummy targets are equipped with radio-wave reflectors or radio-interference transmitters; they include towed or self-propelled dummy missiles used in the protection of aircraft, and dummy targets located in the final stage of a missile or dummy warheads that separate from a launch vehicle used in the protection of ballistic-missile warheads. Radio equipment can be destroyed or damaged by missiles that home in on the radio waves emitted by the equipment.

ECM techniques employed against devices operating in the optical band are basically the same as those used in radio ECM. Infrared countermeasures primarily involve the use of dummy targets and camouflage. The dummy targets create artificial infrared radiation and divert enemy devices used for detection and weapons guidance from the true targets. Infrared camouflage reduces the heat contrast between the camouflaged objects and the surrounding environment. This is done by reducing the intensity of infrared radiation emitted by the camouflaged objects using special shields, heat-insulating coatings, and aerosol curtains, such as smoke, that absorb infrared radiation. For military weapons and equipment operating in the visible part of the optical band (for example, aerial bombs equipped with laser and television guidance, laser range finders, and lidar), ECM techniques are being developed that are similar to those used in radio and infrared ECM. 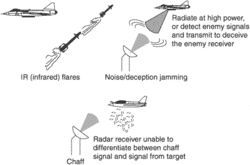 Some forms of electronic counter measures (ECM).
A branch of electronic warfare involving actions taken to prevent or reduce the effectiveness of energy, equipment, and tactics employing, or affected by, electromagnetic radiation and to exploit the enemy's use of such radiation. ECMs include electronic jamming and electronic deception. Normally referred to as ECM.
An Illustrated Dictionary of Aviation Copyright © 2005 by The McGraw-Hill Companies, Inc. All rights reserved

Feedback
Flashcards & Bookmarks ?
Please log in or register to use Flashcards and Bookmarks. You can also log in with
Flashcards ?
My bookmarks ?
+ Add current page to bookmarks
Mentioned in ?
References in periodicals archive ?
According to Thomas Batterman in a paper Security Assistance Software Support for Electronic Warfare Systems-Putting All The Pieces Together, (WR-ALC/ MMRS, 1983), the current Electronic Combat International Security Assistance Program (ECISAP) organization had it roots in 1980.
A primer of the United States Air Force aircraft/missile Technical Coordination Program
After almost six months and more than 220 sorties totalling nearly 2,000 combat flying hours and jamming more than 6,000 enemy signals in support of Operation Iraqi Freedom, the 41st Electronic Combat Squadron (ECS) was on its way home to Davis-Monthan AFB, AZ, at press time.
Compass Calls returning to upgrades. (EC Monitor)
Editor's note: Contributions for this article from Capt Adam Burch, 43rd Electronic Combat Sq., Davis-Monthan AFB, Ariz.
Hot & heavy
Prior to leaving the Air Force, John served as the government chair for an Aeronautical Systems Division Government/Industry Electronic Combat Test and Simulation Panel, playing an early role in the development of the OSD EC test process.
AOC 2003 election
The certificate that accompanied the award read in part: "From June 1977 to February 2003, Colonel Faulkner provided outstanding contributions to Electronic Warfare and Information Operations mission areas, serving as an Electronic Warfare Officer in the EF-111A, in the Tactical Air Command Electronic Combat Requirements Division, in Desert Storm as an Electronic Combat Planner, on the Joint Staff as a Senior Collections Manager and at the Air Force Research Laboratory ensuring the best use of science and technology for the Warfighter."
DSA to Lt Col Dan Faulkner. (AOC News)
Worth, TX), manufacturer of the F16, to integrate the ALQ-162 into the Electronic Combat Integrated Pylon System (ECIPS), a wing pylon configuration produced by Terma (Lystrup, Denmark) and flown on the F-16s of the European Participating Air Forces (EPAF)-Denmark.
Danish F-16s getting jammer upgrade. (European Report)
Joe Lawrence, director, Surveillance, Communi cations and Electronic Combat Division, Office of Naval Research, Code 313.
Radar/EW conference. (AOC News)
The Director of Operations for the 319th Bomb Wing was the pilot and our non-integral crew had just finished a tactical run against the Forsyth, Mont., bomb plot, which we now call electronic combat ranges.
Low-level locusts: Think through the potential on sequences of any plan