In earliest times, humankind believed in spirits that inhabited practically everything: a spirit of the river, the stream, the woods, rocks, thunder, lightning, wind, clouds, and so on. Four classes of spirits especially came to be associated with the four elements of air, fire, water, and earth. Sylphs were associated with air, salamanders with fire, undines with water, and gnomes with earth. Some Wiccan groups invoke these elementals as part of their rite of Casting the Circle. Some also believe that these elementals assist in the working of magic.

Janet and Stewart Farrar say that the term "elemental" is used for a thoughtform that, "spontaneously by strong emotion or deliberately by mental effort, is split off from its human originator and acquires temporary quasi-independent existence." Such elementals, they claim, may be used for doing healing work. 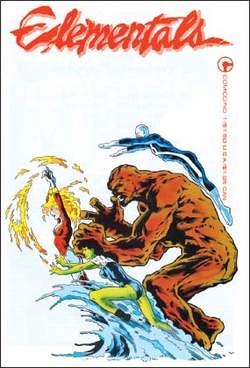 Earth, wind, fire, water. Element-based superpowers may seem routine in the world of superheroes—Geo-Force, Swamp Thing, Storm, Human Torch, and Aquaman are just a few of the characters who possess them—but in the hands of creator Bill Willingham, they were anything but pedestrian. Premiering in Texas Comics’ Justice Machine Annual #1 (1984), the Elementals were four ordinary, unrelated people—Tommy Czuchra, a precocious fourteen-year-old orphan; Jeff Murphy, a thrill-seeking professional pilot; Jeanette Crane, a passionate Los Angeles cop; and Rebecca Golden, a pampered heiress—who die. But not for long.

They return from the grave with abilities that connect them to the planet’s natural order. Czuchra can transform into the superstrong Monolith, a being of living stone. Murphy becomes Vortex, able to soar at fantastic speeds and project concussive blasts. Crane pyro-kinetically masters fire and heat immunity. Golden—who now has green skin, and webbed fingers and toes—becomes Fathom (no relation to Mike Turner’s similarly named heroine), manipulating (and even becoming) water. In the first story arc, “The Natural Order,” writer/artist Willingham pushes the envelope by delving into subject matter that Marvel and DC Comics (at the time) considered taboo: the social and psychological repercussions of resurrection from the dead, and graphic explorations of violence and sociopathic behavior.

Independent publisher, Comico the Comic Company, picked up Willingham’s creator-owned superteam shortly after the Texas Comics debut and issued Elementals #1 in 1984. Erratically released at first, Elementals garnered a loyal fan base, largely due to Willingham’s provocative creative voice. As a writer, he stretched with each installment; over time, he addressed occultism, child abuse, sexual identity, religious obsession, immoral ministers, depression, and suicide, all while delivering well-paced, solidly scripted superhero stories. A disciple of folklore, Willingham also introduced fantasy themes into Elementals, with storybook and mythological characters appearing, territory he later continued to cover by writing the critically acclaimed series Fables (2002-present) for DC Comics’ Vertigo imprint. As an artist, Willingham matured with each issue; while starting as a competent copycat (popular Batman and Micronauts artist Michael Golden’s influence is quite obvious in his early work), Willingham always commanded a firm grasp of storytelling, and blossomed into a remarkably talented illustrator.

But Willingham came and went, and Elementals issues written and drawn by others lacked his magic and verve. In early 1989, Comico devised a “best of both worlds” scenario to keep Willingham on the title and publish what had become a strong seller for the company on a monthly schedule: Ele-mentals was relaunched with vol. 2 issue #1, with Willingham scripting and providing cover art, but with Mike Leeke and Mike Chen on interior art (superstar artist Adam Hughes, then an up-and-comer, guest-penciled Elementals #12). This plan worked well—until bankruptcy forced Comico to close its doors in the early 1990s. Not long thereafter, a new financier revived Comico and purchased Elementals from its creator. Willingham and the artists and editors involved with the earlier, groundbreaking series chose not to participate in this new venture, and the new publisher pandered to the marketplace with some gratuitously exploitative comics involving the characters (including Elementals Sex Special #1-#4 and Elementals Sexy Lingerie Special #1). The new Comico was dead by the mid-1990s, and it took Elementals to the grave with it, an unfortunate conclusion to a once-celebrated series. —ME

Feedback
Flashcards & Bookmarks ?
Please log in or register to use Flashcards and Bookmarks. You can also log in with
Flashcards ?
My bookmarks ?
+ Add current page to bookmarks
Mentioned in ?
References in periodicals archive ?
In 'Far From Home', Fury recruits Peter to help look into these Elementals. But the trailer reveals another mysterious figure stepping up to fight these creatures: Mysterio.
Unfortunately for him, there are a number of elemental creatures wreaking havoc across the continent, prompting a visit from the also very much alive Nick Fury.
'Spider-Man: Far From Home' meets Mysterio in Europe
Regarding what to do with your house, and whether you should let elementals make decisions for you: of course not.
There's no escaping the laws of karma
The Crystal Core Rogue combo is super simple: summon Igneous Elemental or Fire Fly and get at least four copies of a Flame Elemental in your hand.
Mulligans: You really want Igneous Elemental, Fire Fly or Swashburglar in your opening hand; the only goal is to finish your Quest as quickly as possible and then go face.
'Hearthstone' Crystal Core Rogue Guide: The Most Broken Deck In 'Journey To Un'Goro'
The Rogue Quest, (https://www.reddit.com/r/hearthstone/comments/63yaag/rogue_quest_broken_af_calling_it_right_now_if/) Caverns Below , has already proven to be quite popular (and broken), but there's one other deck that players are latching onto: Elemental Shaman.
'Hearthstone' Elemental Deck Guide: How To Play Shaman In 'Journey To Un'Goro'
Elemental Shakedown members hail from all over the country and find themselves now in the midst of a Midwest bluegrass boom.
2012 Best Bluegrass Band in St. Louis to Visit East Peoria at Meadows Ave Tap on 12/15/12
Elemental Security, Inc., San Matero, Calif., the award-winning pioneer of new technology in enterprise information security, has announced that its Elemental Security Platform (ESP) has been certified by the Center for Internet Security (CIS) for the CIS Mac OS X Benchmark v1.02.
ESP PLATFORM CERTIFIED FOR CIS MAC OS X BENCHMARK V1.02