[′el·ə·mənts]
(astronomy)
A set of quantities specifying the orbit of a member of the solar system or of a binary star system, used to calculate the body's position at any time.
(mechanics)
The various features of a trajectory such as the angle of departure, maximum ordinate, angle of fall, and so on.
(navigation)
The specific values of the coordinates used to define the position of an aircraft or vessel.
McGraw-Hill Dictionary of Scientific & Technical Terms, 6E, Copyright © 2003 by The McGraw-Hill Companies, Inc. 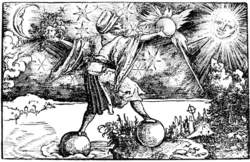 Empedocles, the Greek philosopher of the fifth century BCE, advanced the theory that all things were made up of the four elements of air, fire, water, and earth. This theory became widely accepted and is still recognized by modern occultists. The four elements are associated with the four cardinal points of the magic circle. East is Air, South is Fire, West is Water, and North is Earth.

Symbolic meanings are associated with each of these elements. Air and fire are both considered positive, active, creative, and masculine elements, while earth and water are negative, passive, receptive, and feminine elements.

As with Ceremonial Magicians, Witches consecrate their working tools and other sacred objects by utilizing the four elements.

A fifteenth-century woodcut depicting the four elements: wood (Earth) burned by flames (fire) while a bird (air) flies above the sea (water). Reproduced by permission of Fortean Picture Library.

The primary categories by which the signs are classified are the four elements (earth, air, fire, and water) and the three qualities (cardinal, mutable, and fixed). Each of the 12 signs of the zodiac is a unique combination of an element and a quality (e.g., Aries is a cardinal fire sign, Taurus a fixed earth sign, Gemini a mutable air sign, and so forth). The elemental nature of a sign is said to refer to its basic temperament, while its quality refers to its mode of expression.

People whose only contact with the word element was in a science class immediately think of the materials diagramed by the periodic table—oxygen, iron, hydrogen, silicon, and the like—when they hear the term. It thus strikes them as strange to consider earth, air, fire, and water by this designation. The astrological elements derive from the elements of ancient Greek philosophy. Classical philosophy and modern science share an interest in discovering the basic—the “elementary”—building blocks of the world. Prior to the advent of contemporary atomic theory, intelligent people examining the world in which they lived observed that all tangible things could be classified as solids (earth), liquids (water), or gases (air). Sources of heat and light, such as fire and the Sun, seemed to constitute a fourth factor (fire), which can be thought of as “energy.” When reworded as solid, liquid, gas, and energy, this ancient scheme of classification is not really so strange.

When the ancients analyzed the human being in terms of these four factors, it appeared to them that the physical body was earthy, feeling and emotions watery, and thoughts airy. The fire element provided the spark of life that animated the human frame with activity. From this way of looking at human nature, it was but a short step to regarding sensitive, emotional people as having more of the water “element” in their constitution than their fellows, mental people as having more air, practical people as having more earth, and energetic, active people as having more fire. When astrology was being systematized in ancient Greece, this “psychological” system was applied to the 12 signs, resulting in a classification according to the four classical elements: the fire triplicity, Aries, Leo, and Sagittarius (energy signs); the earth triplicity, Taurus, Virgo, and Capricorn (practical signs); the air triplicity, Gemini, Libra, and Aquarius (mental signs); and the water triplicity, Cancer, Scorpio, and Pisces (emotional signs).

One finds the same set of four elements and the same classification of signs by element in Vedic astrology. The connotations are basically the same as in Western astrology.

Feedback
Flashcards & Bookmarks ?
Please log in or register to use Flashcards and Bookmarks. You can also log in with
Flashcards ?
My bookmarks ?
+ Add current page to bookmarks
Mentioned in ?
References in periodicals archive ?
[USPRwire, Wed Jul 31 2019] A newly compiled business intelligent report, titled "Global Confectionery Decorative Elements Market Insights Forecast to 2025" has been publicized to the vast archive of Market Research Hub (MRH) online repository.
Confectionery Decorative Elements Market Production, Product Quality, Breakdown Data by Manufacturer
The latest report on the global Membrane Elements market suggests a positive growth rate in the coming years.
Global Membrane Elements Market 2019 Demand, Growth, Opportunities, Top Key Players and Forecast to
Susan Thorpe (WordWays August 2018) has found pairs of words whose elements can produce meaningful sentences.
E PLURIBuS uNuM
Typically, for a multibody model geometry it is quite difficult to build a conformal finite element mesh consisting of hexahedral elements only for which the SEM [3] was initially developed.
The Implementation of Spectral Element Method in a CAE System for the Solution of Elasticity Problems on Hybrid Curvilinear Meshes
In this study, we propose an iterative mesh untangling and smoothing method using mesh modification methods when inverted elements are produced during mesh generation or mesh deformations.
An Iterative Mesh Untangling Algorithm Using Edge Flip
collaboration had sufficient evidence to claim the discovery of elements 115,117 and 118.
Periodic table gets 4 more elements: naming rights go to U.S., Russian and Japanese scientists
Last week, the International Union of Pure and Applied Chemistry (IUPAC) which assesses such new discoveries, gave the go-ahead to the 4 new elements.
The Periodic Table Is Complete!
Four new super-heavy chemical elements, currently using temporary names, complete the seventh row of the periodic table, (http://www.iupac.org/news/news-detail/article/discovery-and-assignment-of-elements-with-atomic-numbers-113-115-117-and-118.html) International Union of Pure and Applied Chemistry (IUPAC) said on its website.
Periodic Table Gets 4 New Elements
25 -- After the much celebrated release of Photoshop CS6 (and other consequent CS6 upgrades of other products), Adobe has announced the availability of Photoshop and Premiere Elements 11.
Adobe releases Photoshop and Premiere Elements 11
Many research papers have been written about the discovery of the Periodic Law of Elements. Many spectacular versions of this law have likewise been suggested.
The upper limit of the periodic table of elements points out to the "long" version of the table, instead of the "short" one
Elements (el-e-ments) are in everything (ev-ery-thing)!
The periodic table
In case you missed the news, the International Union of Pure and Applied Chemistry and the International Union of Pure and Applied Physics recently added two new elements to the periodic table.
And then there were 114