in mathematics, those elements—called points, lines, planes—which are added to the Euclidean plane or Euclidean space to make possible the interpretation of certain branches of mathematics—projective geometry, the theory of functions of a complex variable, and other branches.

The origin of the term “element at infinity” is most easily deduced from the following example. Let us consider the parallel lines a and a' in the Euclidean plane a (Figure 1) and the straight line b, which intersects them at points M and M', respectively. We will rotate line b around point M' in the direction indicated by the arrow in the figure until it coincides with line a'. It is evident that as line b approaches line a', point M of intersection of lines a and b will move away to infinity. This process explains clearly enough the often used expression “parallel straight lines intersect at a point at infinity.”

The above visual presentations form the basis of the interpretation of two-dimensional projective geometry on the Euclidean plane ɑ. For this purpose, points at infinity and 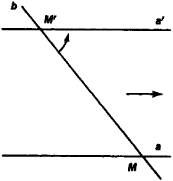