(redirected from Emperor Ming The Merciless) 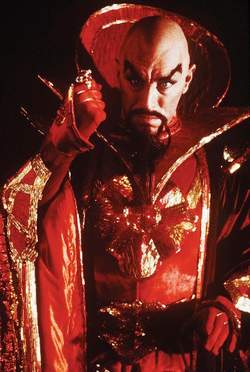 Max von Sydow as Ming the Merciless in Flash Gordon (1980).

(pop culture)
The black-hearted warlord Ming the Merciless was introduced in the opening storyline of the science-fiction comic strip Flash Gordon. Co-created by celebrated artist Alex Raymond and writer Don Moore as a Sunday-only feature beginning on January 7, 1934, it became a daily strip in 1940. King Features Syndicate's answer to Buck Rogers in the 25th Century (which premiered in 1929), Flash Gordon begins with Earth imperiled by the planet Mongo, which is careening toward our world like a comet on a collision course. “Only Miracle Can Save Us” reads a newspaper headline, that miracle being handsome athlete-turned-swashbuckler Gordon— although Flash and his companion by chance, the comely Dale Arden, are “drafted” into heroic duty at gunpoint by the eccentric scientist Dr. Hans Zarkov. In Zarkov's spaceship they take the battle directly to Mongo, encountering its sadistic Emperor Ming and ultimately halting his threat. Flash remains on Mongo to network with a growing resistance movement to overthrow Ming's oppression, propelling future storylines (drawn in later years by Austin Briggs, Mac Raboy, and Dan Barry). Emporer Ming embodied many of the physical characteristics of the Fu Manchu–like Asian mastermind (as did Buck Rogers' adversary, the lesser-known Killer Kane), including a widow's peak skull cap, robes, and a goatee. He has no redeeming values and relishes in his evil. His “coldly scientific and ruthless” race has perfected ray-blasting spacecrafts, a “dehumanizing machine” that zaps the wills of his opponents, a “spacegraph” surveillance monitor that enables Ming to keep an eye on various ports of call across the universe, a lethal dust called the “Purple Death,” and a “paralyzo-ray” that stops attackers dead in their tracks. Ming demands blind obedience and will not tolerate failure—the soldiers in his thrall who fall short in their missions face flogging, dungeon imprisonment, or execution. His daughter, the exquisite Princess Aura, has designs for Gordon, earning her father's scorn. Ming is also an accomplished swordsman. Flash Gordon has battled Ming the Merciless in a variety of media. Stern-faced actor Charles Middleton frightened theatergoers as Ming in the movie serials Flash Gordon (1936), Flash Gordon's Trip to Mars (1938), and Flash Gordon Conquers the Universe (1940); these serials were later re-released as full-length features. Ming's quote “Pathetic Earthlings … Who Can Save You Now?” was the tagline of Flash Gordon (1980), a high-octane movie updating of the original comic strip buoyed by Max von Sydow's twisted turn as the Emperor. Screenwriter Stephen Sommers (The Mummy, 1999) is returning Ming to the big screen in Flash Gordon (in development in 2006). Ming has appeared in numerous original Flash Gordon novels, Big Little Books, and comic-book series issued from a variety of publishers, as well as in three television cartoons: 1979's The New Animated Adventures of Flash Gordon, 1986's Defenders of the Earth, and 1996's Flash Gordon. To avoid racial stereotyping, in the latter series Ming was redesigned a pointyeared reptile-man. Ming action figures tying into the animated series were produced, as was an elaborate Ming outfit for the poseable figure of Captain Action's arch-foe, the original Dr. Evil.
The Supervillain Book: The Evil Side of Comics and Hollywood © 2006 Visible Ink Press®. All rights reserved.