The vernier caliper (Figure 1) is the most widely used end-measuring instrument. The first vernier calipers appeared in the late 18th century in London, although wooden caliper rules without verniers were used as early as the 17th century. Three types of vernier calipers are manufactured in eight standard sizes; the types differ in design and in the number of measuring jaws. For measurements of up to 400 mm, the jaws may be extended from the zero reading. For larger dimensions, the zero point of a measurement does not coincide with the zero mark.

Vernier calipers with an instrument range extending from 0 to 125 or 150 mm and with readings in 0.1 mm have two sets of jaws (Figure 1 ,a) as well as a rule depth gauge for measuring such dimensions as the depth to a shoulder or the depth of a groove or a hole. The lower jaws are used to measure outside dimensions; the upper jaws, inside dimensions.

Vernier calipers with an instrument range extending up to 250 or 160 mm and with readings in 0.1 or 0.05 mm (Figure l,b) also have two sets of jaws. However, the lower jaws are used for both outside and inside measurements, while the upper jaws are employed to lay out or measure outside dimensions inside narrow shallow grooves and holes. The upper jaws may be used to scribe parallel lines, circles, and other elements of the shape of a part to be machined (seeLAYOUT TOOL). In such vernier calipers, the jaws for measuring inside dimensions have cylindrical surfaces. The size of the jaws when closed is usually 10 mm; the jaw size is stamped on a surface that is not used for measurement and is added to the reading when inside dimensions are measured.

Vernier calipers with an instrument range extending to an upper limit of 400 to 2,000 mm have a single set of jaws that is similar in design to the lower jaws of the caliper shown in Figure 1 ,b. The last two types of vernier calipers have a micrometer feed, which is used mainly in layout work, for the more precise determination of a dimension. The readings on such calipers are in 0.1 mm.

In contrast to a vernier caliper, a height gauge (Figure 2) has a base rather than a fixed jaw. Measurements are made from the bottom of the base, which corresponds to the zero reading on the scale. The sliding head is equipped with a holder rather than a movable jaw. For layout work, a stylus or a scriber is attached to the holder; for measurement, a special set of measuring jaws or a bracket for fastening a meter—such as a dial indicator—is attached to the holder. Height gauges are usually employed in layout work on plates. In such work, the gauge is mounted on the plate together with the workpiece to be laid out or measured. On a workpiece to be laid out, lines are scribed with a scriber when the height gauge is moved over the surface of the plate. Height gauges are manufactured in six standard sizes with readings in 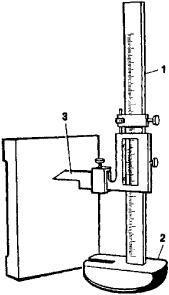