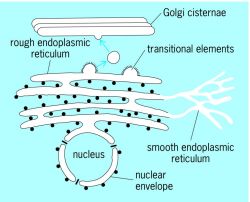 Nuclear envelope, connected to the rough and smooth endoplasmic reticulum

The signal hypothesis was formulated to explain how these proteins are targeted to and then translocated across or integrated into the endoplasmic reticulum membrane. Its tenets are that all polypeptides targeted to this membrane contain a discrete sequence (termed the signal sequence), that a complex machinery recognizes this sequence, and that recognition triggers the opening of a proteinaceous channel through which the polypeptide passes across the membrane. In the case of membrane proteins, the existence of an additional topogenic sequence, the so-called stop-transfer sequence, was postulated. This sequence is thought to trigger opening of the channel to the lipid bilayer to abort translocation and thus integrate the protein into the lipid bilayer.

The rough endoplasmic reticulum also contains numerous enzymes, most of which are involved in the modification of the nascent protein chain on the cisternal side. Thus the main function of the rough endoplasmic reticulum and the outer nuclear membrane is to serve as a port of entry of secretory, lysosomal, and integral membrane proteins and as the site of their initial modification.

Secretory and lysosomal proteins as well as those integral membrane proteins that are not residents of the endoplasmic reticulum are next transported to the cis Golgi cisternae. The transitional elements represent sites of transport from the rough endoplasmic reticulum. Coated vesicles carrying proteins to be transported form at these sites and, after uncoating, eventually fuse with the cis Golgi cisternae. See Golgi apparatus

in biology, an intracellular organoid that consists of a system of flat cisternae, tubules, and vesicles that are bounded by membranes. Its main function is to ensure the transfer of matter from the surrounding medium into the cytoplasm and between intracellular structures. The endoplasmic reticulum was discovered with an electron microscope in 1945 by K. Porter and other American scientists. It is usually located in the cytoplasm immediately surrounding the nucleus (the endoplasm) in all the cells, except the erythrocytes, of eukaryotes.

The structure and number of elements in the endoplasmic reticulum depend on the functional activity of the cell and on the stage of the cell cycle and differentiation. The membrane is 5–6 nm thick, and the width of the lumen between the membranes is 70–500 nanometers. Analysis of the microsomal fraction of a homogenate of cells has shown that the membranes of the endoplasmic reticulum consist of proteins, lipids, and several enzymes.

A specialized form of endoplasmic reticulum, the sarcoplasmic network of the striated muscles, plays an important role in the intracellular conduction of excitation.