epinephrine (ĕpˌənĕfˈrīn), hormone important to the body's metabolism, also known as adrenaline. Epinephrine, a catecholamine, together with norepinephrine, is secreted principally by the medulla of the adrenal gland. Heightened secretion caused perhaps by fear or anger, will result in increased heart rate and the hydrolysis of glycogen to glucose. This reaction, often called the “fight or flight” response, prepares the body for strenuous activity. The hormone was first extracted (1901) from the adrenal glands of animals by Jokichi Takamine; it was synthesized (1904) by Friedrich Stolz. Epinephrine is used medicinally as a stimulant in cardiac arrest, as a vasoconstrictor in shock, as a bronchodilator and antispasmodic in bronchial asthma, and to lower intra-ocular pressure in the treatment of glaucoma. 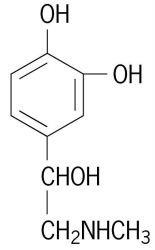