see telescopetelescope,
traditionally, a system of lenses, mirrors, or both, used to gather light from a distant object and form an image of it. Traditional optical telescopes, which are the subject of this article, also are used to magnify objects on earth and in astronomy; other types of
..... Click the link for more information. .
The Columbia Electronic Encyclopedia™ Copyright © 2013, Columbia University Press. Licensed from Columbia University Press. All rights reserved. www.cc.columbia.edu/cu/cup/ 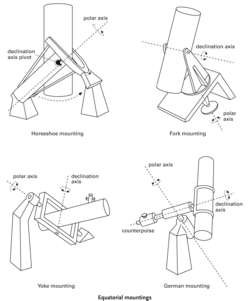 A telescope mounting in which one axis (the polar axis) is parallel to the Earth's axis of rotation, while the second axis (the declination axis) is at right angles to it. Its great advantage is that when the telescope is clamped in declination, and the polar axis is driven to turn once in 24 hours in the opposite direction to the Earth's rotation, any star will remain stationary in the field of view. Until recently almost every large telescope was equatorially mounted, but the constantly changing stresses involved in swinging possibly hundreds of tonnes of asymmetrically shaped material about an inclined axis mean that the mounting must be extremely strong and hence extremely costly, so as a result many telescopes are now constructed with a computer-controlled altazimuth mounting.

The drive mechanism for the telescope is usually called a drive clock; in modern telescopes it is often an electric motor controlled by a variable frequency generator. A telescope is usually driven, about its polar axis, at the sidereal rate so that one rotation is completed in 23h 56m 4s, the duration of one sidereal day. Small corrections are required in drive rates because of atmospheric refraction and when following the Moon or planets, which move relative to the stars. These corrections are achieved by varying the frequency supplied to the drive motor.

a telescope mounting that has two axes of rotation. One axis is directed toward the celestial pole and forms with the plane of the horizon an angle equal to the geographic latitude of the point of observation. The second axis is perpendicular to the first and lies in the plane of the celestial equator. The axes permit the telescope to be turned and directed at a point of the sky with specified coordinates (hour angle and declination). To compensate for the diurnal motion of the stars, the telescope is turned by a clock mechanism around the polar axis at a rate of one revolution per sidereal day.

[‚e·kwə′tȯr·ē·əl ′mau̇nt·iŋ]
(engineering)
The mounting of an equatorial telescope; it has two perpendicular axes, the polar axis (parallel to the earth's axis) that turns on fixed bearings, and the declination axis, supported by the polar axis.
McGraw-Hill Dictionary of Scientific & Technical Terms, 6E, Copyright © 2003 by The McGraw-Hill Companies, Inc.

Feedback
Flashcards & Bookmarks ?
Please log in or register to use Flashcards and Bookmarks. You can also log in with
Flashcards ?
My bookmarks ?
+ Add current page to bookmarks
Mentioned in ?
References in periodicals archive ?
Today, it remains one of the largest equatorial mounts in the world.
When Color Came from Down Under: Astronomy had to wait nearly 100 years before one astronomer popularized the color of the universe
Caption: iOptron's new CEM120 Center-balanced Equatorial Mount is the company's current heavyweight, with a rated load capacity of up to 115 pounds.
iOptron's CEM120 Equatorial Mount: This heavyweight in iOptron's growing line of telescope mounts offers lots more than just a big payload capacity
The telescopes have a C-ring equatorial mount, with an optical design comprised of an f/2.5 Hextek light-weight primary mirror and a 330mm diameter Hextek secondary.
LCOGT news
They deliberately designed the English cross-axis equatorial mount to be strong and stiff enough to carry the mass of a 60-inch reflector, should a larger telescope someday be desired.
New Life for the Great Melbourne Telescope: Australian groups are restoring what was once the world's largest equatorially mounted telescope
The top of the tube was set at a height which would result in a height over the observatory floor of 80cm--I had to extend this by another 30cm when I moved from a fork to a German equatorial mount. Around the top and bottom of the pier I clamped shaped 50x150mm oak timbers and connected these with four vertical 50x75mm oak struts--these give a very solid 300mm square platform on which to install the mount.
An observatory in the Pennines
The telescope has an open-lattice carbon-fibre truss-tube with light-weight Hextec mirrors on a split-ring horse-shoe equatorial mount. A prototype mount fitted with two smaller telescopes was installed in the test dome in their car park.
A telescope "farm" for Sutherland
While in a pinch it could be mounted on a small tracker, the Meade performs best on a full-sized but small equatorial mount capable of accepting an autoguider.
Meade's Mini Astrograph: The new Series 6000 70-mm apo astrograph delivers tack-sharp images across a wide field
The principal piece of equipment that every advancing astrophotographer needs is a good tracking equatorial mount. That's because the biggest hurdle we face is that our targets are constantly moving across the sky.
Astronomy photography: what to know: it used to be tough. But now, modern cameras and telescopes have opened up astrophotography to everyone. Interested? Here's where to start
Joop de Jager presented his imposing black instrument on a foldable split-ring equatorial mount with electronic drive control.
ScopeX 2009
To make the necessary star-trail image, you need to attach a digital camera with a standard or a short telephoto lens to your equatorial mount or telescope tube and direct it at the celestial pole.
Polar Alignment with Camera and Spreadsheet: Digital photography and a computer spreadsheet offer a new twist for precision polar alignment of equatorial telescopes
My 30cm LX200 optical tube does not have a dovetail bar so the options for attaching it to a commercial German equatorial mount boiled down to three: screw a plate between mirror cell and corrector cell onto which a dovetail bar could be mounted; make a cradle to wrap around the tube and attach that to a dovetail; or, possibly, buy a commercial system like a Homeyer (4) or Parallax Instruments (5) cradle.
A Schmidt-Cassegrain telescope re-mounted
The German equatorial mount was manufactured by Software Bisque, located in Golden, Colorado, USA.
Two new telescopes commissioned in Sutherland