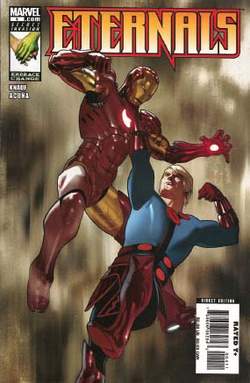 After introducing the New Gods at DC Comics, writer/artist Jack Kirby returned to Marvel Comics in the mid-1970s to create another race of godlike superhumans that made their debut in The Eternals Vol. 1 #1 (July 1976).

According to Kirby’s series, a race of gigantic, armored, virtually all-powerful and enigmatic aliens called the Celestials visited the Earth in prehistoric times. They conducted genetic engineering experiments on ancestors of the human race, thereby creating two other, divergent races of humanity.

One of these races was the Eternals, superhuman beings who are virtually immortal. Each Eternal’s mental control over his physical body makes him virtually unkillable. Eternals are super-humanly strong, can fly through self-levitation, and can project heat and concussive energy beams from their eyes and hands. Individual Eternals specialize in developing specific superpowers to a greater degree than other members of their race. A large enough group of Eternals can meld into a powerful, collective being called the Uni-Mind.

The other race created by the Celestials was the Deviants. They are a grotesque, genetically unstable race, and each Deviant differs in physical appearance from the others.

Over the course of human history, Eternals have inspired many of humanity’s myths of gods and heroes of superhuman prowess. In contrast, over the ages humans have perceived the Deviants as devils and demons. Whereas the Eternals act as protectors of Earth, the Deviants once conquered much of humanity, before the sinking of Atlantis.

In recent times, the Celestials returned to Earth to spend fifty years observing humanity before delivering judgment on the human race. The series’ leading character was Ikaris, an Eternal who had devoted his life to battling Deviants and monsters. And there were a variety of other important Eternals characters.

Zuras was based on the Greek god Zeus, and was ruler of the Eternals. Zuras’s daughter was the feisty, beautiful Thena, who was based on Athena, the Greek goddess of wisdom and war. Thena had a romantic liaison with Warlord Kro, an antiheroic member of the Deviants.

Sersi is the same character who appears in Homer’s epic poem, The Odyssey, under the name Circe. She specializes in mentally rearranging and transmuting the molecular structure of matter. Celebrated for her hedonistic lifestyle and love of giving parties, Sersi can also be fierce and formidable in combat.

Makkari is based on the Roman god Mercury, and specializes in moving at superhuman speed. It was later established that two superheroes co-created by Kirby in the Golden Age for Timely Comics (now known as Marvel), Mercury (from Red Raven Comics #1, August 1940) and the Hurricane (from Captain America Comics #1, March 1941) were alternate identities for Makkari.

The Forgotten One was a great hero who helped inspire the tales of mythic figures like Hercules, but was later exiled by Zuras. He later assumed his former name of Gilgamesh, identifying him as the hero of the Babylonian Epic of Gilgamesh, the first great superhuman hero in literature.

Kirby’s original Eternals series ended with issue #19 (January 1978). Writer Roy Thomas had the Eternals appear as guest stars in Thor, making it clear that they were part of the Marvel universe. A maxi-series of The Eternals (Volume 2, 19851986) was written first by Peter B. Gillis, and later by Walter Simonson, with art by Sal Buscema. In this series Gillis and Buscema introduced a major villain, Lord Ghaur, high priest of the Deviants. Subsequently, Sersi and Gilgamesh both became members of the superhero team the Avengers. Neil Gaiman, the acclaimed fantasy writer and author of DC’s Sandman series, and artist John Romita, Jr. collaborated on a new Eternals limited series (Vol. 3) that ran from 2006 to 2007. This was followed in 2008 by a new ongoing Eternals series (Vol. 4), which was canceled in 2009. —PS