(700–280 B.C.)
A style which flourished in western central Italy until the Roman conquest; it is largely lost, except for underground tombs and city walls, but the characteristic true stone arch influenced later Roman construction methods. Examples that have survived show forms that were rich in ornamentation.
Illustrated Dictionary of Architecture Copyright © 2012, 2002, 1998 by The McGraw-Hill Companies, Inc. All rights reserved 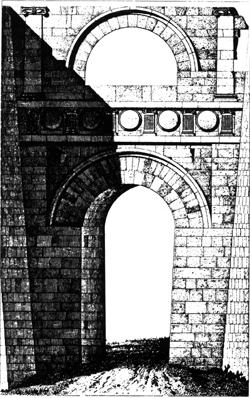 Etruscan architecture: Arch of Augustus, Perugia
The architecture of the Etruscan people in western central Italy from the 8th century B.C. until their conquest by the Romans in 281 B.C. Apart from some underground tombs and city walls, it is largely lost, but remains important for the influence of its construction methods on Roman architecture, e.g., the stone arch.
McGraw-Hill Dictionary of Architecture and Construction. Copyright © 2003 by McGraw-Hill Companies, Inc.

Feedback
Flashcards & Bookmarks ?
Please log in or register to use Flashcards and Bookmarks. You can also log in with
Flashcards ?
My bookmarks ?
+ Add current page to bookmarks
Mentioned in ?
References in periodicals archive ?
He not only dismissed the role of Greek influence on Etruscan art, he also advocated the superiority of Etruscan architecture over most other classical architecture.
Etruscan origins and Italian nationalism
(Somewhat bizarrely, St Mary was omitted from Sinclair's pentangle --including it and excluding St Alfege creates a neat pentangle north of the Thames, while the opposite renders the pentangle undrawable.) Further north, Hawksmoor's masterpiece, Christ Church, Spitalfields, has an ominous, pyramidal spire above an arched portico influenced by classical Etruscan architecture.
No ordinary churches: pagan symbolism, occult designs from ancient Egypt, flesh-eating gods, Masonic cults, Jack the Ripper ... Charlie Furniss explores the bizarre architectural legacy of Nicholas Hawksmoor