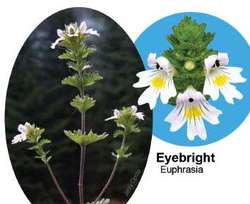 White flowers have purple lines, tiny leaves with bristles. Contains a bioflavonoid that strengthens the blood vessels in the back of the eye. Good for itchy, watery eyes, hay fever. Also used for coughs, congestion, sinus infections, sore throat, ear aches and headaches. The whole plant is edible. Test small amounts first.
Edible Plant Guide © 2012 Markus Rothkranz
The following article is from The Great Soviet Encyclopedia (1979). It might be outdated or ideologically biased.

(eyebright), a genus of plants of the family Scrophulariaceae. The plants are annual and, less commonly, perennial hemiparasitic grasses. The leaves are opposite, sessile, and serrate or toothed. The small flowers have two-lipped corollas and are white, lilac, or purple. They are borne singly in the axils of the bracts, forming long spicate inflorescences. The fruit is a capsule.

There are approximately 200 species of eyebright. They are commonly polymorphic. The plants are distributed throughout the northern hemisphere, as well as in the mountains of the Malay Archipelago, in Australia, and in the temperate zone of South America. About 60 species are found throughout the USSR, growing in meadows, pastures, open fields, and thickets. The most common species is E. stricta, which, like many other species of Euphrasia, parasitizes grains. It sometimes reduces meadow harvests significantly.

Feedback
Flashcards & Bookmarks ?
Please log in or register to use Flashcards and Bookmarks. You can also log in with
Flashcards ?
My bookmarks ?
+ Add current page to bookmarks
Mentioned in ?
References in periodicals archive ?
Sambucus nigra, Euphrasia officinalis, Inula helenium, Glycyrrhiza glabra and Oleo europa)
A systemic approach to respiratory health
Eyebright (Euphrasia officinalis): The aerial parts (any part of the plant above ground) of this tiny plant are both astringent and anti-inflammatory, and decrease the hypersensitive response of the mucous membranes in the eyes, nose, throat, and ears.
Nothing to sneeze at: relieve springtime hay fever with soothing herbs
Some common herbs not discussed include Sambucus nigra, Euphrasia officinalis, Scuttellaria lateriflora and Fucus vesiculosus.
Herbs & natural supplements: an evidence-based guide
Euphrasia Officinalis (Eyebright) is indicated for a variety of conditions that affect the eyes, nose and sinuses.
Complementary medicine