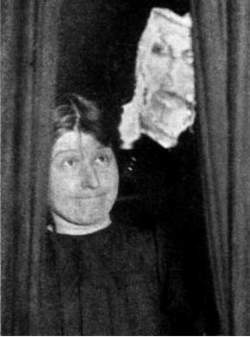 Eva Carriere, whose real name was Marthe Béraud, was discovered as a medium in Algiers by a General Noel and his wife. “Eva” had been engaged to their son Maurice, before his death in the Congo. Eva was the daughter of a French army officer and became one of the most controversial physical mediums of the early twentieth century.

General Noel invited noted physiologist and psychical researcher Professor Charles Richet to investigate Eva. At the Villa Carmen in Algiers, Richet saw the materialization of a full-size figure known by Eva as Bien Boa. Bien Boa was supposedly a 300-year-old Brahmin Hindu and the spiritual guide for the Noel family. He had a sister named Bergoglia, who also occasionally manifested. In photographs Bien Boa looks like a large cardboard cutout, as do several of the materializations produced by Eva C. Richet noted an artificial quality to Bien Boa’s beard but seemed satisfied that the medium had produced him paranormally. The professor published the results of his investigation in the April, 1906, edition of Annales des Sciences Psychiques.

Some years later in Paris, Eva C. was examined by psychic researchers Baron A. von Schrenck-Notzing and Gustav Geley. (It was the baron who gave the medium her professional name of Eva C.) Geley later published a book, Clairvoyance and Materialization (New York, 1927), which contained a number of photographs taken of Eva C producing ectoplasm while in trance. Fodor reported that during her trances, Eva “suffered much, writhing like a woman in childbirth and her pulse rose from 90 to 120.”

Eva C. was also studied by the British Psychical Research Society, though she failed to impress them. In her later séances, she was unable to produce as well-developed forms as earlier and the materializations were much slower and seemed more difficult. Eva was made to wear special dresses or even, on many occasions, to sit in the nude. A battery of eight cameras, two of them stereoscopic, was trained on her and 225 photographs obtained, the sittings being held in good light. Of a séance held on April 15, 1912, Professor Richet said, “The manifestations began at once. White substance appeared on the neck of the medium; then a head was formed which moved from left to right and placed itself on the medium’s head. A photograph was taken. After the flashlight the head reappeared by the side of Eva’s head, about sixteen inches from it, connected by a long bunch of white substance. It looked like the head of a man … a woman’s head then appeared on the right.” The medium was carefully searched both before and immediately after the sitting.

At a séance on November 26, 1913, conducted by Baron von Schrenck-Notzing, a strong emetic was given to Eva, to answer the charge that the ectoplasm was actually regurgitated material. It satisfied the researchers that she had swallowed nothing. A number of experiments took place at Dr. Gustav Geley’s laboratories in 1917 and 1918. Nearly 150 scientists and others witnessed the sittings. Geley said,

“The usual precautions were rigorously observed during the séances in my laboratory. On coming into the room where the séances were held and to which I alone had previous access, the medium was completely undressed in my presence and dressed in a tight garment, sewn up the back and at the wrists; the hair, and the cavity of the mouth were examined by me and my collaborators before and after the séances. Eva was walked backwards to the wicker chair in the dark cabinet; her hands were always held in full sight outside the curtains and the room was always quite well lit during the whole time. I do not merely say: there was no trickery; I say there was no possibility of trickery. Further, I cannot repeat it too often, nearly always the materializations took place under my own eyes, and I have observed their genesis and their whole development.”

Such was the thoroughness of the investigations of Eva C. Yet during the two months that the medium was in London, being examined by the Society for Psychical Research (SPR), only twenty of the thirty-eight séances produced phenomena and those were very weak. Professor Charles Richet said, “They (the SPR) admit that the only possible trickery is regurgitation. But what is meant by that? How can masses of mobile substance, organized as hands, faces, and drawings, be made to emerge from the oesophagus or the stomach? … How, when the medium’s hands are tied and held, could papers be unfolded, put away and made to pass through a veil?” In the November 1954 issue of the Journal of the SPR (Vol. 37, No. 682), Rudolf Lambert published a detailed article on Dr. Geley’s Reports on the Medium Eva C.