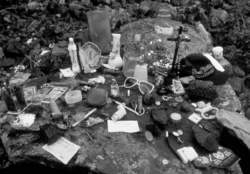 At holy sites around the world, it is traditional for many pilgrims, especially Roman Catholics, to leave behind various objects called “ex-votos.” These symbolize their visit and their reason for their journey. Fortean Picture Library.

Ex-votos (literally, “according to the vow”) are objects left at holy sites that document in some way a petition made by a pilgrim. Among the most simple of ex-votos (also called votives or, in Spanish, milagros) are simple published notices ofthanks to a patron saint for help received, which in Catholic countries may be published in the newspaper as a classified ad. More involved exvotos, those of most interest to anthropologists, will include an illustration of the object of a prayer and some text describing what occurred or what the petitioner wishes to occur. These may be very simple or very elaborate and made out of a wide variety of materials. At healing shrines, exvotos associated with an individual’s illness (such as crutches, canes, or wheelchairs) or representations of body parts are often displayed to show the effectiveness of intercessions to the resident saint.

Today, ex-votos are most identified with Roman Catholicism, but they have been and continue to be used in a variety of religious traditions. Found in ancient religious sites, ex-votos have been a significant means of discerning the exact purposes to which worship at the site was directed. The ex-voto is activated after its construction by leaving it at the holy site and/or close to a representation or relic of the saint/deity to whom one is making a request.

Among the most famous of ex-votos are those painted on pieces of tin that may be seen as shrines throughout Latin America. These usually picture events of a healing along with words of thanks.

Feedback
Flashcards & Bookmarks ?
Please log in or register to use Flashcards and Bookmarks. You can also log in with
Flashcards ?
My bookmarks ?
+ Add current page to bookmarks
References in periodicals archive ?
More important still is the fact that while there is plenty in the exhibition about the supposed influence of the Virgin and Saints on the daily lives of believers, well illustrated by the ex-voto panels (Fig.
Private devotion: religious piety in renaissance Italy was as personal as it was public
A serie e composta, como apontado na introducao deste artigo, por 23 fotografias em preto e branco de tres modelos negros: uma mulher, um homem e uma crianca, alem de imagens de ex-votos. Atraves de uma poetica formal baseada no uso dramatico da luz e a fragmentacao dos modelos, a artista traz questoes importantes a sociedade brasileira.
Black Skin: the poetics of light/Pele Preta: a poetica da luz
devotion are the ex-votos brought to Our Lady of Chiquinquira, the
(The) breastfeeding God
attends to the ways iconographical representations (e.g., paintings, films, and plays) and cultic enactments (e.g., ex-voto offerings, liturgical practices, and patronage associations) interact with written hagiography to construct the life of a saint.
Saints Alive: Word, Image, and Enactment in the Lives of the Saints
"Everyday Miracles: Medical Imagery in Ex-Votos" explores the relationship between faith and healing as expressed in the personal devotional paintings from Italy and Mexico.
Do you believe in miracles?
Gulbenkian Foundation), Ex-Votos (2003, poetry), A Cabeca de Salome
Terracotta
The author looks at literary evidence (chapter one) as well as providing her thoughts on deposits of ex-votos (chapter three) and domestic cults (chapter four).
Women's Religious Activity in the Roman Republic
Our southern neighbor, Mexico, also has rich creative traditions, one of which is featured in "Ex-Votos: A Way To Say Thank You" (page 40).
Editor's note
The silver chest was commissioned, perhaps by Piero de' Medici, the patron of the sumptuous tabernacle and oratory that he rebuilt between 1448 and 1451, to house the most precious of gifts and ex-votos donated in homage to the Annunciate Virgin.
Lex Amoris: La legge dell'amore nell'interpretazione di Fra Angelico
Encyclopedia browser ?
Full browser ?
CITE
Site: Follow: Share:
Open / Close