Nuclei with ratios of neutron number N to proton number Z much larger or much smaller than those of nuclei found in nature. Studies of nuclear matter under extreme conditions, in which the nuclei are quite different in some way from those found in nature, are at the forefront of nuclear research. Such extreme conditions include nuclei at high temperature and at high density (several times normal nuclear density), as well as those with larger or smaller N/Z ratios. The N/Z ratio depends on the nature of the attractive nuclear force that binds the protons and neutrons in the nucleus and its competition and complex interplay with the disruptive Coulomb or electrical force that pushes the positively charged protons apart.

A chart of the nuclides is shown in the illustration. The squares are the stable nuclei (Z ≤ 83) and the very long-lived nuclei (with half-lives of the order of 109 years or more) found in nature. The first jagged lines to either side are the limits of the presently observed nuclei; very little is known about those at the edges. The light, stable nuclei (such as 4He) have Z = N, reflecting the preference of the nuclear forces for N = Z symmetry, but as Z increases, the strength of the Coulomb force demands more neutrons than protons to make a particular element stable, and N &ap; 1.6 Z for the heaviest long-lived nuclei (such as 238U). For Z > 92, the Coulomb force causes most nuclei to spontaneously fission. See Nuclear fission

Stable nuclei lie in the so-called valley of beta stability. As the N/Z ratio decreases (proton-rich nuclei) or increases (neutron-rich nuclei) compared to that of the stable isotopes, there is, respectively, energy for a proton or neutron in the nucleus to undergo beta (ß +, ß -) decay to move the nucleus back toward stability. Most knowledge of nuclear structure and decay has been gained from nuclei in or near the valley of beta stability. See Radioactivity

The spherical shell model was developed to explain the so-called spherical magic numbers for protons and neutrons, which give nuclei with these numbers a very stable structure and spherical shape. Spherical magic Z and N of 2, 8, 20, 28, 50, 82, and 126, and the weaker magic Z and N at 40, are shown in the illustration as horizontal and vertical lines. The nuclear shell model resembles the atomic shell model, where the noble gases (helium, neon, argon, and so forth) have filled shells and then there is a gap in the binding energy to the next electron shell (or orbit). A major question concerns what happens to these spherical magic proton and neutron gaps (orbits) in exotic nuclei. See Nuclear structure

Another major question concerns the decay modes whereby a nucleus rids itself of excess energy and returns to the stable forms of nuclear matter. As N/Z decreases or increases from the stable values, a point is reached for a given Z where, if one more neutron is pulled out, one proton becomes unbound (an isotope of that element cannot exist with that number of neutrons), or, if one more neutron is added, that neutron is not bound to that nucleus. These limits define, respectively, the proton and neutron drip-lines (the jagged lines furthest from the valley of stability in the illustration).

Answers to the above questions give significant insights into the structure and decay modes of nuclear matter that make it possible to test and extend theoretical models of the nucleus and the understanding of the nature of both the strong and weak nuclear forces. These insights could not be gained by studies of nuclei in and near the valley of stability.

These insights include the discovery of nuclear shape coexistence. Competing bands of levels occur in one nucleus, which overlap in energy but are quite separate in their decays because they are built on quite different coexisting nuclear shapes. Shape coexistence is now known to be important in many nuclei throughout the periodic table.

Exotic nuclei exhibit decay modes not seen near stability, such as proton radioactivity and beta-delayed particle emission. (After beta decay, the highly excited nucleus can emit one or more particles, such as one or two protons, an alpha particle, or one or two neutrons.) 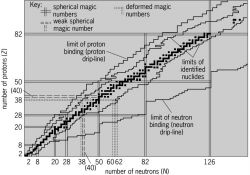 Feedback
Flashcards & Bookmarks ?
Please log in or register to use Flashcards and Bookmarks. You can also log in with
Flashcards ?
My bookmarks ?
+ Add current page to bookmarks
Mentioned in ?
References in periodicals archive ?
Recently, many works have been presented to describe the shell structure properties of exotic nuclei based on the closed shell nuclei properties.
The Calculation of Single-Nucleon Energies of Nuclei by Considering Two-Body Effective Interaction, n(k, [rho]), and a Hartree-Fock Inspired Scheme
Theorists would probably have to propose some kind of interneutron force to explain the exotic nuclei, he says.
Four-neutron nucleus detected: tetraneutron's possible existence defies expectations
International Symposium on Exotic Nuclei (2012: Vladivostok, Russia) Edited by Yu E.
Exotic Nuclei; proceedings
Practitioners recount the course of the sibling sciences since then, discussing such matters as symmetries and dynamical symmetries in nuclei, chiral symmetry in subatomic physics, exotic nuclei far from the stability line, large underground detectors for proton decay and neutrino physics, and lattice gauge theory and the origin of mass.
100 years of subatomic physics
A thousand times more sensitive than any previous detector built, and with an unparalleled level of sensitivity to electromagnetic radiation, AGATA will, at final set up, be able to observe the structure and interior of these rare and exotic nuclei by measuring the gamma rays they emit as they decay.
Gamma ray camera to shed light on birth and evolution of stars
Instead, he is most impressed by the technique's potential to pin down the characteristics of other exotic nuclei that may exist in neutron stars.
Atom Sheds Light on Neutron Stars
Some however, report on experimental studies of exotic nuclei that are now being conducted in several laboratories and new facilities with high-intensity beams that are just completed.
Nuclear structure far from stability; new physics and new technology; proceedings
Exotic nuclei. Moscow University Press, Moscow, 2002.
On the upper limit (heaviest element) in the periodic table of elements, and the periodic table of anti-substances
Geng, "Relativistic continuum Hartree Bogoliubov theory for ground-state properties of exotic nuclei," Progress in Particle and Nuclear Physics, vol.
Mirror Nuclei of [sup.17]O and [sup.17]F in Relativistic and Nonrelativistic Shell Model
Studying these exotic nuclei, described in the May 9 Nature, could allow physicists to better understand subatomic structure and to find new particles and forces.
Atom's core gets pear-shaped: tapering asymmetry of some nuclei confirms predictions