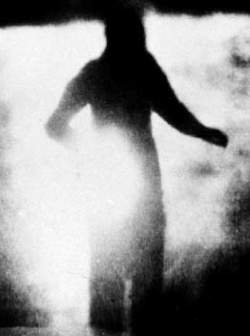 Famous photograph of an extraterrestrial emerging from a UFO, taken by Howard Menger in the 1950s. Courtesy Fortean Picture Library.

In Mysteries of Mind Space & Time; the Unexplained: Reach for the Stars (H. S. Stuttman, 1992), Ron Hyams wrote, “Some biologists believe that intelligence confers such advantages that evolutionary pressures will always tend to promote the development of intelligent species—and that an intelligent species is likely to develop a technology that will enable it to reach out and make contact with beings on other planets.” But theorists have raised the question: Even if it could be assumed that there is intelligent life on other planets, how long might such civilizations endure? Hyams continues, “It would be reasonable to suppose that each civilization lasts for a very short time only … As intelligence is unlikely to reach an advanced stage on two planets at the same time, it could be argued that we are not likely to encounter another civilization at the brief moment of its full flowering … technologically skilled civilizations from different planets may never meet.”

Why, then, is belief in extraterrestrial life so widespread? In 1947, the first sightings were recorded of what became known as “flying saucers,” or UFOs (unidentified flying objects). On June 24, 1947, Kenneth Arnold of Boise, Idaho, alerted the world when he observed nine shining disks flying in formation across the peaks of the Cascade Mountains in Washington State. Arnold was a private pilot, at the time searching for the wreckage of a downed commercial airplane. In talking to reporters, Arnold mentioned that the disks looked “like a saucer skipping across water,” and the term “flying saucer” was born.

Yet UFO sightings have been a part of all recorded history. Shortly before discovering the New World, Christopher Columbus sighted a distant glimmering light in the sky that vanished then reappeared a number of times and over several nights. He and his crew witnessed the event. During the reign of Charlemagne (742–814), several people from Earth were said to have been taken away by beings from space, and later returned. They were apparently abducted to be shown how the space people lived. On their return, however, their fellow humans viewed them as sorcerers and put them to death. A sixteenth century woodcut shows a sky filled with strange dark balls over the city of Basel, Switzerland in August 1566. Similar objects had been seen in the sky over Nürnberg four years earlier. The Bible mentions Ezekiel’s encounter with four “living creatures,” which were described as having identical shining wheels that accompanied them when they rose from the ground. They could move in any direction without turning. NASA space engineer Josef F. Blumrich researched various interpretations of this Ezekiel encounter, feeling he would be able to refute them, only to end up a convert. He went on to design a spacecraft such as might have been encountered by Ezekiel.

Sightings and even photographs (well-investigated, not just obviously fake), movies, and videos have been obtained of these apparently extraterrestrial vehicles. No amount of dismissal by “scientists” equating the sightings with weather balloons, the planet Venus, automobile headlights, swamp gas, and other implausible explanations can deter those who actually see them. And they have been seen by people from all walks of life, from around the world.

One theory holds that the UFOs come not from outer space but from “inner space,” another dimension. Certainly some of the sightings would seem to support this view, where UFOs have seemingly suddenly materialized or dematerialized. There are certain areas of the United States, and indeed of the world, that are termed “doorways,” where such appearances and disappearances have taken place more or less regularly.

Some of the people who channel claim that the entity they are channeling is from another planet or far distant galaxy. Darryl Anka’s “Bashar” says he is from the planet Essassani, five hundred light years away. Jessica Lansing channeled “Michael,” who said he was “of the mid-causal plane” and made up of a thousand fragments of an entity like himself. Jach Pursel’s “Lazaris” says that he has never been in human form; he is a “group form” living in another dimension.

The Aetherius Society in Britain originated in London in May, 1954, and believes that through its leader, George King, its members are in communication with advanced beings from outer space. These beings, the members claim, visit Earth in huge spaceships and watch over all of Earth’s inhabitants, fearful that we will destroy ourselves. These advanced mystics are supposed to live on Venus, Mars, or Neptune. George King declares that the different spacecraft are sent to Earth on the direct orders of the Interplanetary Parliament.

Feedback
Flashcards & Bookmarks ?
Please log in or register to use Flashcards and Bookmarks. You can also log in with
Flashcards ?
My bookmarks ?
+ Add current page to bookmarks
Mentioned in ?
References in periodicals archive ?
The Fermi paradox, named after physicist Enrico Fermi (1901-1954), is the apparent contradiction between the lack of evidence for the existence of extraterrestrials and the very high statistical probability of their existence.
For proof of alien visitations, visit Bolivia's Puma Punku
The Vatican embraces the possibility of extraterrestrials.
Galaxy Press Asks Will It Really be a Battlefield Earth?
What are we to make of the fact that the esteemed German philosopher Immanuel Kant repeatedly wrote about about alien intelligence, and, in fact, seriously imagined the existence of extraterrestrial life in a way that deeply underpinned his entire philosophy?
Szendy, Peter. Kant in the Land of Extraterrestrials: Cosmopolitical Philosofictions
The results indicate that, as a species, humanity is still not ready for trying to actively contact a supposed extraterrestrial civilization, since people lack knowledge and preparation.
Are we ready for making contact with extraterrestrial intelligence?
O'M.'s stimulating, nonpolemical argument invites further theological consideration of the extraterrestrial hypothesis and proves that Aquinas inspires venturesome wisdom.
Vast Universe: Extraterrestrials and Christian Revelation
In this essay I use McLuhan's claim that "The Medium Is the Message" to apply it to a trope of the extraterrestrial as used in science fiction writing and cinema in general, and by Walter Tevis in his novel The Man Who Fell to Earth and by Nick Roeg and his screenwriter Paul Mayersberg in their 1976 film adaptation of the Tevis novelistic source in particular.
Pop star is the medium is the message: The Man Who Fell to Earth
LONDON, April 26 -- British astrophysicist Stephen Hawking says aliens are out there, but it could be too dangerous for humans to interact with extraterrestrial life.
Stay home ET. UK scientist: Aliens may pose risks
This could also explain the absence of extraterrestrials: despite the seeming vastness of the galaxy, perhaps exponential expansion is also unsustainable on a galactic scale.
Where have all the aliens gone? The problem of sustainability may explain the absence of extraterrestrials
Egypt: An Extraterrestrial and Time Traveler Experiment
Egypt: An Extraterrestrial and Time Traveler Experiment
One exception to the general separation of Earth and sky involved the possibility that angels, extraterrestrials, or other beings from the celestial realm could journey to Earth.
The inner meaning of outer space: human nature and the celestial realm
Some think that the Bible includes examples of alien life, but Consolmagno disagrees that the "other sheep" Jesus refers to are extraterrestrials.
To infinity & beyond!
He draws on the work of respected astronomers, physicists, chemists, and biologists who have speculated about extraterrestrial civilizations for over four centuries.
Civilized life in the universe; scientists on intelligent extraterrestrials