(redirected from F.P. Yockey)
The following article is from Conspiracies and Secret Societies. It is a summary of a conspiracy theory, not a statement of fact. 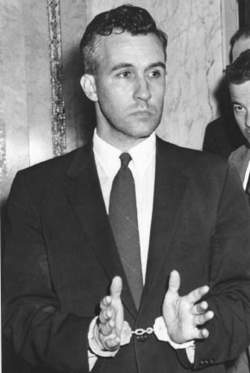 Francis Parker Yockey is shown here under arrest for using fifteen aliases in a passport operation. He is best remembered for Imperium, a book that advocated placing all of Europe under a Nazi regime.

A strange man right out of the Twilight Zone devoted his life to an attempt to reverse the result of World War II and declare the Third Reich the winner.

If Francis Parker Yockey had not committed suicide in 1960 when the FBI finally caught up with him, he would be pleased at the violent and chaotic manner in which world events have progressed since 9/11. He would have delighted in the collapse of the World Trade Center and rejoiced that Islamic extremists had been the perpetrators of the terrorist act. Yockey had dedicated his life to reversing the outcome of World War II, a mission that he thought could be achieved by 2050. He provided covert assistance to organized Muslim opposition to the West and hoped that terrorists to whom surrender was impossible would begin attacking American cities. He envisioned a world in which America’s global influence would be replaced by a European superstate built according to the precepts of Hitler’s Third Reich and ruled by elitists who had replaced Christianity with the occult Hermetic disciplines.

Little is known about this mysterious individual, who inhabited the farthest edges of the shadowy fringe. Just as devotees of weird tales embrace the mystery of H. P Lovecraft’s Necronomicon, disciples of fascism and Satanism are devoted to Yockey’s underground text Imperium. Of course, followers of Lovecraft’s work understand that the world of Ancient Ones that he created was fiction; admirers of Yockey’s work dedicate themselves to fulfilling his vision of European unity under a Nazi regime. Yockey brushes aside the Nazi defeat in World War II as a temporary setback in the march toward the ultimate goal of the exclusion of America in European affairs and a fascist revolution in America itself. Imperium was written under the pseudonym of “Ulick Varange” (“Ulick,”supposedly a Danish Irish name; “Varange,” a reference to the Norsemen) and self-published in 1948 by Yockey in a limited edition of two hundred copies. Reprints of the work circulate today among neo-Nazi and far-right groups, who regard Yockey’s thoughts and theories with the same reverence that earlier like-minded readers held toward Hitler’s Mein Kampf.

It was not until some years after Yockey’s death that radical-right publisher Willis Carto published a paperback edition of Imperium and the book began to reach a wide readership among neo-Nazi and neo-fascist groups. The Italian Hermetic ideologue Julius Evola had praised Yockey’s work, and Imperium was in harmony with the Swiss-based New European Order and its beliefs in the myths of Aryan origins in the hyperborean north and in Atlantis.

Born in Chicago in 1917 to a family of the professional classes and of German, Irish, and French Canadian ancestry, Yockey was reared Roman Catholic, but he eventually found himself attracted to a kind of theosophical Nietzscheanism as he involved himself with radical-right organizations in the 1930s. Yockey was attracted to the German American Bund, but he also became intrigued with the Stalinists, the Trotskyites, the semifascist followers of Father Coughlin—any group, it seems, that was against capitalism and that understood the international threat of the Jews.

Some researchers are certain that Yockey was part of a German American espionage network and that he aided the infiltration of Nazi saboteurs into the United States. During World War II he received a commission in the U.S. Army. He then briefly deserted but, after a few weeks, returned to duty and satisfied the army that he had suffered a mental breakdown. He obtained a medical discharge without any suspicion that he may have been aiding Nazi spies and saboteurs during his time away from base.

Before the war Yockey pursued an academic career at several universities, completed a law degree at Notre Dame, and was qualified to practice. He had also attended Georgetown University’s School of Foreign Service as an undergraduate. With these qualifications, he obtained a job after the war with the war crimes tribunal in Germany. He was discharged for his tendency to side with the Nazi officials he was supposed to be prosecuting. Later Yockey landed a job with the American Red Cross and returned to Germany. He soon deserted his post and was sent back to the United States. Yockey had simply used both positions as a means of getting the U.S. government to finance his trips to Germany to meet with the growing pan-European fascist network.

Conspiracy theorists speculate that Yockey spent the 1950s accumulating a bewildering array of identities as he traveled literally around the world, doing whatever he could to aid the fascist cause. It is likely that he was involved with Odessa, the international network of postwar Nazis and fascists. Some suggest that Yockey spent a substantial amount of time behind the iron curtain before he returned briefly to the United States to work as a speechwriter for Senator Joseph McCarthy. It is known that Yockey spent time in New Orleans writing propaganda for use in Latin America, and a number of conspiracy researchers insist that he knew Lee Harvey Oswald at that time.

In 1960 the FBI confronted Yockey in Oakland, California, when Yockey’s numerous identities and passports had raised a number of red flags. Before federal agents could question him, Yockey tried to run away, injuring an agent in the process. Yockey died by self-administered potassium cyanide on June 17, 1960.