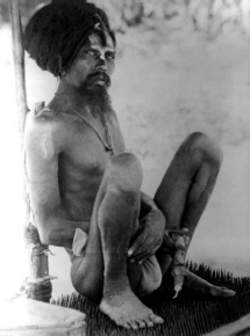 A fakir in India sits on a bed of nails to demonstrate the power of his religious devotion. Getty Images.

Fakirs are holy men in India and neighboring countries who have become known either from their performance of extraordinary feats accomplished from their years of practicing yoga, or their performance of miraculous events, often as part of a stage performance. In the nineteenth century, numerous accounts of the fakirs were recorded by Western visitors to India, perhaps the most well known being the so-called Indian rope trick, in which a rope is raised into the air without visible means of support and a young boy climbs it, only to disappear when he reaches the top. Among the most popular of books informing Westerners of the fakirs was Louis Jacolliot’s Occult Science in India and among the Ancients: With an Account of Their Mystic Initiations and the History of Spiritism, published in the 1880s. Fakirs are mostly either itinerant Sufis (Muslim mystics) or Hindu saDHUS (those who have left the larger society to pursue a religious life). Fakir is an Arabic term meaning poor man.

A number of fakirs practice hatha yoga for many years and attain considerable control over their involuntary body functions. They are able, through moving into various trancelike states, to suppress different physical responses and even slow their rate of breathing. Notable among their abilities are reclining on a bed of nails without apparent pain or permanent scarring and being buried alive for extended periods of time.

Other fakirs perform a spectrum of magical tricks, from levitating assistants and walking on hot coals to eating fire, materializing objects out of thin air, or sticking their hands in boiling oil. Most of these tricks are done through various techniques of simple stage magic.

During the last half of the twentieth century, B. Premanand, the head of the Indian Committee for the Scientific Investigation of Claims of the Paranormal, has made the exposing of the fakirs a personal crusade throughout the country. While what they do might be quite acceptable as a magical performance, Premanand has been most insistent that it becomes illegitimate when used to convince people of the existence of the supernatural. Fakirs operate as a stage magicians’ union, which passes the knowledge of how to produce the various phenomena from generation to generation. By his knowledge of stage magic, Premanand has been able to reproduce all of the tricks of fakirs, and he regularly travels the countryside showing people how it is done. Premanand has especially targeted the famous guru Satya Sai Baba, who is well known in India as a miracle worker and regularly “materializes” sacred ash for his followers.

Today, the actions performed by the fakirs are generally considered either accomplishment derived from disciplining the body with yoga and related techniques or simple stage magic.

Feedback
Flashcards & Bookmarks ?
Please log in or register to use Flashcards and Bookmarks. You can also log in with
Flashcards ?
My bookmarks ?
+ Add current page to bookmarks
Mentioned in ?
References in classic literature ?
Atkinson was leaning against a tree with a listless face; Quinton's wife was still at her window; the doctor had gone strolling round the end of the conservatory; they could see his cigar like a will-o'-the-wisp; and the fakir still sat rigid and yet rocking, while the trees above him began to rock and almost to roar.
View in context
"The fakirs of Sufi Inayat were also mischief-making in their lands," - meaning they were preaching collective farming.
Rebel Sufi of the Indus Valley - II
Some 400 performers in variety of events, including Ustad Rahat Fateh Ali Khan , Saen Zahhor, Sheema Kirmani, Papu Saen, Akhtar Chinar Zehri, Zarsanga, Shah Jo Raag Fakirs, Nighat Chaodhry,
17th mystic music sufi festival from Feb 9
And there sure area lot of mad magicians, crafty crones, felonious fairies, ferocious fakirs, and even a vampire or two.
Born to be bad: why dancers can't resist their dark side