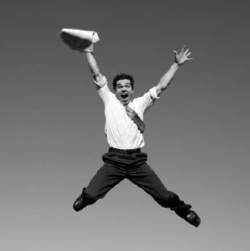 Falling dreams are representations of our waking fears.

Some dream motifs are so common that almost everybody has them on more than one occasion. These motifs include such scenarios as falling dreams, flying dreams, dreams of nakedness in public, and unpreparedness dreams. Such shared dreams arise from experiences and anxieties fundamental to all people.

Falling is one of these shared motifs. Psychologists speculate that fearful falling dreams are rooted in our early experiences as toddlers taking our first steps on two legs. If this hypothesis is correct, then our childhood experiences leave a deep imprint in our brain that is somehow activated in adult life during periods of high anxiety. Some sociobiologists have further speculated that our fear of falling ultimately derives from the experiences of prehistoric ancestors afraid of tumbling out of trees during the night.

Whatever the origin of falling fears, in dreams the processes of the human mind tend to deploy images that symbolically express our hopes and fears. Falling dreams thus often tend to reflect a sense that one has failed or “fallen down” in life. For example, a woman brought up to believe in a traditional sexual ethic may dream of falling after an erotic encounter because she believes that she has become a “fallen woman.” Dreams of falling also occur when one feels completely overwhelmed or out of control, such as periods when one is going through a divorce or the loss of a job.

Falling dreams are not always symbolic. For example, Ann Faraday, author of The Dream Game, recounts an instance of noting that the guardrails on the balcony of her new seventh-story Department were rickety. At the time, she was so preoccupied with the other aspects of moving that she did not fully register the dangerous condition of the railing. That night she dreamed of falling off the balcony, which caused her to pay attention to the poor state of the guardrails the next day. Faraday also notes that the prevalent idea that people who do not wake up before they hit bottom will die is simply a superstition, unsupported by actual dream experiences.

A final perspective on falling dreams focuses on the “jolt” that wakes us from such dreams. According to some traditions of occult lore, our consciousness wanders away from the physical body during dreams. When something happens that causes us to awaken abruptly, our spiritual self “snaps” back into the body. This “rough landing” results in our being jolted into wakefulness and is registered in our dream consciousness as a fall.

Feedback
Flashcards & Bookmarks ?
Please log in or register to use Flashcards and Bookmarks. You can also log in with
Flashcards ?
My bookmarks ?
+ Add current page to bookmarks
TheFreeDictionary presents:
Write what you mean clearly and correctly.
Mentioned in ?
References in periodicals archive ?
Atallah's complex oil on linen painting, Falling Dreams, deals with contemporary issues of war, migration and exploitation.
A nurturing, collaborative environment for artists
Falling dreams Falling in your dreams means that something in your real life is out of your control.
What do the stars have in store for you this holiday?
Falling dreams are a signal that things feel out of control.
Dream on: soaring through the sky? Being chased by bad guys? We tell you what those wacky dreams really mean!
So if my falling dreams of my childhood showed signs of my insecurity, what does
helen legh'S COLUMN UNPLUGGED: Giving birth to a ham sandwich is just part of a good night's sleep
F ALLING: Gypsies say falling dreams indicate that you are unhappy, especially with personal relationships, and want to get out of a situation.
WHAT THE GYPSIES SAY YOUR DREAMS ARE TELLING YOU
Most of us probably think of it more simply, however, as that weird falling dream. There are a number of interesting theories about why we have the falling dream.
Falling Dream