Falun Gong, the Wheel of Law 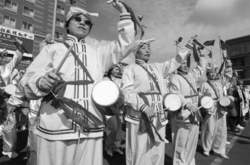 Falun Gong, the Wheel of Law

Li Hongzhi says that his cult Falun Gong battles evil aliens that come to Earth to undermine its spirituality. The Chinese government pronounced the Falun Gong itself to be evil.

Falun Gong means the “Practice of the Wheel of Dharma.” (Dharma is a complex Hindu and Buddhist concept that translates in a broad sense to “law,” especially to the natural order of personal ethics and principles of conduct, equivalent to what is commonly referred to as “religion.”) The founder of the movement, Li Hongzhi, a former Chinese government grain clerk who now lives in the United States, claims to have been born on May 13, the supposed birthday of Siddhartha Gautama, the Buddha, but government records list his birthday as July 7, 1952. Li also claims that Falun Gong, which he founded in 1992, has 100 million members worldwide, 80 million of whom are in China. The Chinese government insists that the number in their country is more like 2 million.

Although Falun Gong incorporates many Buddhist and Taoist concepts and terms, Li insists that it is not a religion and that its exercises and techniques complement all religious expressions. He says that Earth has been quietly invaded by evil extraterrestrials who want to undermine human spirituality by contributing to the rapid expansion of technology. Humankind would be much better off without computers and all other machines that replicate human activity and supplant human productivity.

The movement’s sacred texts, Revolving the Law Wheel and China Falun Gong, were both written by Li. The Falun Gong symbol is a spinning swastika (from the Buddhist and Taoist traditions) surrounded by four smaller spinning swastikas and four twirling yin-yang symbols. Five daily exercises activate the higher abilities of mind, body, and spirit and contribute to an individual’s self-examination and self-knowledge. Through proper and conscientious practice, the student will be able to attain enlightenment and to master many supernatural powers, including levitation, psychokinesis, and telepathy.

For thirteen hours on April 25, 1999, fifteen thousand members of the Falun Gong’s Qigong sect, standing five or six rows deep along more than a mile of the Avenue of Everlasting Peace in central Beijing, protested their negative treatment in the state media and demanded official recognition for their sect and the freedom to publish their texts. The protest, held only six weeks before the tenth anniversary of the arrest of dissidents on Tiananmen Square and the infamous events of June 4, 1989, managed to get the State Council of China to agree to negotiate with the Falun Gong. However, in July 1999, Chinese officials branded the Falun Gong an evil cult, claiming that it had caused the deaths of fifteen hundred of its members. The Chinese government banned the practice of the cult and sent more than fifty thousand adherents to prisons, labor camps, and mental hospitals. The relationship between the cult and the government continues to be uneasy.