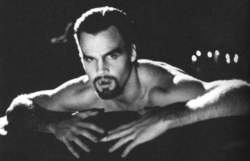 Early in Bram Stoker‘s Dracula (1897), at the time of his first encounter with Dracula, Jonathan Harker sketched his impressions. Besides Dracula’s other prominent physical features, he noted that the vampire’s mouth “was fixed and rather cruel-looking, with peculiarly sharp white teeth; these protruded over the lips …” (chapter 2). Later in that same chapter he reinforced his initial description by referring to Dracula’s “protuberant teeth” and as they conversed he could not take his eyes from the smiling count for, “as his lips ran back over his gums, the long, sharp, canine teeth showed out strangely.” Thus Stoker wedded what has become one of the most identifiable features of the modern vampire to its most popular representative figure.

Like Dracula, the three women in the castle, more recently referred to as the vampire brides, also possessed the extended canines. As one of the women approached him, Harker noted not only her bad breath but felt the hard dents of the sharp teeth on his skin. He could see the moonlight illuminate the teeth of the other two women. Stoker reinforced the importance of the teeth in identifying the vampire during Dracula’s attacks on Lucy Westenra. As her strange illness progressed, the knowledgeable Dr. Abraham Van Helsing called attention to “the little punctures on her throat and the ragged exhausted appearance of their edges” (chapter 10). As the end approached, he noted the transformation overtaking her signaled by her teeth—her canine teeth looked longer and sharper than the rest. After her death they had grown even longer and sharper. Dracula was not the first vampire to have fangs. In describing the first attack on Flora Bannerworth by Varney the Vampyre, author James Malcolm Rymer, (writing in the 1840s, a full half century before Dracula,) noted, “With a plunge he seizes her neck in his fang-like teeth—a gush of blood, and a hideous sucking noise follows.” In examining Flora later, her mother brought a light close by so that “all saw on the side of Flora’s neck a small puncture wound; or, rather two, for there was one a little distance from the other.” Laura, the victim of “Carmilla,” in Sheridan Le Fanu‘s 1872 tale, had a somewhat different experience. She remembered being attacked as a child and feeling two needles plunging into her chest, but upon examination, there were no visible wounds. Later in the story, Carmilla and Laura were speaking to a wandering peddler who noted that Carmilla had the “sharpest tooth—long thin, pointed, like an owl, like a needle.” He offered to cut it off and file it to a dull point so that it would no longer be “the tooth of a fish.” Later in a dream, Laura again had the experience of two needles piercing the skin of her neck. The doctor found a little blue spot at that place on her neck. The daughter of General Spielsdorf reported an experience similar to Laura’s—a pair of needles piercing her throat. It was finally concluded that both had been attacked by a vampire, who would have—as was well known—two long thin and sharp teeth that would leave a distinguishing puncture wound on its victim.

While both Varney and Dracula possessed extended canine teeth, as Martin V. Riccardo has noted, this trait was not yet a permanent feature. When Dracula was brought to the screen in 1922’s Nosferatu, Eine Symphonie des Grauens, Graf Orlock, the Dracula figure, had two rat-like teeth protruding from the front of his mouth, rather than the canines mentioned by Stoker. Then when Bela Lugosi turned Dracula into a household word through his performance in the 1931 film, he did so without any fangs. Nor did he ever have protruding teeth in any of his subsequent performances. Dracula was also portrayed by Lon Chaney, Jr. (Son of Dracula, 1943) and John Carradine (House of Frankenstein, 1944, and House of Dracula, 1945) but neither actor sported fangs. The fangs had appeared twice before Lee, in the 1952 Turkish version of Dracula, which did not receive broad distribution, and a 1957 Roger Corman film Blood of Dracula with a female wolflike vampire. In 1958, in the Hammer Films bloodfest The Horror of Dracula, did Christopher Lee turned to the camera and showed audiences his extended canines. He would repeat this act in subsequent films, and after him many others would do likewise. Thus, while Lugosi (following Hamilton Deane‘s lead) established the image of the vampire dressed in an evening suit and cape, it was Lee who fixed the image of the fanged vampire in popular culture. Since Lee’s portrayal, most (though by no means all) cinematic vampires have shown the required teeth, as did Barnabas Collins in the Dark Shadows television series late in the 1960s.

Once established, fangs became an artistic convention to call attention to the presence of vampires. Fangs commonly appeared on the cover art of vampire novels, quickly identifying those titles not possessing an obvious vampiric name. They were used in a like manner on comic book covers, Dracula dolls, and Halloween greeting cards. A new feature introduced into recent vampire films and novels has been retractable vampire teeth. Vampires would thus appear normal when interacting with humans, and show their fangs only when angry or about to feed. This development seems to have derived from the favorable reaction to the transformation into a werewolf shown in the Oscar-winning American Werewolf in London. Such a dramatic transformation from a normal appearance into a monsterlike figure was graphically portrayed by Grace Jones and her fellow vampires in Vamp (1986) and would be followed in a number of movies where close-up shots of a vampire’s mouth would show the fangs moving into place for a bite. It became a standard element in the many episodes of Buffy the Vampire Slayer and of Angel. The appearance of the extended canine teeth accompanied other changes in facial expressions and signaled the emergence of the darker predatory side of the vampire’s personality. The conventional canine fangs created a problem for the cinematic vampire. Lee’s canine teeth appeared to be used more for ripping flesh than for neatly puncturing the skin and jugular vein. The two holes would be so far apart that the vampire would find it difficult to suck from both holes at the same time. Therefore, it has been common to picture the two holes as being much closer together than the distance between the canine teeth would suggest. This discrepancy, overlooked by most fans, has given feminist interpreters of vampires an opening to find something positive in the male-dominated myth. Penelope Shuttle and Peter Redgrove, for example, suggested that the wounds were not those of a carnivore, but of a viper, a snake. They suggested that the film directors, without consciously knowing what they were doing, were harking back to an ancient myth that associated the beginning of menstruation with a snake’s bite. After being bitten by the snake, the girl became a woman and began menstruating; after being bitten by the vampire, the women tended to become more active and sexual. While the vampire myth has been associated with the particular anxieties of teenage males, possibly it also has something subtle to communicate directly to young females. Twilight author Stephenie Meyer decided to drop the fangs altogether and replaced them with strong piercing teeth, suitable for tearing the flesh rather than puncturing it. They work on the wild animals that are the major food of her vampires.

Feedback
Flashcards & Bookmarks ?
Please log in or register to use Flashcards and Bookmarks. You can also log in with
Flashcards ?
My bookmarks ?
+ Add current page to bookmarks
Mentioned in ?
References in classic literature ?
His long fighting fangs buried themselves in the white throat.
And with Taug's example before them the other bulls charged, burying Sheeta beneath rending fangs and filling all the forest with the wild din of their battle cries.
He turned and saw her with the balu hugged close to her hairy breast, and put out his hands to take the little one, expecting that Teeka would bare her fangs and spring upon him; but instead she placed the balu in his arms, and coming nearer, licked his frightful wounds.
View in context
Fang, throwing the paper on one side, 'what's this fellow charged with?'
'Now,' said Fang, 'what's the charge against this boy?
Fang sat silent for some minutes, and then, turning round to the prosecutor, said in a towering passion.
'Oh, he won't speak out, won't he?' said Fang. 'Very well, very well.
'Stand away, officer,' cried Fang; 'let him, if he likes.'
'I knew he was shamming,' said Fang, as if this were incontestable proof of the fact.
Fang. 'He stands committed for three months--hard labour of course.
Fang was consequently not a little indignant to see an unbidden guest enter in such irreverent disorder.
'Why didn't you come here before?' said Fang, after a pause.
View in context