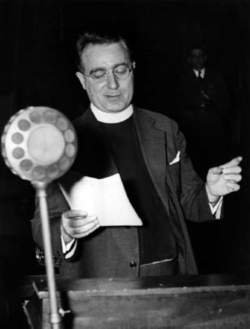 Father Charles Coughlin began spouting anti-Semitic comments on the radio in the 1930s.

The famous “radio priest” Father Coughlin, pastor of the Shrine of the Little Flower, became one of the most virulent anti-Semites of the 1930s.

Born in Hamilton, Ontario, on October 25, 1891, Charles Coughlin was ordained a Catholic priest in 1916 and became the pastor of the Shrine of the Little Flower in Royal Oak, Michigan, in 1926. Coughlin accepted the role of a “radio priest” in 1930 and slowly gained a following until shortly before the presidential election in 1932. On the CBS network Father Coughlin railed against Herbert Hoover and became an ardent supporter of Franklin D. Roosevelt. Coughlin became the voice of the common man when he vented his frustrations over the machinations of bankers and the uneven distribution of wealth. Far from being a socialist or Communist sympathizer, however, the priest used his electronic pulpit to blast liberalism and socialism in the government.

Because he had become such a vocal and enthusiastic endorser of the candidacy of Roosevelt, many among Father Coughlin’s radio constituency expected that the outspoken priest would receive a high post in the new administration. Although he may not have admitted it openly, Coughlin harbored such expectations himself. He confided to certain friends that if Roosevelt should so reward him, he would quit the church and become a positive force within the government. When the rumored post did not materialize, Coughlin became openly disgruntled. By 1937 his attacks on Roosevelt had grown so virulent that he received a rebuke from Pope Pius XI.

Dropped by CBS, Father Coughlin was certain that NBC would welcome him and his radio parish of millions. Unwilling to rile the Roosevelt administration, NBC informed Coughlin that they had a policy of not accepting commercial religious broadcasting. Incensed, the volatile cleric used WOR New York and WJR Detroit as his flagship stations and then, with the thousands of dollars of voluntary contributions from his radio audience, bought time on individual stations throughout the United States.

Coughlin developed a magazine called Social Injustice to supplement in print his rants over the airwaves. He continued to fulminate against the Roosevelt administration, but his invective now included Jews. To the horror of many of his steadfast listeners, he became perhaps the foremost preacher of anti-Semitism in the nation. He was an embarrassment to Catholics, and prominent leaders within the church fomented a movement to remove him from the airwaves. In l942 Social Injustice was banned from the mail by enforcement of the Espionage Act invoked during World War II.

In that same year, yielding to pressure from both the secular and religious establishments, Coughlin left his bully pulpit on the radio and returned to the Shrine of the Little Flower. He remained active as pastor until 1966. He died on October 27, 1979, at the age of eighty-eight.

Feedback
Flashcards & Bookmarks ?
Please log in or register to use Flashcards and Bookmarks. You can also log in with
Flashcards ?
My bookmarks ?
+ Add current page to bookmarks
References in periodicals archive ?
Father Charles Coughlin, Detroit's "Radio Priest," and William Pelley of Minneapolis, openly called for Jews to be driven from positions of responsibility, if not from the country itself.
How Jewish Gangsters Fought the Nazis
There is the much-idolized isolationist aviator Charles Lindbergh, who blamed FDR, Britain and the Jews for advocating entry into the war; the anti-Semitic industrialist Henry Ford, whose European factories churned out trucks for the German Army; the German agent George Sylvester Viereck, who, with the aid of isolationist or pro-German congressmen, disseminated pro-Nazi propaganda; and the "radio priest," Father Charles Coughlin, a role model for broadcast demagogues ever since.
How Hitler Lost America
This group coalesced around Father Charles Coughlin, a Michigan Catholic priest with a weekly broadcast.
Hitler's American Friends: The Third Reich's Supporters in the United States
Or the longstanding practice of lynching black people that compelled Mark Twain to call this country "the United States of Lyncherdom?" Trump's rap has roots in the Salem witch trials, the white knights in the white sheets, the sermons of Father Charles Coughlin and the purges of Senator Joe McCarthy.
Americans have met Trump, and he is them
The limestone art deco Charity Crucifixion Tower was built in 1931 with funds raised by the shrine's longtime pastor and controversial radio personality Father Charles Coughlin, known for his outspoken and divisive political commentary.
National treasures: from the mountains to the prairies, catholic churches stand tall--as widely varied as the people who worship in them
Indeed, one of the nation's most prominent anti-Semites, the "Radio Priest,'' Father Charles Coughlin, was based in Detroit, and his radio "sermons'' were often non-stop anti-Semitic vitriol.
Hank Greenberg: 'The Jewish Babe Ruth'
To understand why Wise and his adherents were so neurotic and passive, and so marked by internalized antisemitism, we might consider that (just to cite a few examples): 1) Leo Frank was lynched in Georgia in 1913; 2) US Army recruits for World War I were given a manual that read "The foreign born, and especially Jews, are more apt to malinger than the native-born"; 3) Henry Ford--a "pillar of American society"--was a raving Jew hater; 4) Father Charles Coughlin, a Michigan Catholic priest with a popular weekly radio broadcast, was fixated on demonizing Jews, and mocked FDR's New Deal as "The Jew Deal."
When silence equaled death
Father Charles Coughlin used to keep the bloodied shirt of a Catholic Mexican martyr draped over a chair in his office.
Of such is the kingdom of God
Examining the ethereal relationships listeners formed with radio characters--the radio democracy exemplified by Roosevelt's fireside chats, the faith in popular radio champions such as Father Charles Coughlin and Dr.
Radio's America: The Great Depression and the Rise of Modern Mass Culture
In the Depression-era United States, this program of social justice and unity inspired "radio priest" Father Charles Coughlin and the followers of his grassroots movement, the Christian Front, to form their own brand of anticommunist social justice.
Twisted social justice: Father Coughlin & the Christian Front
He was widely known, though, by his first name, Charles, i.e., Father Charles Coughlin.
Our gala expanded issue: May/June 2008 on "Israel at Sixty"
He was active in the American Labor Party (ALP) founded by the famous Jewish trade union leader Sidney Hillman, and also participated in campaigns against the anti-Jewish demagogue Father Charles Coughlin and various antisemitic groups.
Mike Marqusee, If I Am Not For Myself: Journal of an Anti-Zionist Jew
Encyclopedia browser ?
Full browser ?
CITE
Site: Follow: Share:
Open / Close