Muhammad was the son of Abdallah ibn Abd al-Muttalib and his wife Amina, both of the Hashim clan of the dominant Kuraish (Quraysh)
..... Click the link for more information.  by his first wife, Khadija. Fatima was the wife of AliAli
(Ali ibn Abu Talib), 598?–661, 4th caliph (656–61). The debate over his right to the caliphate caused a major split in Islam into Sunni and Shiite branches, and he is regarded by the Shiites as the first Imam, or leader: Shiite derives from the phrase
..... Click the link for more information. , the mother of Hasan and Husein, and reputedly the ancestress of the Fatimids. She is revered by all branches of the Islamic faith and is the subject of many mysteries and legends.

(fä`tēmə), hamlet, W central Portugal, in Beira Litoral. At the nearby Cova da Iria is the national shrine of Our Lady of the Rosary of Fátima. This became a great Roman Catholic center of pilgrimage after the six reported apparitions of the Virgin Mary to three shepherd children, May 13–Oct. 13, 1917. An impressive basilica was begun in 1928 and consecrated in 1953, and the Church of the Holy Trinity, one of the largest churches in the world, was consecrated in 2007. Two of the children, siblings Francisco Marto (1908–19) and Jacinta Marto (1910–20), were canonized in 2017 by Pope Francis; their cousin Lúcia de Jesus dos Santos (1907–2005) ultimately became a Carmelite nun.
The Columbia Electronic Encyclopedia™ Copyright © 2013, Columbia University Press. Licensed from Columbia University Press. All rights reserved. www.cc.columbia.edu/cu/cup/ 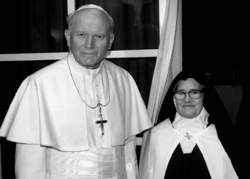 Pope John Paul II visits Lucia Dos Santos in 1991. She was a Carmelite nun who was the last survivor of three children who saw visions of an angel and of the Virgin Mary in 1916 and 1917. AFP/Getty Images.

In 1917 Fatima, Portugal, was the site of what became the most heralded apparition of the Virgin Mary in the twentieth century. The apparitions were initiated in 1916 by several visits by an angel to three shepherd children, Lucia Dos Santos, Francisco Marto, and Jacinta Marto. The children—aged nine, eight, and six, respectively—were illiterate at the time.

About a year after the angel’s visits, on May 13, 1917, the children saw what they described as a beautiful young lady dressed in white and shining with light who appeared to them. At this initial encounter, she asked them if they wished to accept their calling, which would entail their suffering in reparation for the sin of people with the aim to convert them. They answered in the affirmative. She then told them to come to the same spot on the thirteenth of every month. At the October apparition, she would reveal her name and purpose.

The lady appeared twice, on June and July 13, and a crowd attended both visitations, word having spread far and wide of the children’s claims. Hostility also grew against the children, and in August the local magistrate, a Freethinker, imprisoned the children so they could not attend. Some 18,000 people showed up at the spot of the promised apparition in their place. The virgin appeared to the children privately after their release.

The crucial events occurred on September and October 13. Some 30,000 joined the three children in September. Around noon the sky darkened, then a globe of light appeared in the eastand headed toward a tree that had been the focal point of the apparitions. Some white flakes began to fall from the sky. The Lady, seen only by the children, said she would work a miracle on her last visit. The light receded into the eastern sky.

The crowd that gathered on the last day numbered between 70,000 and 100,000. It was a cloudy, rainy day. The Lady appeared to the children and delivered her message, then the children saw a ray of light go up from her to where the sun would have been in the sky. Lucia called for the crowd to look at the sun. As she spoke, the clouds parted and a bright, silver disk appeared in the sky. Everyone, believer and skeptic alike, saw it begin to twirl. The twirling sun shooting out lights was visible to people up to thirty miles away.

After about half an hour, the twirling sun was seen to plunge toward the earth, emitting a considerable amount of heat (enough to dry the clothing earlier soaked in the rain). Before the disc hit the ground, it stopped and flew away (a behavior that later prompted those interested in UFOs to compare it with a flying saucer). The next day, newspapers across the country carried the story of what occurred.

Several years after the events, two of the children passed away. They had been told that the Lady would come for them in a short time. The focus for many years was then on Lucia, who lived until 2005. She spent more than seventy years as a Carmelite nun, then passed away just a few weeks before Pope John Paul II, whohad put full papal authority behind the apparitions with a series of activities. He initially visited Fatima (as had Pope Paul VI) and then, in response to the message of Fatima, consecrated Russia to the virgin. On May 13, 2000, he canonized the two deceased visionaries, Francisco and Jacinta.

Pope John Paul II’s interest in Fatima was greatly stimulated by an event that occurred on the anniversary of the first apparition in 1981. In the middle of a crowd, he bent to kiss a picture of the virgin carried by a pious believer. As he did so, a bullet whizzed over his head. Had he not responded to the picture, he would have been killed.

The third part of the message was put in an envelope and sent to the Vatican. It was known that both Pope John XXIII and Paul VI were made privy to the Third Secret and decided not to reveal it. In 2000 John Paul II released the text of the third secret, seemingly doing so before Lucia died, so she could verify its authenticity. Part of the message dealt with an assassination attempt of a “Bishop in white.” Many believed it to be a prophecy of the 1981 attempted assassination of John Paul. The revelation of the secret message noticeably slowed much of the wild speculation that had built up over the preceding years, especially in fringe Marian groups.

The Shiite imams and many Muslim dynasties, including the Idrisids, Fatimids, and the Saadi and Filali sharifs of Morocco, traced their ancestry to Fatima and her husband, Muhammad’s cousin, the caliph Ali.

Feedback
Flashcards & Bookmarks ?
Please log in or register to use Flashcards and Bookmarks. You can also log in with
Flashcards ?
My bookmarks ?
+ Add current page to bookmarks
Mentioned in ?
References in periodicals archive ?
Fatima Jinnah is referred as the Mader-e-Millat or Mother of the Nation for her role in the Freedom Movement.
Madre-e Millat Fatima Jinnah being remembered today
2013 the year Fatima visited the UK where her dolls were a hit
Doll maker projecting Pakistan's soft image through her 'Barbies'
However, instead of being shown love, Fatima is turned into a domestic slave.
Book Review: When Patience Is A Virtue
The 52nd death anniversary of Mader-e-Millat Mohtarma Fatima Jinnah, the sister of Quaid-e-Azam Muhammad Ali Jinnah, is being observed today.
Pakistan Peoples Party is continuation of Fatima Jinnah's struggle: Bilawal
In the midst of all this, in 1916, an angel appeared outside the tiny village of Fatima to shepherd children while they were tending their flock.
The core message of Fatima is repentance and prayer
Fatima Jawad is a multifaceted personality, she works at SIUT as a diabatologist and working with a JIN (Prof.
Speakers pay tributes to Dr. Fatema Jawad for her honesty, integrity and hard work publishing the JPMA
Eleven years older than Shamima was when she left, Fatima was groomed by an ISIS fighter she believed could be her 'prince' and 'rescue her' from her pain.
'How I went from London schoolgirl to ISIS bride - my devastating story in full'; Fatima, lured by an ISIS fighter, was given books justifying the murder of children and beheadings as she arrived in Syria - and the reality of her new life hit hard
Francisco and his sister Jacinta, the youngest of ten siblings , together with their cousin Lucia dos Santos were from Aljustrel near Fatima, Portugal.
Feast day of Saints Jacinta & Francisco
Les toiles de l'artiste sont exposees actuellement au Musee Mohammed VI d'art Moderne et Contemporain dans le cadre de l'exposition [beaucoup moins que]Voyage aux sources de l'art: Chaibia Talal, Fatima Hassan El Farrouj, Radia Bent Lhoucine[beaucoup plus grand que] qui se poursuivra jusqu'au 23 Janvier 2019.
L'oeil de Fatima Hassan El Farrouj
Summary: Mumbai (Maharashtra) [India], Oct 27 (ANI): Good news for all Fatima Sana Shaikh fans!
Here are the qualities Fatima Sana Shaikh wants in her man
IT was a month after her mysterious disappearance when 16-year-old Fatima Hassani called home to speak to her siblings.
FATIMA? WHERE IS; IT'S a mystery which has left a family bereft, and there is barely any information to solve it. What happened to Fatima Hassani? At just 16-years-old the college student ran away from her home in Medlock. Nearly 25 years on, she has not been seen since. Here, reporter Beth Abbit, looks at an unsolved case that Greater Manchester Police's missing persons team are determined to crack