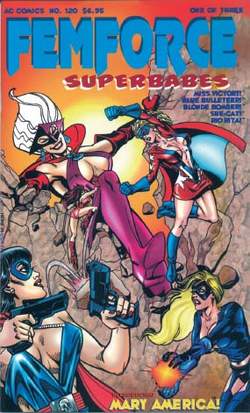 The culmination of many long years spent laboring in the vineyards of comics fandom, mainstream publishing, and independent publishing, Femforce was the brainchild of AC Comics founder Bill Black. Noted by AC writer and editor Mark Heike as being the first successful all-female superhero team, Femforce evolved out of the explosion of inexpensively produced—and for a brief time, highly profitable—black-and-white comics publishing that occurred in the mid-1980s, a period of wild growth for the industry, its publishers, and its direct-market (specialty shop) retailers.

As the market for such titles quickly grew glutted, Black established a unique publishing niche for AC by focusing on a conspicuously un-derrepresented area of the superhero genre: female protagonists, which, thanks to his earlier publishing ventures, Black possessed in abundance. In 1985, the ongoing Femforce series, created largely by utilizing characters from earlier AC comic books, landed on America’s comics racks. The title quickly distinguished itself from most other contemporary superheroic fare by portraying its powerful female leads in an appealingly cheesecake “Good Girl” art style, replete with characterization and humor. The regular series also bucked the era’s prevailing independent comics trend by printing in full color.

Femforce, which quickly became AC’s flagship title, was mainly composed of female characters from the universe of Black’s principal superhero, Captain Paragon. The team, whose membership has fluctuated over the years, was led by the blonde, statuesque Ms. Victory, a patriotic heroine. Victory’s alter ego, Dr. Joan Wayne, was a U.S. government biogeneticist during the 1940s, when she invented a pumped-up vitamin compound known as V-47. This discovery granted her superstrength and the power of flight, as well as giving her perpetual youth while she was in her superheroine guise, thus affording her an excellent disguise. As the years wore on, Wayne aged into an old woman while Victory remained young. Originally known as “Miss Victory,” she adopted the more contemporary “Ms.” honorific as the years went on. Kept strong and youthful by the V-47 compound, Ms. Victory (now Paragon’s wife) can look forward to many more decades of service as one of America’s most stalwart protectors.

Among the rank-and-file members of Femforce are She-Cat, a free spirit whose feline powers originated from an encounter with the evil cat goddess Sekhmet. Savage and noble natures are constantly at war within She-Cat, and the feline metaphor accurately describes both her razor-sharp claws and her well-honed sexuality. Nightveil (a.k.a. Laura Wright, the Blue Bulleteer), an Earth heroine who gained sorcerous abilities on the extradimensional world of Dark Dhagor, is a brooding woman of mystery and beauty. Evolved from a Fox Comics Phantom Lady look-alike of the 1940s, Nightveil derives her mystic powers partly from her arcane Cloak of Darkness, which she struggles to control and use for good purposes, though she realizes that its dark nature may cause her demise. One of the more popular members of the group, Nightveil has headlined several comics of her own.

Silver-tressed Silva Synn has big hair, big brains, and a major sweet tooth; not only can she teleport using subspatial wormholes, she also has the ability to create mentally generated objects—called “synnestrophic constructs”—that remain solid as long as she maintains her concentration. “Too Tall” Tara Fremont, an environmentalist, marine biologist, and latter-day “jungle girl” (though not in the Sheena mold, since she never wears animal skins), uses the enormous wealth of her father (industrialist T. C. Fremont) to protect the planet’s many endangered species from extinction; thanks to a variant of Ms. Victory’s V-47 serum, Fremont has also acquired the power to grow to enormous proportions, a la the 50-Foot Woman of the classic 1950s sci-fi film. Stardust is a pacifist extraterrestrial scientist who hails from the matriarchal world of Rur; her body gathers and concentrates stellar energy, which she can use either as a weapon or as a means of flight. An outsider among humans, “Dusty” continually struggles to understand Earth’s aggressive, conflict-ridden culture. Colt (Valencia Kirk), the diminutive mistress of all manner of weaponry and martial arts, and Rayda (Dyna Morisi), a “human dynamo,” are auxiliary members.

Other characters that have seen action as members or allies of Femforce include Kitten, the female partner of Catman (Holyoke Publishing’s Golden Age hero, revived by Black), as well as such forgotten Golden Age (1938–1954) heroines as Yankee Girl, Miss Masque, and Jetgirl. Femforce’s ranks sometimes swell nearly to Avengers proportions, mainly because of a surfeit of eager and evocatively named villains, including Alizarin Crimson, the Black Shroud, Capricorn, Darkfire, the Fearforce, Fem-Paragon, Lady Luger, the Shimmerer, and Stella Stargaze, as well as ambiguous sometime-allies, who as often as not are foes, such as the antisocial Rad (actually Ms. Victory’s daughter) and the giantess Garganta.

By the late 1980s, as independent comics sales declined, Black converted Femforce into a black-and-white format; the title (along with its several spin-off miniseries and one-shots) remained AC’s only consistently solid seller, both in the direct-sales market and via mail order. By 1990, AC Comics, along with the rest of the industry, was growing steadily. AC’s staff grew as well; Femforce acquired a new writer-artist known only as “The Count,” and artist Brad Gorby also began contributing to the positive fan-reaction the series was receiving. With the further assistance of new associate editor Heike (a major contributing factor as the multi-talented Heike wrote, drew, and inked stories), Black was able to begin releasing Femforce on a monthly schedule.

The year 1990 also saw the launch of two new Femforce-related titles: Good Girl Art Quarterly (which consisted largely of color reprints of Golden Age cheesecake stories, led by a new Femforce tale, also in color), and She-Cat (a black-and-white comic devoted to the feral feline Femforce member). In an effort to improve the quality and consistency of AC’s Femforce line, Black took over all the writing chores on the property, even as the rest of the AC stable continued to expand. Femforce Up Close, a color title that focused on individual Femforce members, debuted in 1992, complementing Jungle Girls, which began its sixteen-issue run in 1988 and presented black-and-white Golden Age reprints as well as new tales of Tara, Femforce’s jungle queen. To address the increased demand for Femforce artwork, Black hired veteran Marvel Comics great Dick Ayers, whose work Black had admired for decades.

While sales of most of the AC Comics line declined during the lean times of the mid-1990s, the up-and-coming “Bad Girl” trend—exemplified by such lucrative characters as Marvel’s Elektra, DC’s Catwoman, Dark Horse’s Barb Wire, and Crusade Comics’ Shi—helped keep Femforce and its spin-offs afloat. All the while, the property somehow managed to hang onto an upbeat, relatively nonviolent image, despite the increased prevalence of “gritty” superhero fare that was becoming almost de rigueur across the comics industry. By 1998, against all odds, Black’s relatively tiny company released the one-hundredth issue of Femforce (only 228 previous comic-book series have attained the this distinguished mark). AC was also reaping considerable profits from Femforce T-shirts, art portfolios, and other paraphernalia bearing the likenesses of AC’s well-upholstered heroines.

As the third millennium unfolds, Femforce’s future remains bright, due in no small part to Black’s nostalgic Golden Age preservationist vision and his continued hands-on involvement with the stories. Still published as an ongoing title today, a summer 2003 story arc titled “Femforce: Superbabes”—spanning issues #120-#122— heated up summer sales. Spearheaded by Heike, who enlisted such artistic luminaries as Joe Staton and Will Meugniot (among others) to contribute stories demonstrating their own creative visions of Femforce-like characters, the three-issue arc proved popular.

Feedback
Flashcards & Bookmarks ?
Please log in or register to use Flashcards and Bookmarks. You can also log in with
Flashcards ?
My bookmarks ?
+ Add current page to bookmarks
Mentioned in ?
References in periodicals archive ?
Jeff Austin worked on AC Comics titles, such as the FemForce.
Look Out for Ripface Invasion's Video Premiere on June 28, 2011