The surface in the electronic wavenumber space of a metal that separates occupied from empty states. Every possible state of an electron in a metal can be specified by the three components of its momentum, or wavenumber. The name derives from the fact that half-integral spin particles, such as electrons, obey Fermi-Dirac statistics and at zero temperature fill all levels up to a maximum energy called the Fermi energy, with the remaining states empty. See Fermi-Dirac statistics

The fact that such a surface exists for any metal, and the first direct experimental determination of a Fermi surface (for copper) in 1957, were central to the development of the theory of metals. A surprise arising from the earliest determined Fermi surfaces was that many of the shapes were close to what would be expected if the electrons interacted only weakly with the crystalline lattice. The long-standing free-electron theory of metals was based upon this assumption, but most physicists regarded it as a serious oversimplification. See Free-electron theory of metals 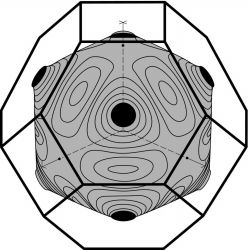 Fermi surface of copper, as determined in 1957; two shapes were found to be consistent with the original data, and the other, slightly more deformed version turned out to be correct

The momentum p of a free electron is related to the wavelength λ of the electronic wave by the equation below,

where &planck; is Planck's constant divided by 2&pgr;. The ratio 2&pgr;/λ, taken as a vector in the direction of the momentum, is called the wavenumber k. If the electron did not interact with the metallic lattice, the energy would not depend upon the direction of k, and all constant-energy surfaces, including the Fermi surface, would be spherical.

The Fermi surface of copper was found to be distorted (see illustration) but was still a recognizable deformation of a sphere. The polyhedron surrounding the Fermi surface in the illustration is called the Brillouin zone. It consists of Bragg-reflection planes, the planes made up of the wavenumbers for which an electron can be diffracted by the periodic crystalline lattice. The square faces, for example, correspond to components of the wavenumber along one coordinate axis equal to 2&pgr;/a, where a is the cube edge for the copper lattice. For copper the electrons interact with the lattice so strongly that when the electron has a wavenumber near to the diffraction condition, its motion and energy are affected and the Fermi surface is correspondingly distorted. The Fermi surfaces of sodium and potassium, which also have one conducting electron per atom, are very close to a sphere. These alkali metals are therefore more nearly free-electron-like. See Brillouin zone

In transition metals there are electrons arising from atomic d levels, in addition to the free electrons, and the corresponding Fermi surfaces are more complex than those of the nearly free-electron metals. However, the Fermi surfaces exist and have been determined experimentally for essentially all elemental metals.

The motion of the electrons in a magnetic field provides the key to experimentally determining the Fermi surface shapes. The simplest method conceptually derives from ultrasonic attenuation. Sound waves of known wavelength pass through the metal and a magnetic field is adjusted, yielding fluctuations in the attenuation as the orbit sizes match the sound wavelength. This measures the diameter of the orbit and Fermi surface. The most precise method uses the de Haas-van Alphen effect, based upon the quantization of the electronic orbits in a magnetic field. Fluctuations in the magnetic susceptibility give a direct measure of the cross-sectional areas of the Fermi surface. See De Haas-van Alphen effect, Skin effect (electricity);, Ultrasonics

The volume ΩF bounded by Fermi surface—that is, the volume per unit cell in quasimomentum space—is determined by the density n of conduction electrons in a metal: 2ΩF/(2πℏ)3 = n. The average size of the Fermi surface for good metals is ~ ℏ/a, where ℏ is Planck’s constant and a is the lattice constant. Usually, n ≈ 1/a3. In most metals, small pockets whose volume is substantially less than (2πℏ)3n/2 are found in addition to a large Fermi surface. The pockets determine many of the quantum properties of metals in a magnetic field, such as the de Haasvan Alphen effect. In semimetals, the volume bounded by the Fermi surface is small in comparison with the size of a unit cell in quasimomentum space.

[′fer·mē ‚sər·fəs]
(solid-state physics)
A constant-energy surface in the space containing the wave vectors of states of members of an assembly of independent fermions, such as electrons in a semiconductor or metal, whose energy is that of the Fermi level.
McGraw-Hill Dictionary of Scientific & Technical Terms, 6E, Copyright © 2003 by The McGraw-Hill Companies, Inc.

Feedback
Flashcards & Bookmarks ?
Please log in or register to use Flashcards and Bookmarks. You can also log in with
Flashcards ?
My bookmarks ?
+ Add current page to bookmarks
Mentioned in ?
References in periodicals archive ?
But the measured Fermi surface (FS) shows only a single distinct hole-like [a.sub.1g]-dominated sheet centered around the [GAMMA] point [24, 25].
Thermopower Enhancement from Engineering the [Na.sub.0.7]Co[O.sub.2] Interacting Fermiology via Fe Doping
The energy level above the Fermi surface (0 eV) is the conduction band, and the energy level below the Fermi surface is the valence band.
Simulation and Experimental Study on Properties of Ag/Sn[O.sub.2] Contact Materials Doped with Different Ratios of Ce
where V(p, p') is the corresponding interaction amplitude; [p.sub.F] and [m.sup.*] = [p.sub.F]/[v.sub.F] are the Fermi momentum and the neutron effective mass, respectively, so that [p.sub.F][m.sup.*]/[[pi].sup.2] is the density of states near the Fermi surface. The angular dependence of the interaction is represented by Cartesian components of the unit vector n = p/p which involves the polar angles on the Fermi surface,
Neutrino Emission from Cooper Pairs at Finite Temperatures
Let us denote by B the neighbourhood of the Fermi surface which is defined by the condition [mathematical expression not reproducible].
Quasi-Particles, Thermodynamic Consistency, and the Gap Equation
The newly predicted type-2 Weyl fermion has a thermodynamic number of states in which it can reside at zero energy -- it has what is called a Fermi surface. Its Fermi surface is exotic, in that it appears along with touching points between electron and hole pockets.
'Material Universe' Yields Surprising New Particle
This is because, as the Fermi surface of the intrinsic BGN communicates to the K-points, the tight-binding method is a suitable technique for the low energy excitations [23].
The effect of bilayer graphene nanoribbon geometry on Schottky-Barrier diode performance
In the general case [E.sub.F] depends on the choice of the crystallographic direction, and the whole spatial set of these levels forms the Fermi surface, which has certain symmetry.
Physical prerequisites for formation of active centers of nanosize particles
This conventional choice for the single-particle spectrum, however, is not very appealing as it leads to a gap at the Fermi surface; the propagator for single-particle states with momenta below the Fermi momentum [k.sub.F] is described in terms of a bound single-particle energy while the corresponding spectrum for the particle states starts at the kinetic energy for the momentum [k.sub.F].
Self-consistent green function method in nuclear matter
In this respect, the concept of Fermi surface loses its meaning due to the broadening produced by pairing of fermions, the so-called Feshbach resonances in ultracold atomic Fermi gases.
Ultracold Fermi and Bose gases and spinless Bose charged sound particles
2 suggest that electrons for n-type GaSb in the vicinity of the Fermi surface will behave as though they have many characteristics of electrons in an indirect semiconductor.
Dependence of electron density on Fermi energy in n-type gallium antimonide
This paper argues from the evidence of studies revealing a loss of control of biochemical function, that the controller is clearly a non-local energy phenomenon and that the various energy types involved exercise control by subtle wavelength-difference behavior exerted on the valency electrons of atoms coordinated at the Fermi surface. We propose an association of short (optic) wavelengths with longer (infraoptic) wavelengths (termed a dual) due to temperature waves of intermediate wavelength.
Contributions of space energy in the search for control systems in biology