[′fe‚rēd ‚swich]
(electricity)
A switch whose contacts are mounted on magnetic blades or reeds sealed into an evacuated tubular glass housing, the contacts being operated by external electromagnets or permanent magnets.
McGraw-Hill Dictionary of Scientific & Technical Terms, 6E, Copyright © 2003 by The McGraw-Hill Companies, Inc.
The following article is from The Great Soviet Encyclopedia (1979). It might be outdated or ideologically biased.

a fast-acting switching device consisting of an electromagnetic relay with hermetically sealed contacts (seeHERMETIC CONTACT). The core of the control winding is made of a hard-magnetic material, such as a ferrite or Vicalloy.

Ferreed switches may have a single series magnetic flux bar (Figure l,a) or two magnetic flux bars in parallel (Figure l,b). When a brief current pulse of positive or negative polarity passes through the control winding of a series ferreed switch, the core is magnetized and the contact reeds are closed by the action of the magnetic field. In order to demagnetize the core and open up the reeds, a current pulse of the opposite polarity is passed through the control winding; in this case the current must not exceed values sufficient to close the reeds a second time as a result of magnetic reversal of the core. Closing the reeds of a parallel ferreed switch is achieved by parallel magnetization of the cores, in which currents of the same magnitude and polarity pass through both control windings. Series magnetization is used to open up the reeds, in which currents of the same magnitude but of opposite polarity pass through the control windings. In this case the opening current has no upper limit. 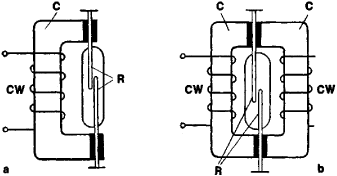 Other types of ferreed switches have several control windings. In some, the sealed reeds are made of a magnetic material having a rectangular hysteresis loop, which obviates the need for a core.

The pull-in current in a ferreed switch is 8–10 amperes, and the time for magnetization or demagnetization ranges from 10 to 300 microseconds. Ferreed switches are used in the switching systems of quasi-electronic central telephone offices and in computer logic devices.