Ferrite memories offer the advantages of very high operating speeds, small size, high reliability, a technologically efficient production method, and economy. Their use as storage elements is based on the property whereby, when magnetized, the cores retain one of two possible stable magnetic states. The states correspond to two values of residual magnetic induction (+ Br and – Br), making the cores suitable for the storage of data written in a binary code. The magnetic state of a ferrite core can be controlled if current pulses of different polarities are sent through a conductor running through the toroidal core (Figure 1) and if the pulses are sufficiently strong to create a magnetic field Hm > Hc, where Hc is the coercive force. Because of the effects of the magnetic-reversal field + Hm, the ferrite core, upon removal of the field, assumes the state + Br; this operation is called write 1. In order to write 0, the current pulse is so selected that it creates the field –Hm; after exposure to the field the ferrite core assumes the state –Br.

As the value of magnetic induction of the core changes from + Br to –Br, a signal, called read 1, is generated in the read circuit. For read 0, the magnetic induction of the ferrite core undergoes no significant change and the signal for read 0 is significantly smaller than the signal for read 1. The read process is accompanied by the erasing of stored information, because during the process the core is always transferred to the state –Br; that is, a 0 is recorded. 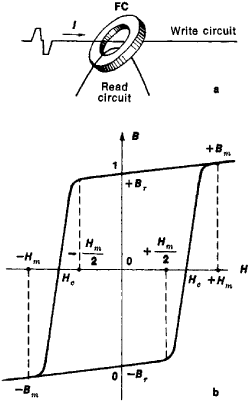 The field Hm can be generated either by a single current pulse flowing through a single write circuit, or by several (usually two) current pulses flowing simultaneously through different circuits. In the latter case each of the pulses generates a field equal to or smaller than Hm/2 and thus, by itself, is not sufficiently strong to change the magnetic state of the ferrite core. The method of generating a magnetic-reversal field of the required strength by the summation, in the same core, of partial magnetic fields generated by two or more current pulses is called the principle of coincident currents. The principle is used in the majority of modern ferrite memory units.

In a ferrite memory unit all cores are assembled in a matrix, or array. A memory unit consists of several (sometimes several tens of) arrays. The arrangement of ferrite cores in the array and the connections of internal (within the array) and external (outside the array) read-write circuits are selected in such a way as to minimize the quantity of electronic control components needed and improve the operational reliability of the unit at rated speed and capacity.

The three most widely used systems for organizing a ferrite memory unit are the three-dimensional array, the two-dimensional array, and a system intermediate between the three- and two-dimensional types. The systems are designated, respectively, by the symbols 3D, 2D, and 2.5D. The choice of system depends on the specific requirements for the computer memory. The 2D system is usually used in high-speed memory units with low capacities; the 2.5D system is used for medium capacity and high speed or for high capacity and medium speed; and the 3D system is used for high capacity and low speed.

Ferrite memory units incorporate hundreds of transistors, thousands of semiconductor diodes, hundreds of integrated circuits, and millions of ferrite cores. Therefore, in designing high-capacity ferrite memory units it is imperative to ensure identical characteristics and parameters for components, particularly ferrite cores, and to achieve low unit costs. The most economical memory units use the 3D system; the 2D system is the least economical. The 2.5D system requires a comparatively low investment and offers high speed and high capacity; it holds much promise for use in modern computers.