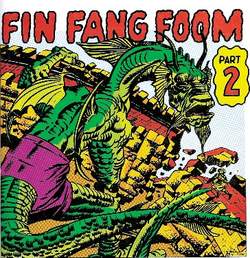 (pop culture)
In early 1961 Marvel Comics writer/editor Stan Lee was bored: “The various monster stories that made up the bulk of our production at that time were beginning to pale for me,” he wrote in his 2002 autobiography Excelsior! One of his last creature creations, a collaboration with artist Jack Kirby published one month before their Fantastic Four series unleashed what Lee would soon call the “Marvel Age of Comics,” would endure throughout Marvel's metamorphosis from monster makers to superhero innovators: Fin Fang Foom, the ultimate monster-supervillain. Strange Tales vol. 1 #89 (1961) takes readers to Red China, where the whispered legend of Fin Fang Foom causes totalitarian strongarms to quake in their boots. When Chan Liuchow, a half-Chinese/ half-American insurgent opposed to the Communist regime, stirs Fin Fang Foom from a subterranean slumber with magic herbs, the reason for this beast's infamy are clear. A sentient, egocentric green dragon of Godzilla proportions (and wearing Comics Code–mandated purple briefs), the “mortals”- hating Fin Fang Foom is coaxed by Chan into a rampage that steamrolls over Red Chinese soldiers. Virtually invulnerable and winged for flight, the acid-spewing, talking dragon cracks a section of the Great Wall of China as a bull-whip before Chan tricks him back into his cavern for another snooze. Over the decades, Fin Fang Foom (or his proxies) has been reanimated to lay waste to the Marvel Universe, with the Fantastic Four and the Hulk mopping up his messes. The dragon has appeared most frequently in the pages of Iron Man, sometimes in connection with the Armored Avenger's Far Eastern foe, the Mandarin. It was revealed in 1991 that Fin Fang Foom was an extraterrestrial explorer shipwrecked on Earth centuries ago, and the dragon has—like many other comics characters—perished, only to return for more malice. His name inspired “FOOM” (“Friends Of Ol' Marvel”) to be added to the Marvel fandom vernacular; during the 1970s FOOM was also the title of a Marvel-published fanzine. Fin Fang Foom, voiced by Neil Ross, was among the rogues' gallery in the animated Iron Man TV series (1994–1996), with a tie-in action figure released. In the 2000s the dragon was sculpted as a collectible mini-bust (in green and red variations), and was featured in the 2005 comic, Marvel Monsters: Fin Fang Four.
The Supervillain Book: The Evil Side of Comics and Hollywood © 2006 Visible Ink Press®. All rights reserved.