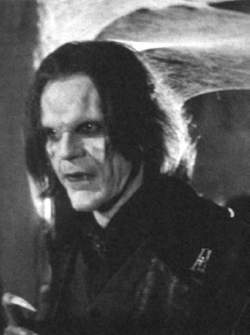 When Jonathan Harker first encountered Dracula early in the novel by Bram Stoker, his “nails were long and fine, and cut to a sharp point.” Above and beyond the role this description had in emphasizing Dracula’s animal-like quality, these nails would become functional later in chapter 21 when they would be used to open a wound in his chest from which he would force Mina Murray to drink. The fact that his nails were noticed at all possibly derived from some of the widely circulated reports of the vampires of eastern Europe. Among the characteristics that vampire hunters looked for in the bodies that they exhumed, in the belief that they were possibly vampires, were nails that appeared to have grown since the burial of the person. Fresh nails, or occasionally no nails at all, were a common item mentioned in reports from Germany, and both northern and southern Slavs. Fingernails have not been emphasized in most post–Dracula vampires. Graf Orlock, the Dracula figure in the 1922 film Nosferatu, Eine Symphonie des Grauens, had extended fingers with elongated nails that added to his rodentlike appearance. However, when Bela Lugosi brought Dracula into a British home, neither hands nor nails appeared abnormal in any way. Occasionally, however, when only the audience could see him, he stuck his hands in front of him like an animal about to pounce on a prey. After Lugosi, only a few vampires that had been altered into a demonic form had clawlike alterations in the hands, though they appear briefly in Bram Stoker’s Dracula in 1992, in a scene in which Coppola pays homage to both Nosferatu and Carl Dreyer’s Vampyr. Dracula, of course, calls upon his sharp finger nails to cut himself in order to allow the blood to flow for Mina to drink.

Fingernails became a characteristic of the vampire to which Anne Rice paid attention in her vampire novels. Louis, Lestat, and their companions develop fingernails with a distinctive glassy appearance that once noticed easily distinguish them from the average human. Thus, they would make an effort to hide their fingernails.

Hong Kong movies often (but by no means always) picture the hopping vampires with long fingernails. These not only become part of a menacing appearance when the vampire lunges at someone with his hands protruding forward but can on occasion become a knife-like weapon for stabbing someone.

Feedback
Flashcards & Bookmarks ?
Please log in or register to use Flashcards and Bookmarks. You can also log in with
Flashcards ?
My bookmarks ?
+ Add current page to bookmarks
Mentioned in ?
References in periodicals archive ?
"When she said she had found a fingernail I just thought well it isn't my fingernails or Jessie's.
Mum demands investigation after girl, 7, finds 'fingernails' in Aldi sardines; Lizzie Record complained to Aldi after the grim find but 'doesn't feel like they are taking it seriously' as the store insists they were fish bones
ClipDifferent launched its Automatic Fingernail Clipper in November 2018.
First-of-Its-Kind Automatic Fingernail Clipper for People of All Abilities by ClipDifferent
The surface of your fingernails and toenails is uneven and ridged.
Why do my nails look funny? DR MIRIAM STOPPARD; Helping to keep you fit and healthy
Infected ingrown fingernails can cause a lot of pain.
How to Treat an Ingrown Fingernail
"At the age of 82, having grown the nails on his left hand for 66 years,&nbsp;Shridhar Chillal (Longest fingernails on a single hand - ever) is finally having them cut," the video said.
Shridhar Chillal Cuts Fingernails After 66 Years
Pune (Maharashtra) [India], July 12 ( ANI ): Shridhar Chillal, the Pune-based man, who holds the Guinness World Record for having the longest fingernails, has cut them after 66 years.
Man with world's longest nails cuts them after 66 years
Eighty-two-year-old Shridhar Chillal will finally be cutting the fingernails on his left h and after 66 years, as reported by Hindustan Times today, July 11.
Indian record holder to cut world's longest fingernails after 66 years
Chillal, 82, has not cut the fingernails on his left hand since 1952.
Man with world's longest fingernails set to cut them after 66 years
'We felt that it was an easy, natural and fun thing to do, which is to paint our fingernails and look good while playing.'
Colors of Italy
One of them later injured the officer's right wrist with her long fingernails. They were charged with physically assaulting an on-duty female police officer and verbally abusing her.
Drunk twin sisters on trial for assaulting Dubai cop
The most common causes of yellow or brown fingernails are the frequent use of nail polish and cigarette smoking.
Problems with my nails
Onychomycosis is a chronic mycotic infection of fingernails and toenails that affects the quality of life in a significant proportion.
Correlation between clinical and mycological diagnosis of onychomycosis