the minimum potential difference between electrodes in a gas required to produce a self-sustained discharge—that is, a discharge that can be sustained without any external ionization sources. A self-sustained discharge is maintained by ionization processes occurring in the gap between the electrodes and at the cathode; the intensity of the processes increases as the potential difference between electrodes increases. The firing potential is equal to the potential difference at which the intensity of ionization processes is sufficient so that each charged particle generates another, similar particle before its “disappearance.” The magnitude of the firing voltage is determined by the nature and the pres-sure/? of the gas, by the material, shape, and surface conditions of the electrodes, and by the interelectrode gap d. In a uniform electric field the firing voltage depends on the total number of gas atoms in the gap between the electrodes—that is, on the product pd (Paschen’s curves for several gases are shown in Figure 1). 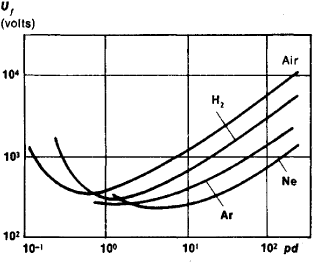 Figure 1. Dependence of the firing voltage Uj on pd for several gases (p is the gas pressure, and p is the distance between the electrodes)

Even insignificant impurities in* the basic gas with which the system is filled have a strong influence on the magnitude of firing voltage; such an influence is also exercised by formation of thin films of foreign atoms on the surface of the cathode. The action of external ionizing factors (for example, radioactive radiation) in the discharge gap or on the electrode surfaces causes a decrease of the firing voltage.

Feedback
Flashcards & Bookmarks ?
Please log in or register to use Flashcards and Bookmarks. You can also log in with
Flashcards ?
My bookmarks ?
+ Add current page to bookmarks
Mentioned in ?
References in periodicals archive ?
Even a brand new electrical box for the M230 has a thin layer of anti-corrosion coating that may interfere with firing voltage. Just wipe these contacts with a clean cloth to ensure a good connection.
Target this PMCS
Because the safeing pin was removed, firing voltage was sent to the station and the pylon jettisoned from the aircraft.
Another day on the flight line