In brickwork, a bond in which each course consists of headers and stretchers laid alternately, each header is centered with respect to the stretcher above and the stretcher below it. See also: Bond
Illustrated Dictionary of Architecture Copyright © 2012, 2002, 1998 by The McGraw-Hill Companies, Inc. All rights reserved 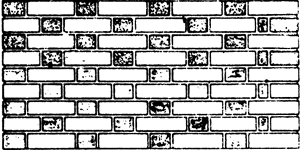 Flemish bond
A brick pattern in which each course consists of headers and stretchers that are laid alternately; each header is centered with respect to the stretchers above and below it.
McGraw-Hill Dictionary of Architecture and Construction. Copyright © 2003 by McGraw-Hill Companies, Inc.

Feedback
Flashcards & Bookmarks ?
Please log in or register to use Flashcards and Bookmarks. You can also log in with
Flashcards ?
My bookmarks ?
+ Add current page to bookmarks
Mentioned in ?
References in periodicals archive ?
The layout is the same as Flemish bond with alternate lengthways and across bricks but they are laid on edge.
No rat-trap bond in the North East; Peter Fall looks at brickwork, bonds and possible problems with ageing walls
However, their uniqueness--marked by Flemish bond facades and paneled windows, not to mention the mere fact that they still exist in between various modern high-rises--gives them a charm of their own.
Villagers fight for landmark status of federal period buildings
"It was constructed in Flemish Bond brickwork with timber cornices at eaves level and big sash windows, so we can say that whoever built Beech House was a very important person or a very wealthy businessman in Atherstone, which in those days was a major coaching station.
Weekend: Buy yourself a piece of history
Notable architectural features on the outside include Flemish bond brick elevations under pitched tiled roofs, projecting gable ends with half timber detailing and a central loggia with ?rst ?oor balcony.
Opposites attract; For Sarah Winning, owning The Grove was the fulfilment of a childhood ambition. Alison Jones discovers more
Flemish bond red brick was used to build the Manor which has been added to over several centuries.
Grade II manor house that ticks every box; Frankton Manor is a wonderful family residence that has just about everything that a growing children might desire. Annie Roberts reports
It is built of mellow Flemish bond brickwork with buff sandstone dressings under a hipped Welsh slate roof and boasts beautiful facades of a stunning symmetrical design and tall sash windows in simple moulded stone architraves.
Time for pastures new; Annie Roberts explores Hockenhull Hall - a Grade II listed property built on a site that dates back to the 12th Century