[¦flü·ə‚dīzd ′bed]
(engineering)
A cushion of air or hot gas blown through the porous bottom slab of a container which can be used to float a powdered material as a means of drying, heating, quenching, or calcining the immersed components.
McGraw-Hill Dictionary of Scientific & Technical Terms, 6E, Copyright © 2003 by The McGraw-Hill Companies, Inc.
The following article is from The Great Soviet Encyclopedia (1979). It might be outdated or ideologically biased.

a state of a layer of granular bulk material in which a flow of gas or liquid (fluidizing agents) causes intense movement of the solid particles with respect to each other. In this state the layer resembles a boiling liquid and acquires some of its properties, and its behavior obeys the laws of hydrostatics. Close contact is achieved between the granular material and the fluidizing agent, which makes the use of fluidized beds efficient in installations requiring interaction of solid and fluid phases, such as in diffusion and catalytic processes. 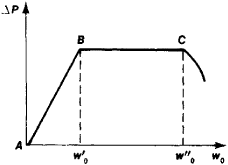 The change of a static bed to a fluidized bed occurs when the velocity of the fluidizing agent is such that the hydrodynamic pressure of the flux P balances the force of gravity G acting on the particles. Further increase of the velocity leads first to an initial expansion of the layer, with constant hydraulic drag, and when P > G the particles begin to separate from the layer. A diagram of the dependence of the pressure drop ΔP on the rate of flow of the fluidizing agent w0 is shown in Figure 1. As long as the bed is static, P increases with increasing w0 (segment AB). After point B, which corresponds to the transition of the bed into the fluidized state, the hydraulic drag of the bed remains unchanged with increasing velocity (segment BC). After point C, which corresponds to the beginning of entrainment of the solid material, the hydraulic drag of the material decreases. The velocities of the fluidizing agent that correspond to points B and C are called the velocities of fluidization (w ’0) and entrainment (w”0) respectively. The ratio W = wH0/w’0 is called the fluidization number. It characterizes the intensity of mixing of particles in the fluidized bed. The greatest mixing intensity corresponds to W = 2, and upon further increase of W the bed becomes anisotropic, with the breakthrough of large gas bubbles and ejection of particles into the space above the surface of the bed. The occurrence of vapor lock is also possible. Because of intense mixing, fluidized beds are characterized by constant temperature over their height and cross section, even if processes involving large heat effects are taking place in them, and by high values of the coefficient of heat transfer to the heat transfer surfaces. 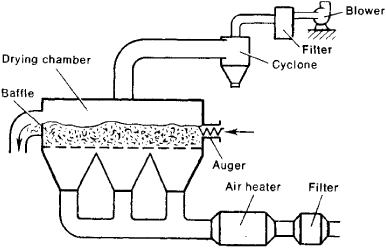 Equipment with fluidized beds is being widely used in industry because of its simplicity of design, intensity of action, and ease of automation and the relatively low hydraulic drag of the bed (independent of the velocity of the fluidizing agent). Fluidized beds are used in performing chemical processes and for adsorption of materials from gases and liquids, heat transfer, and drying of solids, as well as for the mixing, classification, and transport of solid materials.

A graphic demonstration of the principle of operation of equipment using a fluidized bed is fluidized-bed drying (Figure 2). Air passes through a filter and air heater into a drying chamber, where a fluidized bed of material fed by an auger is generated. After dedusting in a cyclone and purification in a filter, the air is released into the atmosphere by a blower. The dried material spills over a baffle and is removed from the unit. A fluidized-bed furnace is another example of equipment of this type.

Feedback
Flashcards & Bookmarks ?
Please log in or register to use Flashcards and Bookmarks. You can also log in with
Flashcards ?
My bookmarks ?
+ Add current page to bookmarks
Mentioned in ?
References in periodicals archive ?
The model developed for nickel-based fluidized bed membrane reactor is compared with palladium-based membrane reactor in terms of methane conversion and hydrogen yield for a given panel of major operating parameters.
Modeling of a Nickel-based Fluidized Bed Membrane Reactor for Steam Methane Reforming Process
"Reliable storage solutions are becoming more and more important in that sector," stresses Ralf Sonnen, expert in Fluidized Bed Process Technology at SCHWING.
SCHWING Technologies Features Fluidized Bed Process Technology at Achema 2018
Several experimental investigations demonstrated the potential and economic value of its application in fluidized bed combustors [8-10].
Simulation of Coal and Biomass Cofiring with Different Particle Density and Diameter in Bubbling Fluidized Bed under [O.sub.2]/C[O.sub.2] Atmospheres
Pellets slow down in the conical section of the cyclone portion as they lose energy and move into the fluidized bed drier.
Managing moisture in online pellet sampling: moisture removal from continuous pellet streams with low mass flows can be challenging. This new dryer design enables significant moisture removal at short residence time
This study investigated the separation process of the 0.5-0.125 mm fraction coal with ultrasonic vibration gas-solid fluidized bed. The composition of products under different experimental conditions was studied by advanced analysis and test methods to evaluate the separation results.
Separation Process of Fine Coals by Ultrasonic Vibration Gas-Solid Fluidized Bed
Located in the PHIVIDEC Industrial Estate in Villanueva, Misamis Oriental, the power plant is a multi-billion peso investment that uses the latest in clean coal technology: the circulating fluidized bed (CFB) boiler technology.
FDC gets ERC nod to operate Mindanao's biggest base load plant
The fluidized bed was simulated using Ansys Fluent 15.0.
The effect of solid particle height on pressure in fluidized bed column for four phase flow
Finally, this new drag coefficient is incorporated into the two-fluid model to simulate the hydrodynamics of Geldart A particles in a bubbling fluidized bed. Therefore, the current work can be considered as a tuning process where subgrid corrections are incorporated based on local grid information if the system was inhomogeneous.
A Bubble-Based Drag Model at the Local-Grid Level for Eulerian Simulation of Bubbling Fluidized Beds. Research Article
It consists of an incineration plant with three fluidized bed incinerators, 45 tpd capacity each, and auxiliary equipment, plus a recycling facility with a capacity of 18 tons per five hours that performs bulky waste shredding, sorting of glass bottles, plastic bottles and cans, and bottom ash recycling.
MHIEC Receives Order to Refurbish Core Equipment of 135 Tons/day Capacity MSW Incineration Plant in Ushiku City, Ibaraki Prefecture
He describes a type of fluidized bed reactor that is based on developing a biofilm on particles that support bacterial growth, which allows the biomass to remain within the reactor and therefore to operate at short hydraulic retention time.
Simultaneous Sulfate Reduction and Metal Precipitation in an Inverse Fluidized Bed Reactor