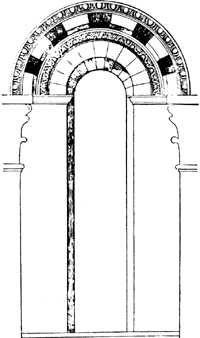 An arch of two orders, 3, each having its carved hood molding

Doric order, 2
1. In Classical architecture, an arrangement of a particular style of column together with the entablature (which it supports) and standardized details, including its base and capital. The Greeks developed the Corinthian order, Doric order, and Ionic order; the Romans added the Composite order and Tuscan order. For each order, the height and spacing of the columns is established in terms of a specified number of diameters of the lower part of the columns; the design of the base and capital is also prescribed. The height of the entablatures is determined by the height of the columns.
2. In masonry, one ring of several around an arch.
McGraw-Hill Dictionary of Architecture and Construction. Copyright © 2003 by McGraw-Hill Companies, Inc.

Feedback
Flashcards & Bookmarks ?
Please log in or register to use Flashcards and Bookmarks. You can also log in with
Flashcards ?
My bookmarks ?
+ Add current page to bookmarks
Mentioned in ?
References in classic literature ?
It was a large, double cottage, with a broad front veranda, whose round, fluted columns supported the sloping roof.
View in context
They make bunches of flowers, from flakes and wires of silver, that counterfeit the delicate creations the frost weaves upon a windowpane; and we were shown a miniature silver temple whose fluted columns, whose Corinthian capitals and rich entablatures, whose spire, statues, bells, and ornate lavishness of sculpture were wrought in polished silver, and with such matchless art that every detail was a fascinating study and the finished edifice a wonder of beauty.
View in context
The fluted column or pillar supports the neck of the harp where a row of grommets and tuning pins hold strings that can be tightened by pitch-controlling pedals.
Grommets and gigs. Brandon realtor wants harp renaissance in Mississippi
A 9th-century fluted column removed from Syracuse cathedral during early-20th-century restoration work reminds us of the continuity of cultural strata, for the present baroque cathedral still incorporates in its walls the even earlier Doric columns of the 6th-century BC temple of Athena.
Multicultural island mix: Julian Treuherz reviews a remarkably ambitious exhibition in Germany that traces the complex course of Sicilian art from prehistory to Garibaldi
And a wall-mounted plasma television also manages to look classical, set in its own specially-made frame, complete with fluted column relief and dentil architraving.
The perfect picture set in stone
In Belle Vue Park, Lowestoft, there is a tall fluted column holding the names of all those from the Royal Naval Patrol Service who gave their lives for the safety of others.
Viewpoints Remember the brave seamen
A fluted column that might take a cabinetmaker 15 to 20 minutes to shape now takes 20 seconds, he says.
Knight Industries plots future growth
"Ionic column: a fluted column with a molded base and a capital composed of four volutes, usually parallel to the architrave with a pulvinus connecting a pair on each side of the column, and an entablature typically consisting of an architrave of three fascias, a richly ornamented frieze, and a cornice corbeled out on egg-and-dart and dentil moldings, with the frieze sometimes omitted."
A Column on columns
Included in the lineup are the company's Rustic Fluted Column and Rustic Taper Candles.
NORTHERN LIGHTS DEBUT AT GOURMET
Superior Aluminum has added square fluted column design to its product line.
Sears PartsDirect Launches Commercial Web Site
Basins with fluted column pedestals and shaped backs inspired by Victorian originals, and classic, clean-edged, stepped designs of the Deco period can be found in the high street and in superstores.
WASH THIS SPACE; Brilliant new hand basins are cleaning up in the style game
Departing more radically from its referent, one image from "Bridal Suite" transformed the wedding gown, an elegant pleated affair, into a fluted column. Though this dress is the subject of a group of close-ups that form part of the larger series, nowhere does it feel like a stand-in for the bride who is busy placing the garment, either encased by or bereft of its protective plastic cover, in various poses.
Tanya Marcuse