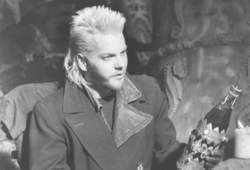 Kiefer Sutherland plays David, the leader of the Lost Boys in the 1987 film. These modern vampires had the ability to fly.

Some vampires had the ability to fly. Flying was quite common among Asian vampires. For some, such as the penanggalan vampire of Malaysia—who flew about as a head and neck and a set of dangling entrails—it was essential. As some Chinese vampires grew older, they transformed into flying creatures. In general, European vampires did not fly, though they were known to levitate. Other vampirelike creatures, such as the banshee—the wailing spirit—flew. The European vampire’s ability to fly generally was tied to its transformation into a creature, such as a bird or bat. The ancient Roman strix, originally a screech owl, was later identified with the vampiric witches of Italy. The witches were believed to have the power to change into a crow or an owl so they could move about more quickly. Once the vampire was identified with the bat, most thoroughly in the novel Dracula (1897), its mobility became greatly extended. The West African vampire, which goes under various names such as the obayifo and asiman and which reappeared in the Caribbean as the loogaroo (Haiti), sukuyan (Trinidad), and asema (Surinam), regularly changed into a flying ball of light. In this form it could be seen in the night sky. A vampire of this sort, who lived otherwise as a member of the community, would enter the flying state by taking off its skin. After feasting, it often would assume the shape of an animal, at which time it could be chased and, if caught, wounded or killed. Most vampires of twentieth-century literature and motion pictures flew only by making a transformation into a bat. In movies, the bat became a recurring problem to be handled by steadily improving special effects departments. Occasionally the solution would involve the camera taking the bat’s perspective so that the audience saw the same view as the bat, but not the bat itself. This bat’s-eye view was used effectively in the movies Innocent Blood (1992) and Dracula Rising (1992).

Those vampires that denied the ability to transform into a bat or other flying creature seemed destined to remain earthbound, and in most cases, have been so limited. The vampires in Anne Rice‘s novels were an exception. Though without any ability to transform into an animal form, they flew, at least in a limited way. Lestat de Lioncourt discovered this when he encountered Magnus (his creator), who picked him up and flew him to the top of a nearby building. The first major movie with vampires flying in their human form was The Lost Boys (1987), which included a scene in which two airborne vampires fought each other. More recently police officer Nick Knight, the lead character in the television series Forever Knight, occasionally took to the air in order to catch a criminal suspect.

For those who saw the vampire more as a supernatural creature, its flying ability represented no great extension of its magical powers. The vampire was frequently linked to witches, who magically flew to their sabbats on a broom. However, as the vampire became a creature of nature, and the vampiric condition related to a disease or a blood condition, its ability to fly was seen more as an unbelievable extension of natural powers. In more recent vampire movies and television series, the ability to move at great speed, is demonstrated by Nick St. John in the television series Moonlight, Bill Compton the 173-year-old vampire in True Blood, and Edward Cullen in the movie Twilight.