[flīsh]
(geology)
Deposits of dark, fine-grained, thinly bedded sandstone shales and of clay, thought to be deposited by turbidity currents and originally defined as rock formations on the northern and southern borders of the Alps.
McGraw-Hill Dictionary of Scientific & Technical Terms, 6E, Copyright © 2003 by The McGraw-Hill Companies, Inc.
The following article is from The Great Soviet Encyclopedia (1979). It might be outdated or ideologically biased.

a thick sequence of marine sedimentary rocks, primarily detrital in origin, characterized by a cyclic alternation of several lithologic varieties of graded beds with finer grains toward the top, regardless of mineralogical composition. Flysch consists of many thin cycles that are only several centimeters to several decimeters deep (Figure 1). The cycles are also called cyclothems, cyclosomes, or multiple beds and are sometimes inaccurately referred to as rhythms. 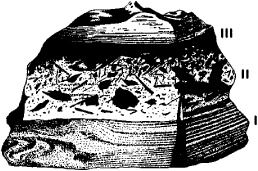 The cycles are formed by two to four beds. The underlying beds consist of granulites, such as sandstone, aleurolite, and cal-carenite, and often display cross-bedded and irregular sediments; the overlying beds are composed of pelites. Hieroglyphs of various shapes and origins are typical on the lower surface of the cycles. Some of the hieroglyphs are the impressions of irregularities on the floor of the body of water; the irregularities resulted from the erosional action of short-lived turbidity currents and from the vital activity of various animals, mostly worms, that crawled along the bottom. Fucoids, which resemble algae in shape and are at least as characteristic of flysch as are hieroglyphs, owe their origin to worms.

The cyclic nature of flysch is caused by specific features of the accumulation of sediment, that is, by more or less periodic turbidity currents.

Flysch is a typical geosynclinal formation that marks the pre-orogenic phase of the development of eugeosynclines, miogeo-synclines, or both. In the preorogenic phase, a cordillera emerged along a flysch trough. A cordillera is a long chain of islands on the slope of which wildflysch and coarse-grained wildflysch formed. Wildflysch is associated with submarine landslide formations, and coarse-grained wildflysch is enriched with conglomerates and sandstone. Away from the source, the wildflysch is typically replaced by flysch, which in turn is replaced by immature flysch and semiflysch, or subflysch (Figure 2). In a vertical sequence of geologic formations, flysch occupies an intermediate position between slate formation and molasses. In folded regions that arose at the sites of geosynclines, strongly dislocated flysch deposits constitute the outer part, or the externides.

Figure 2. Flysch in a sequence of adjacent formations

Deposits of petroleum and mineral water are correlated in time with flysch. Carbonate flysch and subflysch are sometimes good raw materials for cement. Such flysches are found, for example, in the Novorossiisk region.