an internal combustion engine with an operating cycle consisting of four piston strokes that occur in the course of two revolutions of the crankshaft. 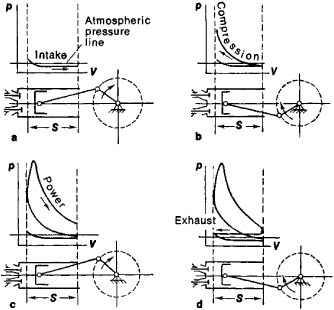 The intake, compression, and exhaust strokes are accomplished by means of the kinetic energy stored during the power stroke in the crankshaft and in the parts connected to it when the chemical energy of the fuel is converted into the mechanical energy of the moving parts of the engine.

Figure 1 shows the dependence of the pressure p in the cylinder of a four-cycle engine on piston position in each stroke.

Feedback
Flashcards & Bookmarks ?
Please log in or register to use Flashcards and Bookmarks. You can also log in with
Flashcards ?
My bookmarks ?
+ Add current page to bookmarks
Mentioned in ?
References in periodicals archive ?
The problem is, Can these operations be adequately performed without detriment to the engine in one up and down stroke of the piston as in the two-stroke cycle, or is it necessary to be so conservative as to take four strokes of the piston as in the case of the four-cycle engine? ...
The diesel engine for rail transportation: an engineer for the company that was supplying engines for some of the era's advanced trains looked at a key question of diesel design: two strokes or four?
The Honda four-cycle engine has a heavy-duty clutch mounted on a rugged steel frame with a flexible throttle and kill switch.
Backpack vibrator
The BX-60WH is powered by a Honda four-cycle engine at 3,600 revolutions per minute, and with recoil start engineered to provide years of dependable operation.
2014 ConFxpo Sneak PeaK. See What"s In Store For The Underground Market
If it is compared a Wankel rotary engine with an internal combustion four-cycle engine, having the same cylinder capacity, which at a certain number of rotations develops the same power, we conclude: a Wankel rotary engine is equivalent to an internal combustion four-cycle engine having two cylinders.
A new approach in workspaces analysis for rotary engines case
A Jake brake, when applied, opens an engine's exhaust valves at top dead canter, thus releasing that cylinders compression and causing a huge drag on each piston as it goes downward on what would be the power stroke of a four-cycle engine. Engine software can be programmed for the brake to kick in any time the engine is running against compression without the drivers foot on the gas.
Engines, transmissions and axle ratios define a truck
External gas tank access, 25-inch self-cleaning Stryker off-road tires, Honda 614cc, 18 hp four-cycle engine, rotomolded polybed and passenger grab-bar are just a few of the extras--all standard--you'll get with this great two-passenger utility vehicle.
2006 ATV buyer's guide: getting there; Utility vehicles get you back in, and back out
In spite of remaining a four-cycle engine, there are no inlet or exhaust valves, for instance (see the diagram herewith).
Steroids for drones
The firm's first "tractor" had a 17-30-hp, two-cylinder, horizontal four-cycle engine with 9-by-13-inch bore and stroke.
"Parr" for the course: Hart-Parr Co. set the standard by introducing "tractors" to the farm
Annual demand in Iran for motorcycles with a four-cycle engine is estimated at 50,000 units, with Japan's Honda Motor Co., Yamaha Motor Co.
Suzuki to start motorcycle production in Iran
From the implication (8) we conclude: a Panu-Stanescu rotary engine is equivalent to an internal combustion four-cycle engine having twelve cylinders.
The determination of the volume function variation of Panu-Stanescu rotary engine
The first Type S was a vertical, four-cycle engine that was hopper-cooled and produced 2- 2 1/2 hp.
"No tank, no fan, no freezing": Novo engine keeps collector's memory alive