Jack the Ripper, name given to an unidentified late-19th-century murderer in London, England; also known as the Whitechapel Murderer and Leather Apron. From Aug. to Nov., 1888, he was responsible for the death and mutilation of most likely five impoverished women in the East End section of London, but of the 11 murders investigated the number of Ripper murders may be as low as three. The victims, who were portrayed as prostitutes (though only one of the five definitively was), had their throats slashed and their bodies mutilated in ways that appear to indicate anatomical knowledge, perhaps medical training. Panic ensued, and the inability of the police to stop the crimes, coupled with the authorities' receipt of taunting letters (possibly hoaxes) signed “Jack the Ripper,” brought on scandal and eventual reforms. The murders ended as suddenly as they had begun. Over the years the killings have been ascribed to such varied persons as a Russian sailor, a doctor, a woman, a man in woman's clothing, a well-known painter, or a member of the nobility or even the royal family. The crimes have given rise to many novels, plays, and other dramatic works.
The Columbia Electronic Encyclopedia™ Copyright © 2022, Columbia University Press. Licensed from Columbia University Press. All rights reserved.
The following article is from Conspiracies and Secret Societies. It is a summary of a conspiracy theory, not a statement of fact. 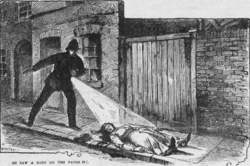 According to some researchers, the always morbidly fascinating Jack the Ripper was a member of the British royal family.

Although even the number of murders attributable to the infamous Jack the Ripper is debated—the count runs as high as fifteen—there is a general consensus that the series of slayings began in the White Chapel district of London’s East End with the murder of Mary Ann Nichols on the night of August 31, 1888, and ended nine weeks later with the gruesome slaughter of Mary Jeanette Kelly.

Mary Ann Nichols was found lying across a gutter, repeatedly slashed by someone with a long-handled knife and a general knowledge of anatomy. A week later Annie Chapman was found in a backyard, her head nearly severed. A few nights later the Ripper was interrupted in his attack on a local celebrity known as Long Liz by a man who drove a pony cart into the yard. The pony shied at the fleeing figure of Jack, and the driver jumped down from his seat to lift the woman’s head. Blood poured from the open wound in her throat, and it was evident that she was beyond help. Apparently the intrusion so annoyed the Ripper that within an hour he lured Catherine Eddows into a lonely alley where he could indulge his perverse and deadly passions at his leisure. Jack extracted her left kidney and certain other organs, then wiped his hands and knife on her apron.

The London newspapers ran countless stories speculating about the Ripper’s identity. Perhaps he was a demonic butcher, a Polish Jew, an American sailor, a Russian doctor, or one of a host of other suspects—anyone, it seemed, so long as he was not English. Jack, who was obviously following his press quite carefully and enjoying every inch of ink in the papers, countered with a famous quatrain he sent to the Times:

I’m not a butcher; I’m not a Yid,
Nor yet a foreign skipper;
But I am your own true loving friend,
Yours truly—Jack the Ripper.

The Ripper corresponded with Scotland Yard as well as the London press. To a persistent police officer, whose investigation was evidently well known to the Ripper, he sent part of a human kidney. “I have fried and eaten the other part,” he stated in an accompanying note.

Jeanette Kelly was the only victim killed indoors. She had been heard singing “Sweet Violets” during the evening and had seemed to be in high spirits. Her horribly mutilated corpse was discovered the next morning by a passerby who could look directly into her ground-level apartment. Sir Melville Macnaghten, a Scotland Yard official, reported that the Ripper must have spent at least two hours over his hellish work: “A fire was burning low in the room, but neither stove nor gas were there. The madman made a bonfire of some old newspapers and of his victim’s clothes, and by this dim irreligious light, a scene was enacted which nothing witnessed by Dante, in his visit to the infernal regions, could have surpassed.”

The only possible description we have of Jack the Ripper came from someone who saw Jeanette Kelly in the company of a man “about thirty-five years old, five-feet six inches tall, of a dark complexion, with a dark mustache turned up at the ends.”

Abruptly the murders ceased, but theories about the now morbidly romanticized Ripper continued to afford challenges for amateur detectives at the local pubs and painstaking police work for tough-minded Scotland Yard inspectors. Someone with a knowledge of surgery always ranked first in the theoretical list of suspects. The second favorite was a midwife who had both familiarity with her victims and a knowledge of elementary surgery. A journalist reported the death of a diabolical doctor in Buenos Aires who allegedly made a deathbed confession that he had been Jack the Ripper, but his claim was impossible to document.

The notorious Dr. Neill Cream, convicted of poisoning four women, shouted, “I am Jack the—” just as the executioner pulled the lever on the hangman’s platform and dropped the doctor to the end of his rope. Eager devotees of the Dr. Cream solution to the Ripper legend were disappointed when their investigation revealed that Cream had been in Joliet prison in Illinois throughout the period of the East End murders.

The best-selling crime writer Patricia Cornwell spent a great deal of money attempting to prove her theory that Jack the Ripper was the painter Walter Sickert, an artist whose moody and unsettling paintings generally featured Irish music-hall entertainers and scantily clad women of the night. Alistair Smith, director of the University of Manchester’s Whitworth Art Gallery, pronounces Cornwell’s theory as presented in her Portrait of a Killer: Jack the Ripper—Case Closed (2002) utter nonsense and points out that the art historian Matthew Sturgis discredited Cornwell’s research in his own critically acclaimed Sickert biography.

Other recent theories about Jack’s identity have even included HRH Prince Albert Victor, Duke of Clarence, the grandson of Queen Victoria. “Prince Eddy,” as he was known, was the son of Prince Albert Edward (later King Edward VII) and Princess Alexandra. Prince Albert, “Bertie,” was a bit of a rogue, involved in a number of scandals that had to be hushed up by the palace. On the other hand, Alexandra was much like Princess Diana, respected for her public works and much loved by the people. Rumors that Eddy was dull, even retarded, began when he was a child. The boy was also partially deaf.

Prince Eddy was named Duke of Clarence in 1891 and would likely have been king of England if he had not died in the influenza epidemic of 1891–92. At the time of his death, he was engaged to Princess Mary of Teck, who did become Queen Mary.

Although people gossiped about Eddy’s bizarre lifestyle, there were no rumors linking him to the awful murders committed by Jack the Ripper during his lifetime. It was not until 1962 that Philippe Julien, author of Edouard VII, published the allegation that Eddy and the Duke of Bedford had been responsible for the Ripper slayings.

In 1970 Dr. Thomas Stowell created a sensation when he published an article in the Criminologist claiming that Eddy, driven mad by syphilis, committed the murders. In this theory, the royal family was fully aware that Eddy was the Ripper but did nothing until after the double murders of Long Liz and Catherine Eddows on the same night. Eddy was then bundled off to a private mental hospital, but he escaped and committed the gruesome murder of Jeanette Kelly. (Eddy’s terrible skill with a knife, so Stowell’s theory goes, came from his experiences at dressing deer on the hunt.) Once again, the royal family had Eddy quietly confined in a mental hospital, where he resided until he died of syphilis attacking his brain.

Stowell’s conspiracy theory about Prince Jack the Ripper reads convincingly and terrifyingly. To refute such claims, royal records were released that show Prince Eddy was not even in London on the important murder dates.

The forensic psychiatrist David Abrahamsen profiled Jack the Ripper and concluded that Prince Eddy was an accomplice in the murders. Other Ripper theories touching on the royal family have involved Queen Victoria, a secret wife of Eddy’s, and elaborate Freemason rituals. Like many other conspiracies that develop a life of their own, that of Prince Eddy the Ripper will no doubt continue to add many branches to the main trunk.